Monday, March 15, 2021
MST Occupations and Demonstrations
Brazilian Politics Society and Economy
Oppression of MST and Social Movements
Info Source:
From the MST Page | By Solange Engelmann and Maura Silva | Translated by the Friends of the MST (US) | https://mst.org.br/2021/03/15/atos-contra-impunidade-do-caso-marielle-franco-encerram-jornada-de-luta-das-mulheres-sem-terra/

In 24 states and the Federal District, MST Women also denounced the increase in hunger, the destruction of Agrarian Reform policies, the increase in violence and promoted the “Out with Bolsonaro” campaign 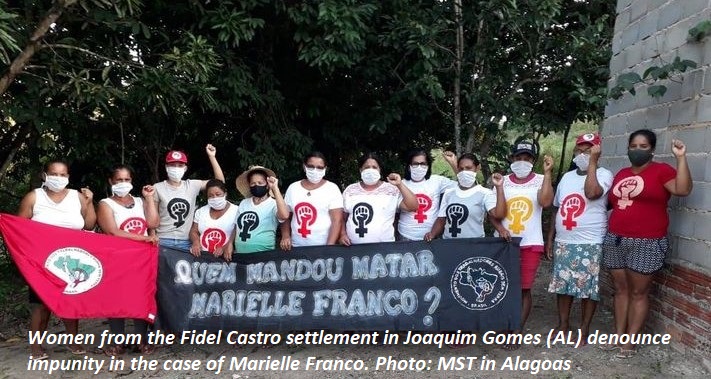 Who had Marielle Franco killed? With this and so many other questions still unanswered, the 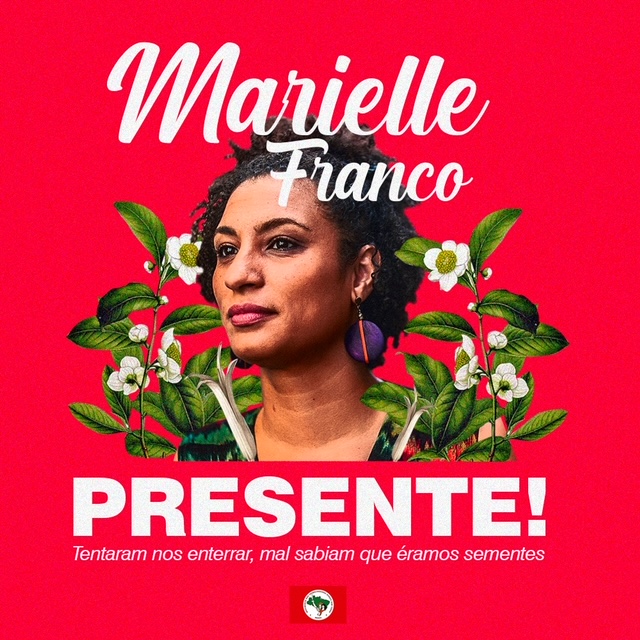 Landless Women end the actions of mobilization, solidarity and affection of the National Day of Struggle for the Landless Women, held for a week, from March 8th to 14th.

The actions spread across 24 states and the Federal District. Among the places where it was possible to promote activities with social distance, the peasants donated more than 52 tons of food and products from Agrarian Reform and delivered about 4 thousand lunch boxes to people in vulnerable situations. They also organized more than 120 people who donated blood and life in blood banks and blood centers and planted more than 9,600 tree seedlings, collaborating in the preservation of biodiversity and soil across the country. 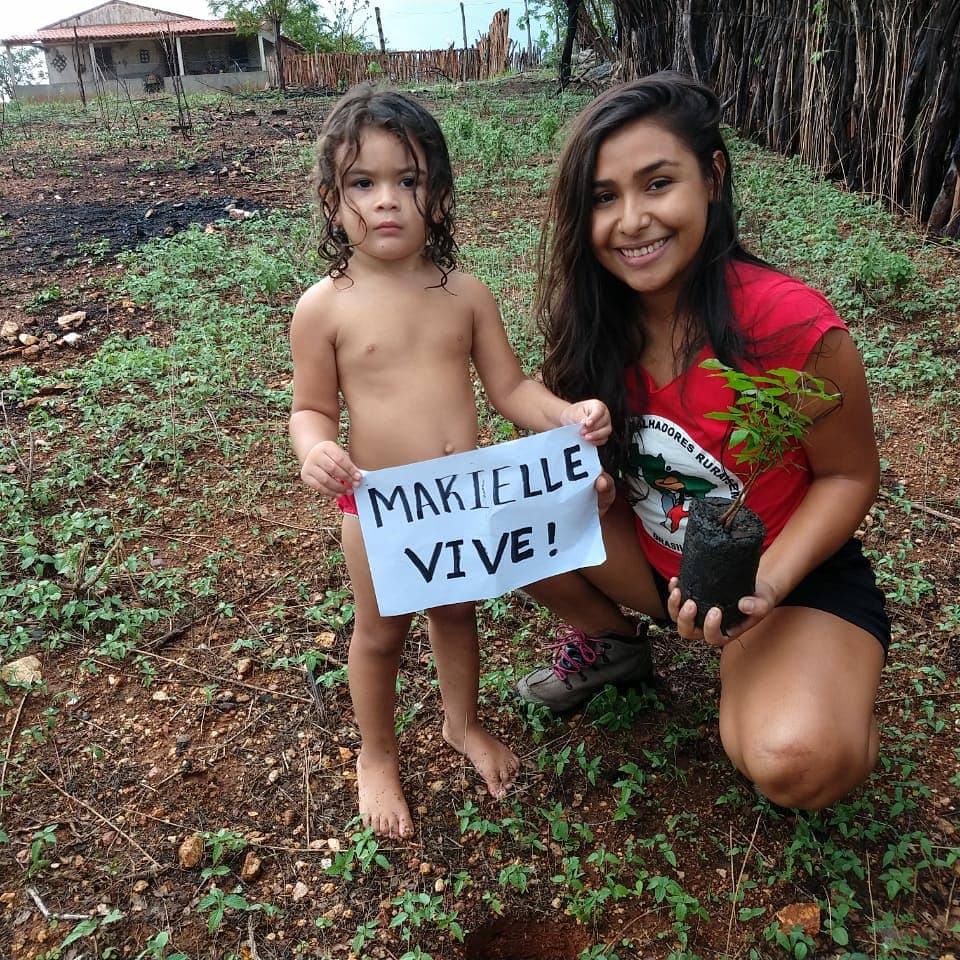 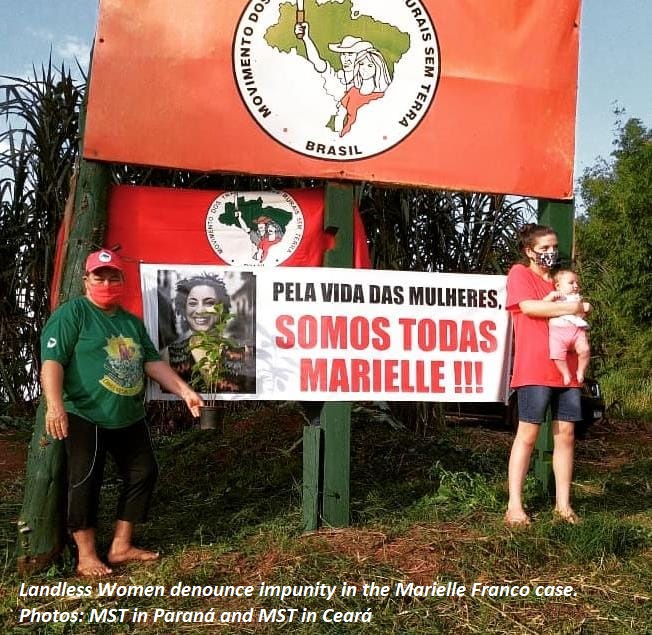 On Sunday (March 14), after completing three years of impunity for the murder of Marielle Franco, councilor of Rio de Janeiro from the Party  of Socialism and Freedom (PSOL), and her driver Anderson Gomes, the peasants demanded justice for the case of the councilwoman who fought for rights of blacks, women, slum dwellers, Lesbian, Gay, Bisexual, Transvestite, Transsexual and Transgender people (LGBTs), and the population made invisible by society's exclusion and prejudices. The various actions carried out in several states ended the Journey of the Landless Women, with the motto “Women for life, sowing resistance against hunger and violence”. 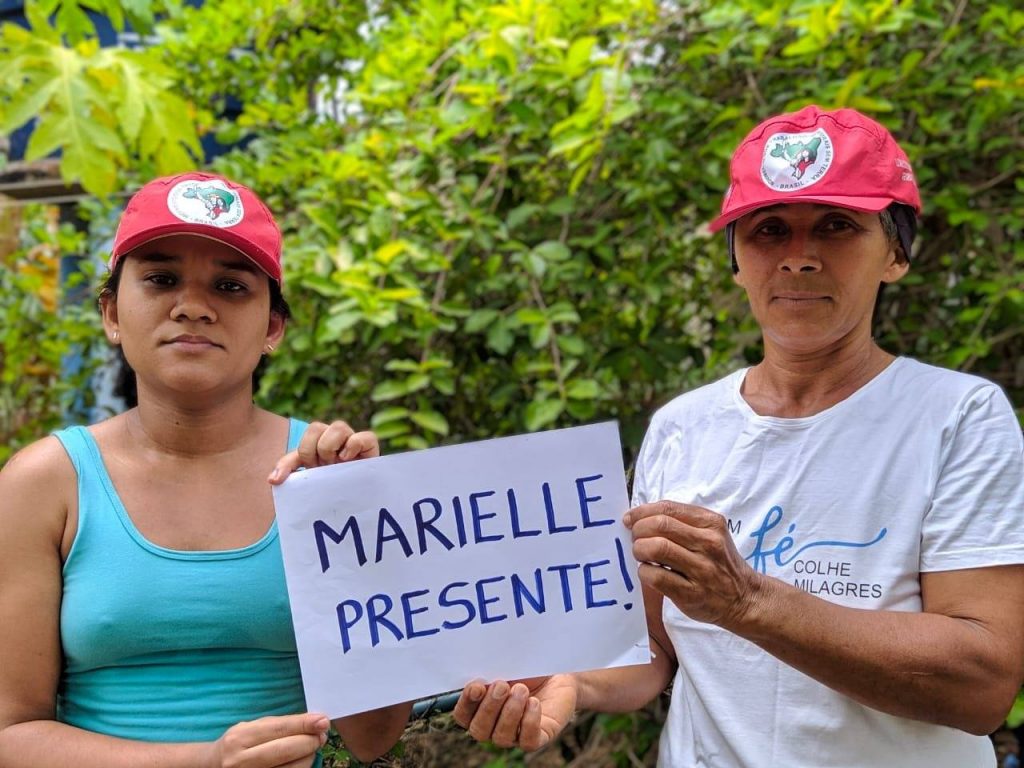 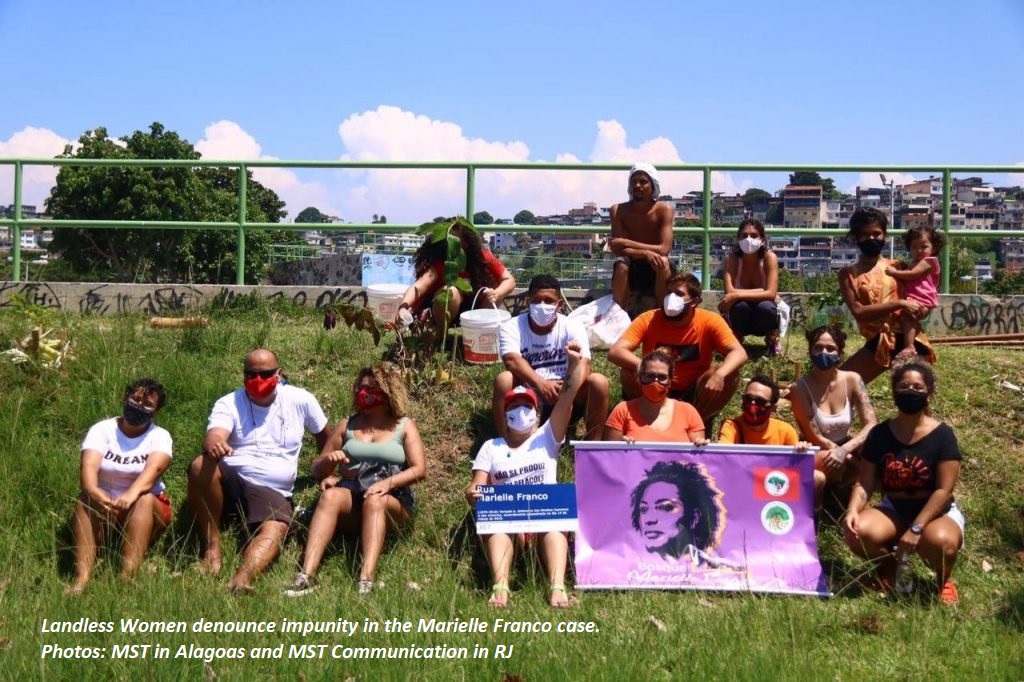 “Women in the MST make public their repudiation against this violence, plus all those who have taken the lives of hundreds of women every day,” say the peasants.

Based on solidarity, with food donations for vulnerable families in various peripheries in the country, the Day of Landless Women denounced the increase in hunger in Brazil and the destruction of Agrarian Reform policies, the increase in violence against women, the Bolsonaro government's death policy and agribusiness.

“We denounce agribusiness, the companies that profited from the pandemic and from hunger; the genocidal project of the Brazilian government in the face of the pandemic and the paralysis of Agrarian Reform (our only alternative to face the hunger of the Brazilian people); and we denounce the violence against women and the cases of femicide, which has been increasing in this context of a pandemic,” explains Claudete de Souza, based in the Zumbi dos Palmares settlement, in Iaras (SP) and the National Directorate of the MST. 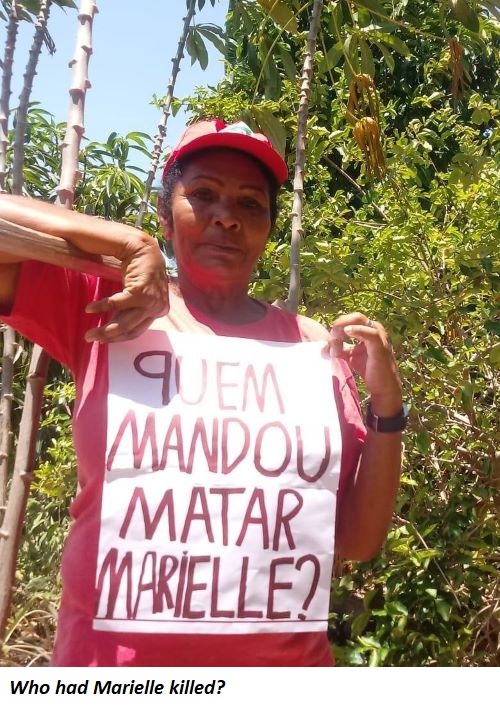 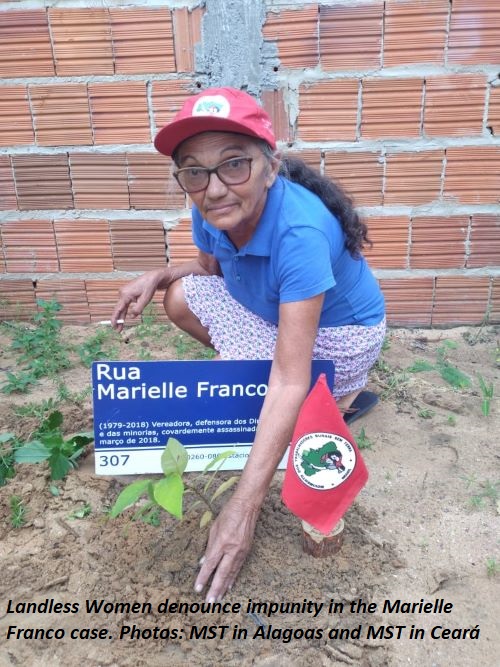 With actions carried out in accordance with the reality and conditions in each state and place, in defense of life, the Sem Terra also demanded emergency aid for rural workers and mass vaccination of the entire Brazilian population.

“The activities had as a central focus the fight against hunger, violence, dialoguing with the broader agendas of Bolsonaro Out!, vaccination now, in defense of SUS [Unified Health System], the return of emergency aid, with special credit for the family farming. And we continue to denounce and face the violent actions of capital, patriarchy, racism and that genocidal government,” emphasizes Maria da Silva, based in the João Pedro Teixeira settlement, in Serra Talhada, in the Sertão do Pajeú (PE), who is part of the gender sector and the National Directorate of the MST. 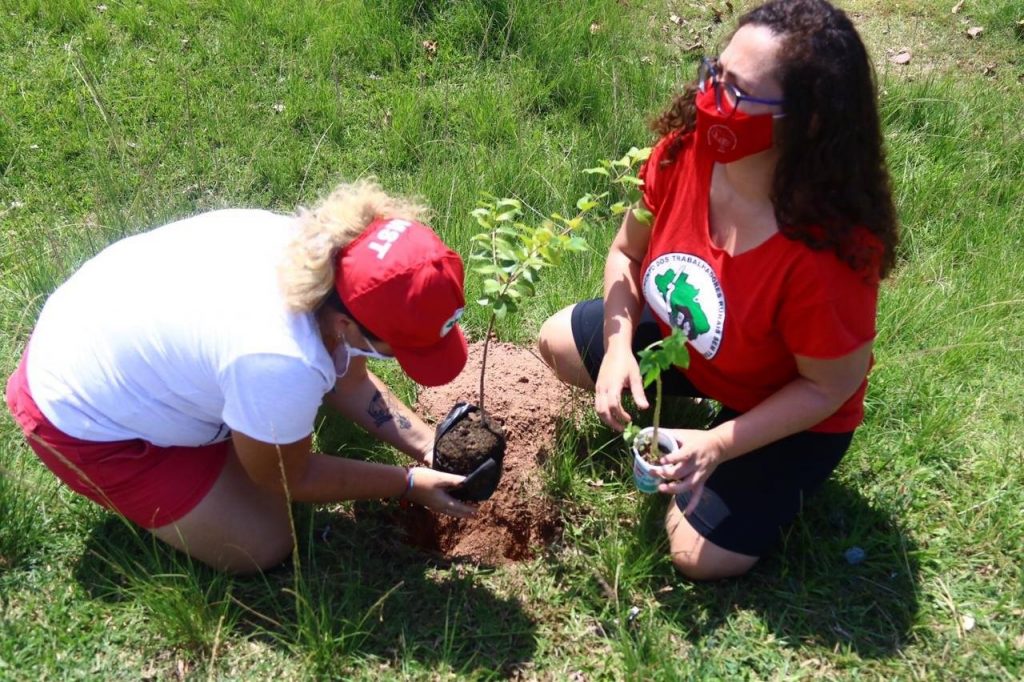 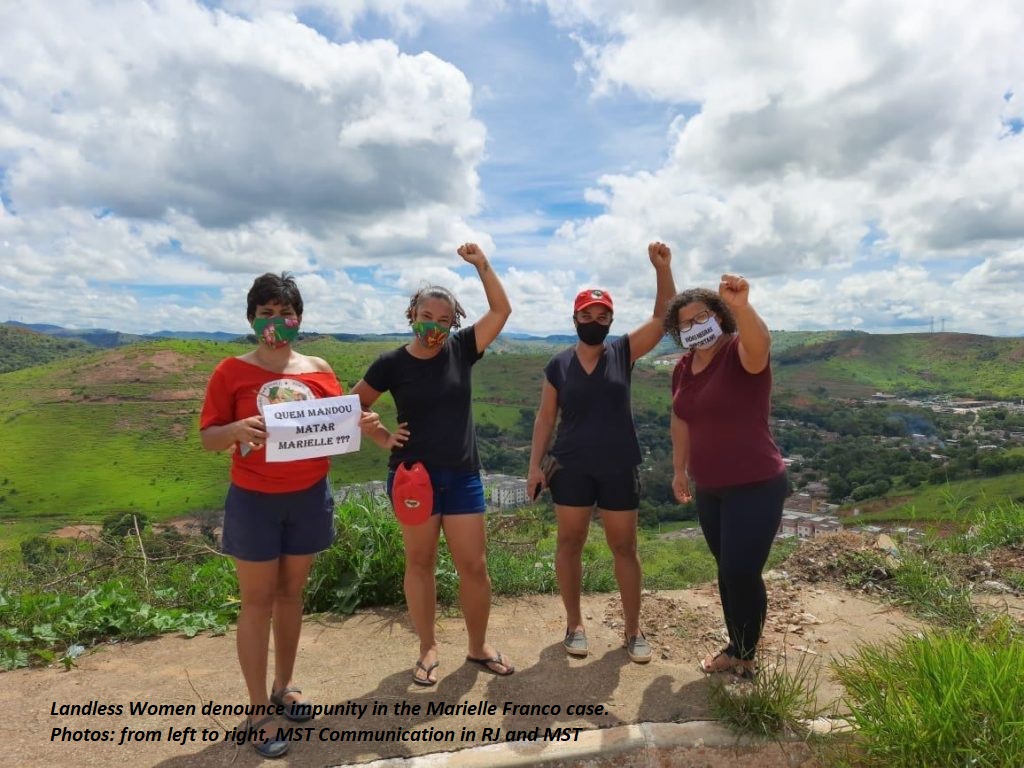 This year, due to the Covid-19 pandemic, the peasants carried out symbolic and decentralized activities, with a lot of mística, denunciations, training and solidarity across the country, ensuring social distance and following care protocols.

“With the increase in hunger and violence, we women in the MST understand that we need to take care of ourselves, but that we cannot be silent. In the week of March 8, articulated with other women from the fishing communties, from the countryside, from the forests and in the city, with women from the popular countryside, we realized the donation of food to maintain healthy blood, motorcades, online cultural activities, production of videos for dialogue with society and food donation. And the planting of trees, strengthening the campaign “Planting trees, producing healthy food,” reports Claudete.

With the country immersed in the pandemic for more than a year and the need for social isolation to preserve lives, in addition to the growth of hunger, there was also an increase in violence against women – one part of the public most affected in the pandemic. Rural women, for example, had their working hours doubled or even tripled, with the care of crops and animals, domestic work and care for children and the elderly.

Data released on March 7 by the Ministry of Women, Family and Human Rights (MMFDH) show that 105,671 reports of violence against women were registered in 2020. It reaches an average of 12 reports per hour. 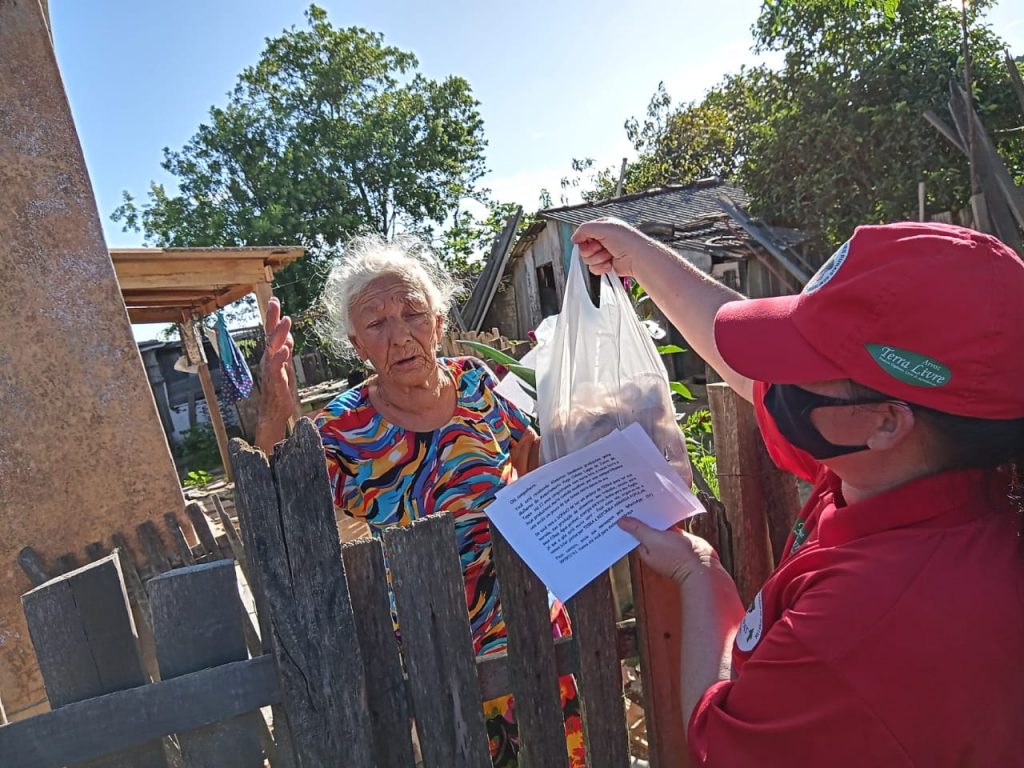 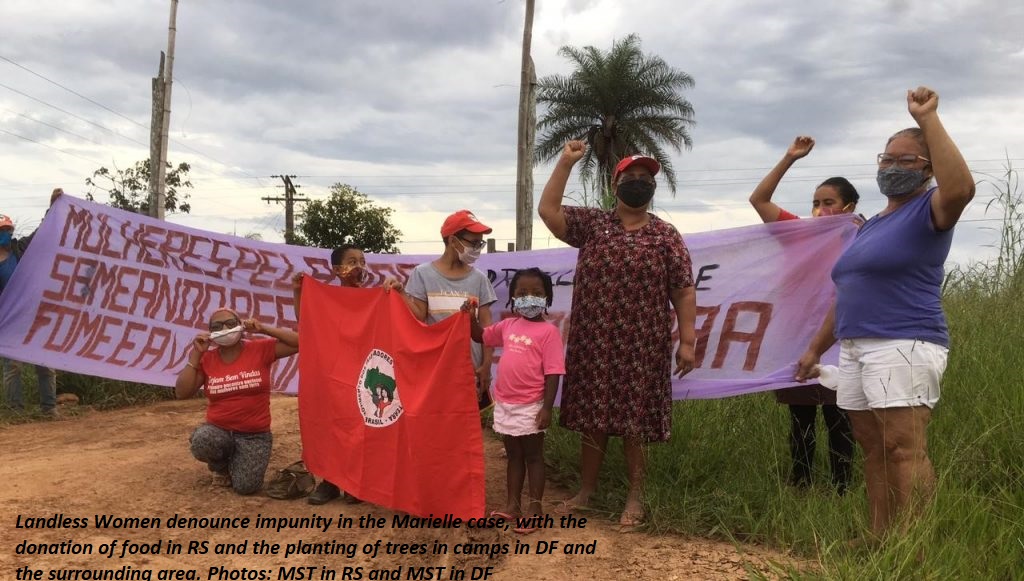 As an alternative to face this scenario, Maria da Silva points out that rural and city workers need to continue making complaints on social networks and charging representatives in power – federal and state deputados and senators - for the creation of bills that promote benefits to the working class, and seek to alleviate violence in the countryside and in the city.

Among the various lessons and learnings of the Day de Struggle, Claudete draws attention to the need to advance in popular peasant feminism, as an important strategy in the Brazilian class struggle. “The day showed the capacity and the need of working class women, especially Landless women, to resist and continue to reinvent themselves, in the construction of popular peasant feminism,” she concludes.

Check out the actions for justice to Marielle in each state:

At the Pedagogical Unit of agroecology at the Edson Nogueira encampment, in Macaé (RJ), a conversation circle recalled Marielle Franco's life and her trajectory as a defender of Human Rights.

At Aterro do Cocotá, on Ilha do Governador, the Marielle Franco Forest was inaugurated, celebrating her memory with the hope that the seeds will continue to flourish.

In the Dandara dos Palmares settlement, in Campos dos Goytacazes, a forest was opened with trees of Ipé [a Brazilian hardwood], avocado, orange, lemon, pomegranate and coffee. The Pastoral Land Commission (CPT) and Sindipetro [Petroleum Derivatives Retail Trade Union] participated in the inauguration.

In Governador Valadares, the intervention action on the street was postponed due to the critical moment that the city faces, with the occupation of 100% of the ICUs for Covid-19. But the solidarity action took place guaranteeing the safety of the community. Donations of food from family farming and clothing were made to the residential Sertão do Rio Doce community.

The popular resistance settlement Maria Aparecida, located on the north coast of Rio Grande do Norte, paid tribute to councilwoman Marielle Franco, putting her name on the main street of the settlement.

On Sunday morning (March 14), the Landless Women from the Noelton Angélico, Oscar Niemeyer and Zé Pereira encampments in Brazilândia, and from the 8th de Março and Roseli Nunes encampments in Planaltina, DF, planted trees, sowing the legacy of the councilwoman.

Landless Women from Paraíba also planted trees in memory of Marielle Franco. It's been three years of sowing resistance.

In the Metropolitan region of Porto Alegre, in Tapes, women from the Hugo Chaves settlement donated 400kg of Agrarian Reform food produced by themselves. In total, 100 baskets were delivered with bread, biscuits, rice, seasoned salt, pumpkin, lettuce, chives, parsley, pepper, all organic; and homemade soap.

This Sunday (March 14), to rescue Marielle Franco's legacy, the peasants from the North of Paraná region planted the 'Marielle Gardens' and end the 2021 Day of Struggle of Landless Women. Flowers, medicinal herbs and native and fruit trees were planted in the Fidel Castro, Zilda Arns, and Manoel Jacinto encampments and the Eli Vive 1, Eli Vive 2 and Maria Lara settlements, in northern Paraná.

This Sunday (March 14), the activities of the Day of Struggle of Landless Women in Pará ended with the Virtual Festival: For the life of women and territories, in memory of Marielle Franco. The activity was organized by the Feminist Front of the state and transmitted through the Front’s  page on Facebook, with cultural presentations, dance, poems of renewal and sharing of feminist articulation. 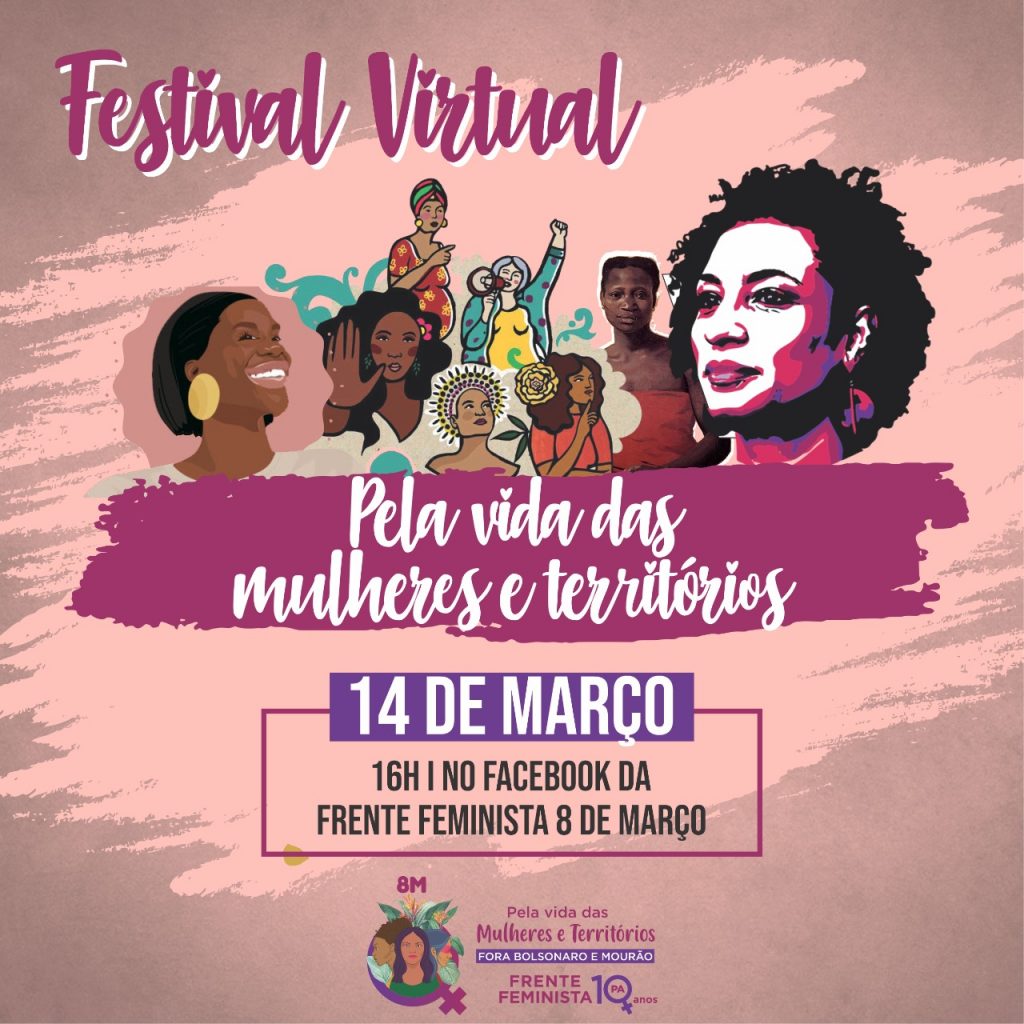 See more images of the MST's Landless Women's Day 2021 at this link: https://mst.org.br/2021/03/15/atos-contra-impunidade-do-caso-marielle-franco-encerram-jornada-de-luta-das-mulheres-sem-terra/