With actions throughout Brazil, Cry of the Excluded denounces Temer’s attacks on rights and democracy

Thousands of people took to the streets this September 7th under the motto: "For rights and democracy, the struggle is every day" 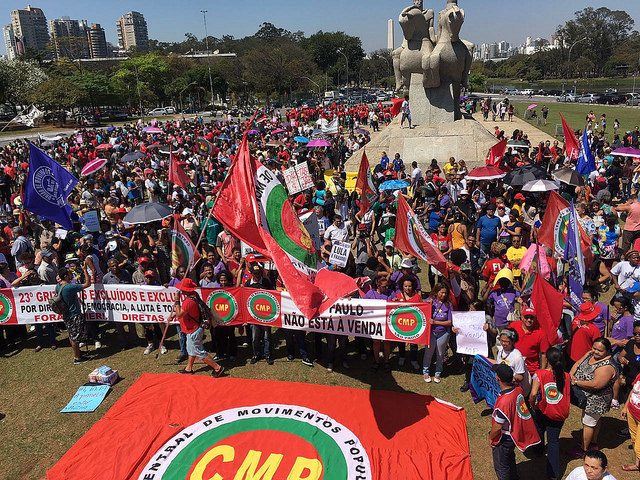 On this holiday of September 7, popular movements and sectors of the Catholic Church organized the traditional Cry of the Excluded in various cities across the country. In the 23rd edition of the action, the protesters went the streets under the motto: "For rights and democracy, the struggle is every day".

In the capital of São Paulo, around 15,000 demonstrators walked from Oswaldo Cruz Square, on Paulista Avenue, to the Bandeiras Monument, in Ibirapuera. According to Raimundo Bonfim, coordinator of the Central of People’s Movements (CMP), this edition of the Cry of the Excluded was marked by the fight against setbacks, among them the increase of poverty and hunger.

The studies indicate that Brazil has already returned to the map of hunger, in this moment there are 14 million unemployed. In this sense, it is with sadness that we are performing this Cry of the Excluded. But at the same time with hope, because we are organizing the popular movements, doing a basic work so that we can make this denunciation, of this fiscal adjustment, of this attack to the rights and attack in all the scopes, of the federal government,” affirmed Bonfim.

In Rio de Janeiro, the act was carried out in the center, after the military parade. In addition to the national conjuncture, the Cry of the Excluded denounced the economic and financial crisis of the state, as Tobias Farias, one of the coordinators of the demonstration affirms:

"Rio de Janeiro is marked by a terrible process of exclusion. We understand that it is a laboratory of badness that happens, it was like that with the [World] Cup, it was like that with the Olympics, this laboratory of badness had Sérgio Cabral as a mentor, today there is the Pezão who wants to privatize our state university. "

In Brasilia, demonstrators gathered near the Esplanade of the Ministries, while Temer participated in the official 7 September parade with the military. According to Sueli Belato, of the Justice and Peace Commission of the National Conference of Brazilian Bishops (CNBB), the cut in the rights of the workers of the coup government is unprecedented.

"We do not elect any deputy, no senator, no president to make reforms that are being made and that they hinder the working class, within rights that are secular. Ever since Getulio Vargas had never seen such an aggressive blow against workers' rights," Belato points out.
Cities like Belém, Curitiba, Porto Alegre and Pernambuco also organized actions to denounce the setbacks of Temer.