Act for the Land mobilizes artists and social movements in Brasília

For the MST, the agendas highlighted by the Act also include the threat of evictions that thousands of families currently face across the country. 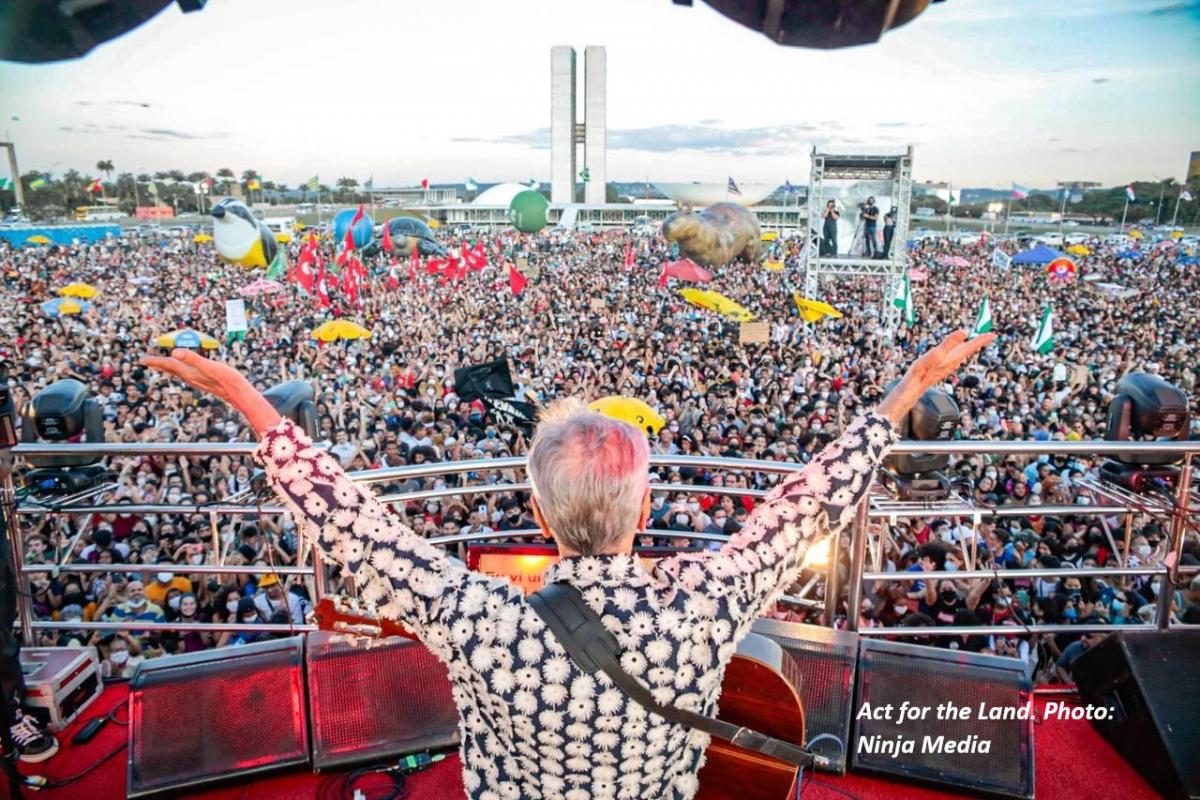 This Wednesday (March 9), about 50 thousand people followed the Act for the Land and against the destruction of the planet, which took place in Brasília, DF. The Act, whose main attraction was singer-songwriter Caetano Veloso, sought to pressure parliamentarians to reject five bills that undermine environmental licensing, facilitate land grabbing, authorize mining in indigenous lands, relax rules for the approval of pesticides and institute the “time frame” on indigenous lands.

In addition to the MST, organizations such as the Permanent Campaign Against Pesticides and for Life, Articulation of Indigenous Peoples of Brazil, Black Coalition for Rights, Movement of Homeless Workers, Central Única dos Trabalhadores, Climate Observatory, among others, participated in the Act. Among the artists, Daniela Gadú presents names like Seu Jorge, Baco Exu do Blues,

For the MST, the agenda highlighted by the Act also includes the threat of eviction that thousands of families currently face across the country. Through ADPF 828, the STF [Brazilian Supreme Court] suspended the suspension of all evictions, in the countryside and in the city, until the 31st of this month. If this deadline is not extended, according to the Movement, around 200 areas of MST encampments and pre-settlements are threatened with eviction.

“The Act for the Land has to defend the peoples of the land, waters, forests and urban populations,” said Kelli Mafort, from the MST’s national directorate, remembering the threats of evictions that thousands of families are facing in the countryside and in the city. “There will be 123,000 families evicted in the cities and around 30,000 in the countryside,” highlighted Mafort. 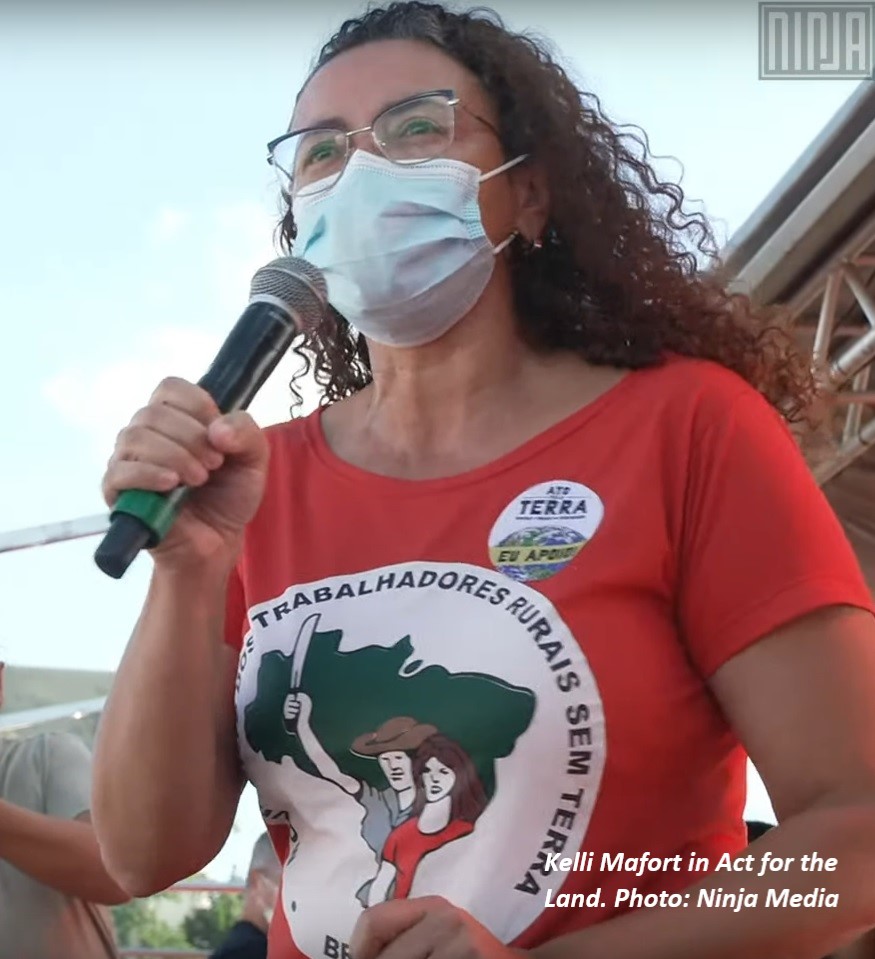 “We understand that the food on our table comes from family farming,” said Bela Gil, culinary artist and presenter, recalling the importance of family farming in food production.

Another highlight in the Act was the denunciation of the possibility of approving the poison package. “No one can take bad food, it's poison everywhere, it kills people and kills the river”, pointed out the leader.

“Science proves every day that there are pesticides in water, in breast milk, in our food,” said Karen Friedrich, a researcher at Fiocruz and a member of Abrasco's Health and Environment GT, who spoke at Act for the Land on behalf of the Campaign Against Pesticides for Life.

In February, by 301 to 150, the Chamber of Deputies approved the Poison Package (PL 6299/2002), in less than 4 hours of debate between the approval of the urgency request and the vote on the bill. With no popular participation, the project is now for consideration by the Senate. “We cannot allow this situation to get worse, and the PL on the poison will make it even worse, in the poisoning of our lives,” stressed Friedrich. 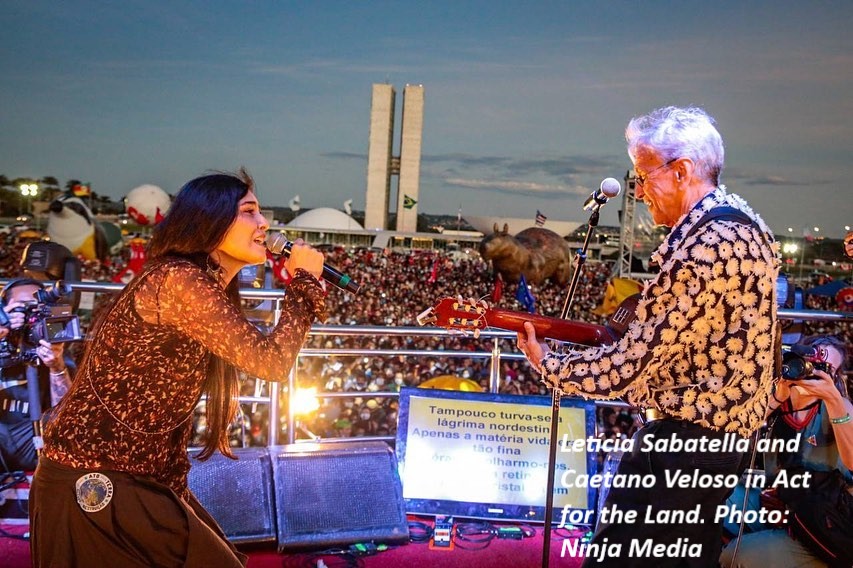 If approved, the PL will transfer all decision-making power for the approval of a new pesticide to the Ministry of Agriculture, Livestock and Supply, excluding key bodies in the evaluation and approval process, such as IBAMA [environmental agency] and Anvisa [health regulatory agency, and delivering the decision to a ministry historically controlled by ruralists.

In addition, it will enable the registration of carcinogenic substances that are currently prohibited due to proven health risks. Almost half (about 43%) of poisons released in Brazil occurred in the last three years, which has established the country as the world leader in the consumption of pesticides.

Several artists took a stand against Bolsonaro, agribusiness and its attacks on the environment 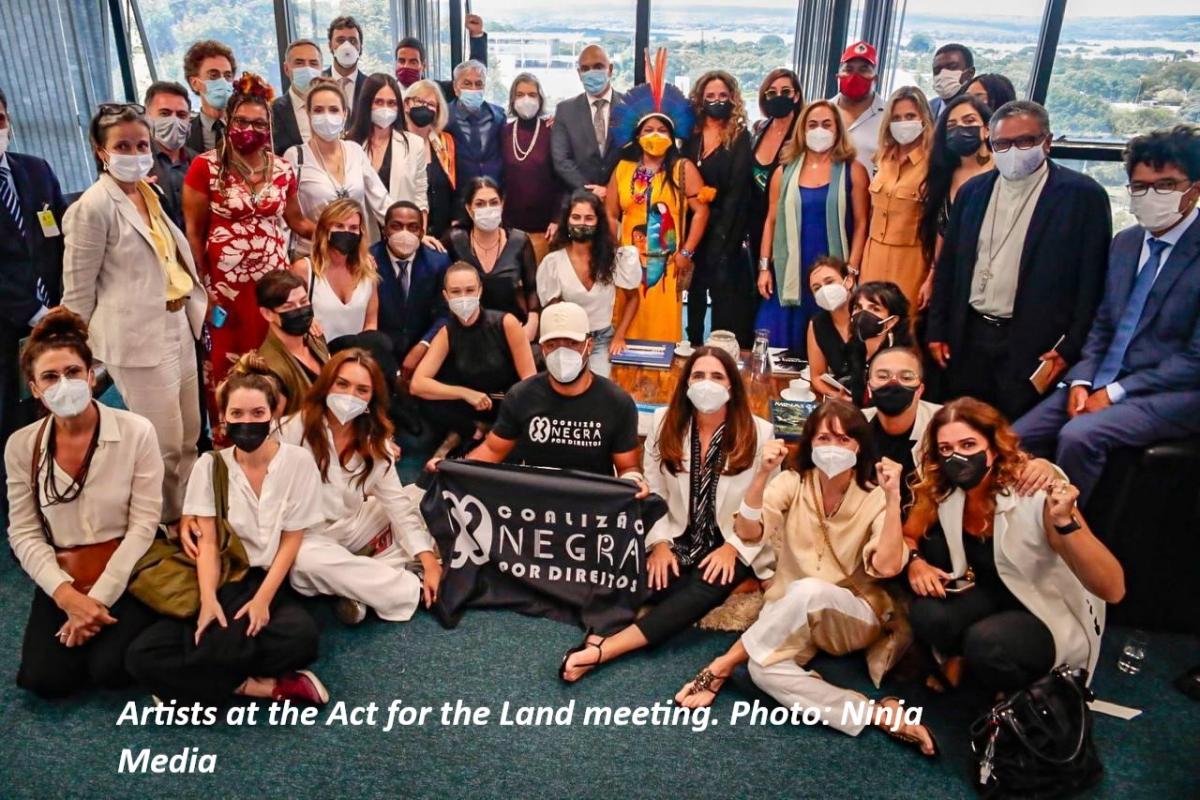 Lázaro Ramos, an actor from Bahia, highlighted the importance of this year for Brazil. “I really hope that this act here is a seed of what we are going to do this year, which is an election year, a very important year, and that we can be together to give our country a new path,” he highlighted.

Currently, two bills that are in Congress (PL 2,633 and PL 510) seek to facilitate the illegal occupation of public lands in the country. If approved, they could allow the regularization of illegally occupied areas at any time in history. PL 191, on the other hand, authorizes mining on indigenous lands. It works as a general release for large enterprises and mining on indigenous lands, increasing life, environmental, health risks and violence against indigenous peoples.

Emicida, rapper, singer and songwriter, reflected on the importance of art for the struggle of the working class. “Through Caetano's music I believed that I and the people who are born in this country deserve and will have a country that is worthy, where we build a reality with more equality, where we don't have to say the obvious: respect the indigenous people,” said the rapper.

PL 490 changes the demarcation of Indigenous Lands (TIs) and allows, among other things, the repossession of “indigenous reserves” by the Federal Government based on subjective criteria, putting at risk at least 66 territories inhabited by more than 70 thousand people. and covering a total area of ​​440 thousand hectares. Furthermore, it establishes that the demarcation can be challenged at any stage of the process and establishes the “Timeframe” for all demarcations of Indigenous Lands.

Letter to the STF and the Senate

About 40 artists and 6 popular organizations were received by four Ministers (Carmem Lúcia, Rosa Weber, Luís Roberto Barroso and Alexandre de Morais). During the hearing, a document was delivered denouncing the poison package and an appeal was made to the supreme court so that economic interests do not override the people's claims, says João Paulo Rodrigues, from the MST, who participated in the hearing.

The Dossier Against the Poison Package was also delivered, which denounces PL 6,299/22, approved by the Chamber at the beginning of the year and which releases more pesticides in Brazilian food.