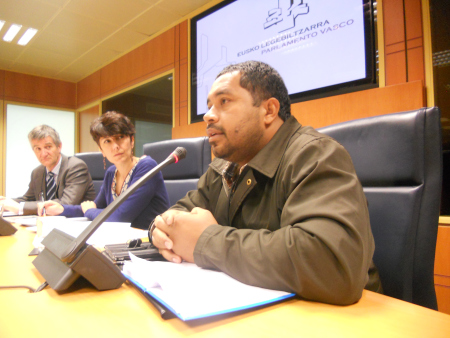 The year 2013 won’t be missed by the Landless throughout the country. Regarding the struggle for land, the balance is positive, due to the demonstrations, marches and occupations of land and public buildings that occurred almost throughout the year.

But when referring to Agrarian Reform policy, almost nothing has been done, and in many cases the government walked backwards. This is the assessment of João Paulo Rodrigues Chaves, from the national coordination of the MST, on the agrarian policy stimulated by the federal government during all of this year.

As Rodrigues stated, something that has always been bad in this government became even worse. “So far, only 159 families were settled around the country. It's a shame. There were 10 properties expropriated by the Dilma government. Worse than the last military government of General Figueiredo, when 152 properties were expropriated," he says.

How do you rate the struggle for land in 2013 in a period of complete paralysis of Agrarian Reform?

Despite being a completely negative year in relation to agrarian reform, the peasants remained steadfast in the struggle for land.

In March, for example, we set up a permanent camp in Brasilia for three months, struggling constantly in the federal capital, with marches, occupations of ministries and political acts.

In the same month, the journey of the women happened, when more than 10,000 farmers mobilized to demand the settlement of 150,000 families camped across the country; occupying land, agrochemical companies, public buildings, marching and blocking highways.

Immediately following, in the month of April, the Landless made ​​another journey of national character, with demonstrations in 19 states plus the Federal District. Again blocked dozens of highways, occupied more land, public buildings, city halls and held marches and political acts across the country.

In June and July the Movement joined the demonstrations that came out to the streets of major cities in the country and blocked several highways. In this wave, landless youth organized a campaign of struggle in the beginning of August. In the end of this month, the whole Movement held, along with the central trade unions, a national mobilization, with the central unions conducting strikes and work stoppages in the cities, while in the countryside we blocked the highways.

In October, more than 12 states mobilized around the Unitary Day for Food Sovereignty, when once again the rural population promoted marches, occupying land and public buildings. That same month, the quest of the Landless youth reoriented the fight in the countryside and the necessity for Agrarian Reform, occupying ministries and state departments.

All this just to talk about the struggles of national character, not counting regional struggles in the states. That is, to say that there is no more fighting in the countryside is a big lie.

And where does the question of land reform enter?

This is where the big problem comes with an extremely negative balance. This is the worst year of Agrarian Reform. The Rousseff administration, which has always been bad in this matter, got worse. So far, only 159 families were settled around the country. It's a shame.

Another serious problem is what the federal government is calling the “emancipation of settlements,” i.e. passing the title of the lots to the settlers. In practice, it serves to let the state take responsibility for the families. But the worst is that this policy will create a counter agrarian reform, since large farmers would then press the settlers to sell their lots, putting everything downhill and further increasing the concentration of land in the country.

And what is the cause of this difficulty in advancing Agrarian Reform?

The first is that the government is completely hostage to the Rural Caucus, the largest front in Congress. There are 162 deputies and 11 senators in the Rural Caucus, not counting the legion of last minute followers.

Just to have a dimension of the problem, no matter how absurd the agenda of this sector is, they manage to come out victorious in all proposals, even unconstitutional ones.

We can start with the stranglehold of the Forest Code [Ed. revised to permit increased exploitation of the forest), through the amendment of the PEC do Trabalho Escravo [Ed. Proposal to Amend the Constitution on Slave Labor -  a proposal to change the definition of what constitutes slave labor], backtracking on legislation concerning the demarcation of indigenous lands, the creation of a special commission to release new pesticides with greater ease - ignoring the assessment work  of ANVISA (Agência Nacional de Vigilância Sanitária – Brazilian National Health Surveillance Agency)  and IBAMA (Instituto Brasileiro do Meio Ambiente e dos Recursos Naturais Renováveis - Brazilian Institute of Environment and Renewable Natural Resources) - and the release of new transgenic crops .

None of these proposals are in the interest in Brazilian society. All are exclusively the particular interests of this sector and were victorious. The Rural Caucus is a cancer of the Brazilian people.

The other issue is the illusion of the government in relation to agribusiness. The major commodity exports promoted by this sector allow the government to maintain the policy of systematic generation of a primary surplus, ensuring the fate of budgetary resources to the financial sector, as interest payments and debt service, which is unfortunate.

But at the same time [the government] has created some public policies for family and peasant agriculture.

First it is very important to note that all policies are the achievements of the struggles of social movements. We strive for guaranteeing the purchase of food and we won the National School Feeding Programme (PNAE) and the Food Acquisition Program (PAA). We fight for education in the countryside and won the National Education Program in Agrarian Reform (Pronera).

We fight for the industrialization of our production, and we won the Programa Terra Forte [Ed. program to promote agroindustry (e.g. cheese and yogurt production on settlements with dairy cattle) in the agrarian reform settlements]. We fought for a different model of agriculture, and won the National Plan for Organic Production and Agroecology - Agroecology Brazil. There are but a few examples of this.

However, we have in mind that although these measures are important, they also have their limits. They are very disproportionate compared with the investments in agribusiness. To get an idea, the Harvest Plan 2013/2014 for family agriculture represents just over 20% of the budget for agribusiness.

Furthermore, we have those policies today, but nothing assures us that we can count on them tomorrow. A simple change of government, for example, may end all our achievements.

What do you need to do then?

The need is to prioritize peasant and family farming, and not treat them as an afterthought. The government must understand that the only solution to poverty is extensive land reform, creating thousands of jobs in the countryside. On the contrary, there remains only the swelling of major urban centers and the slums of the suburbs around these big cities.

That is, change the logic and structure of agricultural production in Brazil. The FAO (United Nation’s Food and Agricultural Organization) itself has recognized that the only way to end the environmental crisis and guaranty food sovereignty is in family farming. This was said by José Graziano, director of the FAO. This recognition of the need for family farming is so primary that 2014 will be designated the International Year of Family Farming by the UN.

But why can’t both models of agriculture be reconciled?

They are models that contrast in their logic and essence. The greed of agribusiness with its gigantic economic resources impedes another type of agriculture, and always seeks to incorporate the peasant land and natural resources into its model of commodity production.

To get an idea, in the last two decades more than 6 million people were evicted by agribusiness in the Brazilian countryside. And where did they go? To the slums of major urban centers. Agribusiness does not generate employment, since more than 70 % of the rural workforce is employed in family farming, and, further, it appropriates small and medium farms, increasing the concentration of land in Brazil year by year.

Within the production of staples of the Brazilian people, the situation is also very serious. From 1990 to 2011, the areas planted with staple foods like rice, beans, cassava and wheat declined between 20-35 %, while the elite’s agribusiness products, such as sugarcane and soybeans, have increased 122% and 107%. And all of these are export-oriented. We have to import rice and beans from China. This is alarming.

In February 2014, the MST will hold its 6th National Congress. What does the Movement intend with this activity?

We understand that the land reform is no longer just a national policy for the rural population. It is urgent and necessary to the whole of society as a whole.

If we want to eat food full of poison that will give us cancer, to cultivate a production that destroys the environment and contributes to the climate crisis, to expel the peasants from the countryside increasing the poor population of the big cities, then Agrarian Reform in fact not is required.

But if we want, on the other hand, a production model that reconciles production with environmental preservation, that provides the Brazilian people with healthy food without pesticides, that ends misery and poverty our country, then it was never so necessary.

Therefore, we have to show the importance agrarian reform to the whole society for the help of the working class achieving the People's Agrarian Reform, which is only possible with a comprehensive reform of the political system.

And what are the prospects for the struggle for the next period?

In this last period, we have built and expanded the unity of all rural social movements, with their eyes on a program of agriculture that really is in the interest of the Brazilian people. And that tends to more each time.

Alongside this, there is mounting evidence of the contradictions of the agribusiness model – the destruction of the environment, the massive use of pesticides and insecurity of food prices.

Furthermore, the result of the great struggles of this year, the social organizations built the Popular Referendum for deep political reform in 2014, which would dramatically change the current picture.