20,000 Landless block more than 50 highway points across the country

Demonstrations demand freedom for former president Lula, on the day of his possible arrest 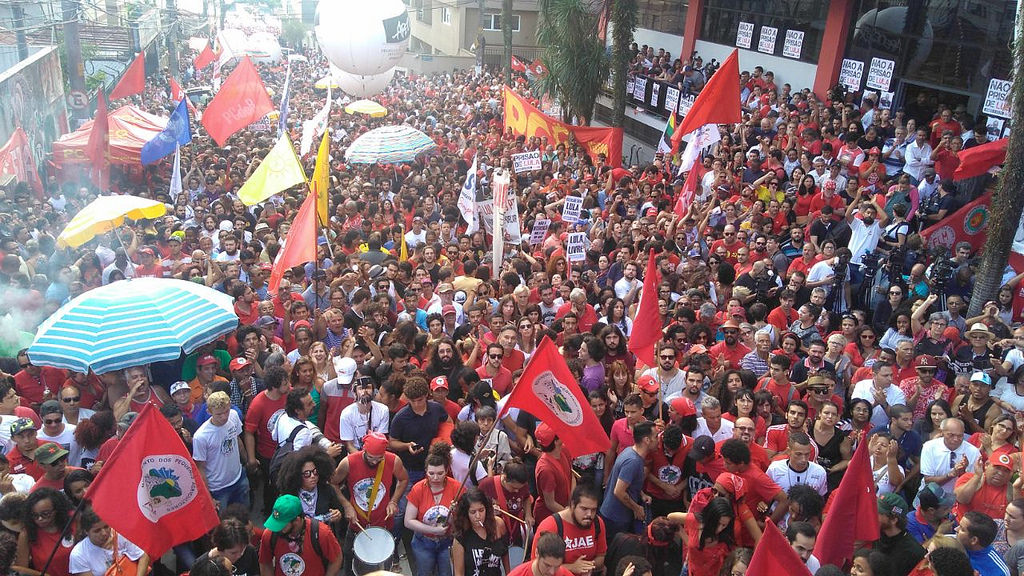 A democratic vigil of popular movements accompanies Lula at the Metalworkers' Union of ABC, in São Bernardo do Campo

Since the first hours of this Friday (April 06), more than 50 highway points have already been blocked throughout the country, either in the capitals or in the farthest corners of rural areas of the country, against compliance with the arrest warrant issued by the Judge Moro for former President Lula.

Eighteen states and the Federal District were mobilized with some 20,000 rural landless workers who, in addition to the state and federal highway points, blocked airport entrances, marched and now joined the acts in Brazilian capitals, reacting with indignation to the announcement of Lula's prison.

"We are in resistance against the arrest of President Lula. The political deliberation of the Brazil Popular Front and the People Without Fear fronts is this. We will not let Lula surrender, either in the city of São Paulo or in Curitiba," warns João Paulo Rodrigues, of the national leadership of the MST. 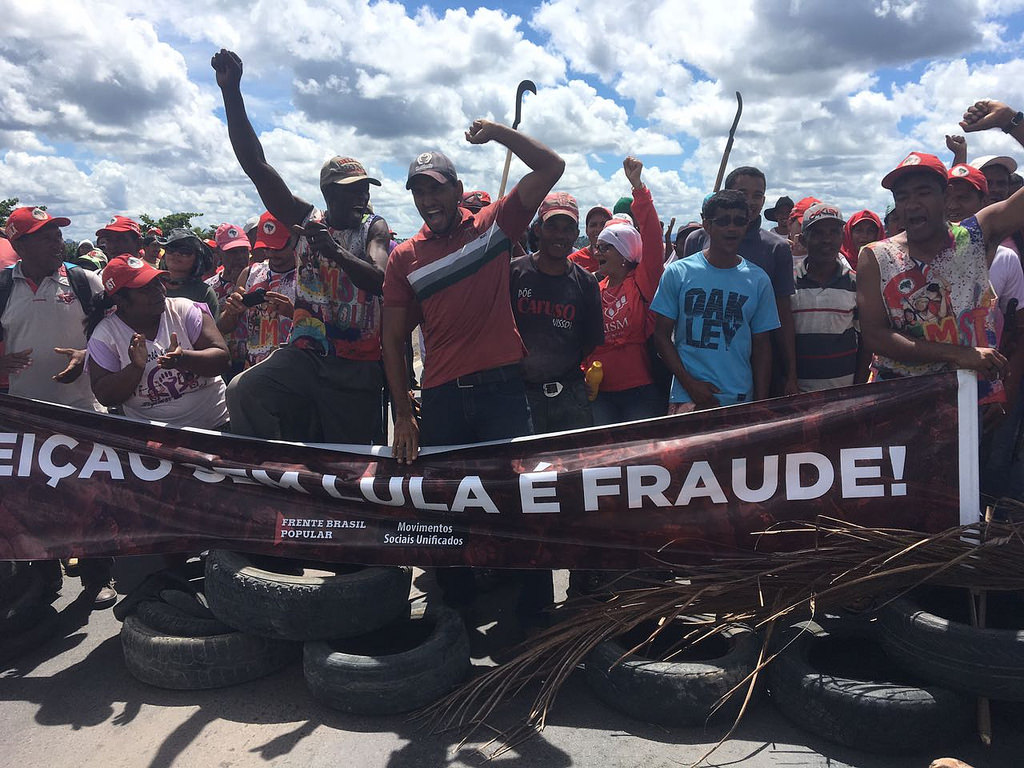 Blocking of the BR in Bahia. Photo: Disclosure MST

"We orient our militancy so that it can come to São Bernardo to resist, in addition to continuing to mobilize in all the states of the country," he concludes.

Major acts and marches are already taking place, particularly in the capitals and large urban centers, called by the Brazil Popular Front, to which the militants of the MST also join.
The population shows its indignation at Lula's arrest and burns tires in front of Diário de Santa Maria, in the heart of Rio Grande do Sul. The vehicle of communication belongs to the RBS group, Rede Globo, which, according to the peasants, is center in the conduct of the coup.

The prospect is one of democratic resistance and vigilance throughout the country. In addition to highway blockades, a crowd does not stop to reach the ABC Metalworkers' Union in São Bernardo do Campo. A democratic vigil of the popular movements accompanies Lula during the day in the union. The decision of the Front of People Without Fear and Brazil Popular Frontl is to resist and not let the police execute the arrest warrant.

Check below where the actions occurred.

In the south of the country, the mobilizations began early in the year with the occupation of highways 473, Falls of the Iguaçu Falls to São Jorge d'Oeste, in Paraná. In addition to BRs 158, between Rio Bonito do Iguaçu and Laranjeiras do Sul and PR 170, João Lunardelli, between Porecatu and Florestópolis. Altogether more than 3 thousand Landless were mobilized. 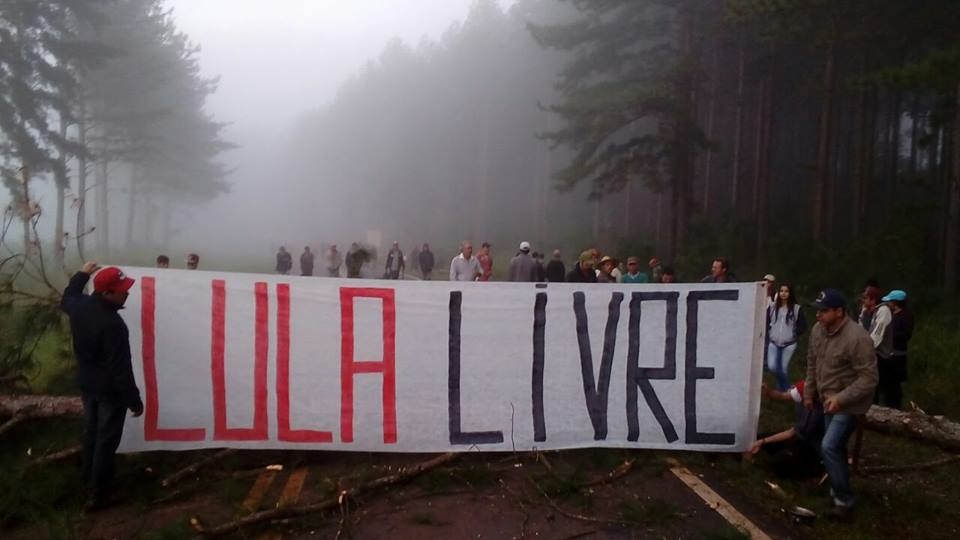 The headquarters of the Commercial Association of Maringá (ACIM) dawned with the phrase "Free Lula". Similar actions occurred throughout Brazil, as well as the blocking of highways. The acts are against the arrest of former President Lula, decreed late Thursday afternoon by the judge of first instance Sergio Moro.

In Santa Catarina, the BR 116 was locked at the time of São Cristóvão and in Xanxerê the Landless people carried out a march with about 800 workers.

In Rio Grande do Sul, Lula's supporters take the streets of Pelotas, in the southern region of the state, and the MST locks Trevo da Vila Operária, on BR-293, in Candiota, in the Campanha region.

In Minas Gerais, in the state capital, Belo Horizonte, the Sem Terra held siege at the home of Carmem Lúcia, minister of the Federal Supreme Court, along with other movements. In addition, BRs 381 (Fernão Dias) were closed, which gives São Paulo access to the capital of Mineira and 116 in Frei Inocêncio. 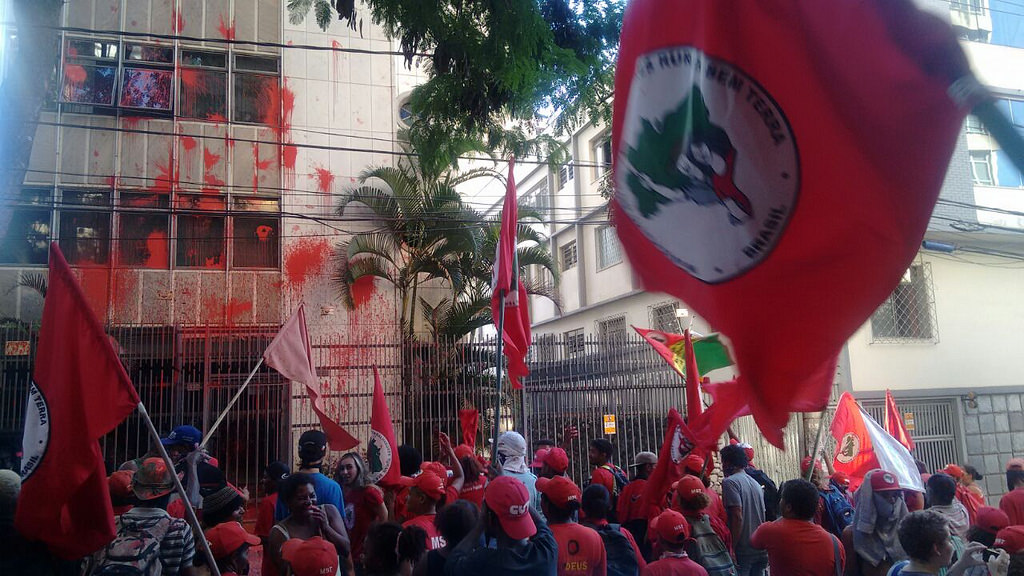 In DF. at the moment, about a thousand people gather in Zumbi dos Palmares Square in Brasília to defend Lula and protest against his arbitrary arrest. Already in Rondônia, about 200 families blocked the BR 364 that gives access to Porto Velho state capital. In Jaciara (MT), the Sem Terra blocked the BR 364 against the arrest of former president Lula.

In the northeast region, only in Bahia, were blocked 12 points of 7 highways mobilizing about 6 thousand Landless. : 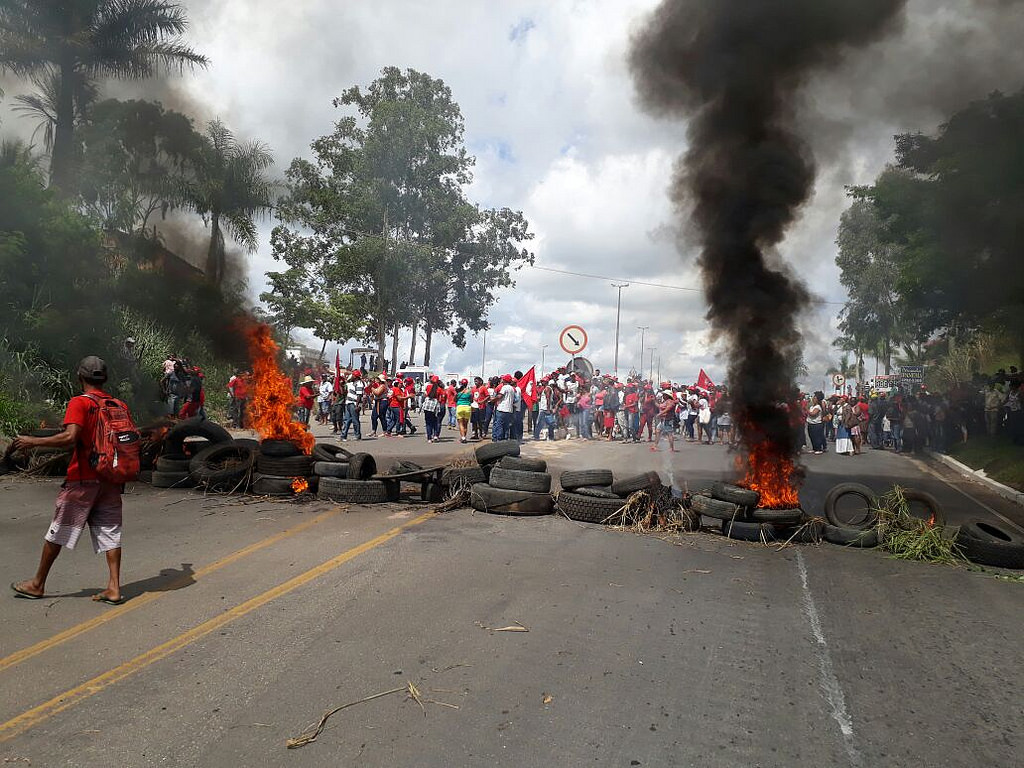 Blocking of BA 367, at the southern end of Bahia. Photo: Disclosure MST

The BR 101 was blocked in six points, at km 832 in Itamaraju, Eunápolis, in the Trevo de Teixeira de Freitas and at km 763 in Itabela, all municipalities in the extreme south of the state. Up the region, the same BR was stopped in Arataca and Ibirapitanga.

Still in the extreme south of Bahia, the BAs were 290, in Alcobaça and 367, in Eunápolis direction Porto Seguro, and the BA 330, in Jitaúna in the region south of the state. Also were blocked the BRs 235, in Casa Nova, 116, in Paulo Afonso and 001, in Costa do Dendê - Nilo Peçanha.

The Landless also occupied the entrance of Salvador Airport and participates in the actions organized by the Frente Brasil Popular in the state capital.

In Pernambuco, about 6,000 landless were mobilized at the blocking points of Brs 101 north in Goianá and in the south of the state in Escada. In Moreno, metropolitan region, BR 232 and 428 were closed in Santa Maria da Boa Vista in the São Francisco hinterland and in Timbaúba the BR 480.

State highway 085 was also closed in Amaraji in the Mata Sul region, PE 050 between Glória do Goitá in Mata Norte and Vitória de Santo Antão metropolitan region, and 316 in Petrolândia Sertão de Itaparica. 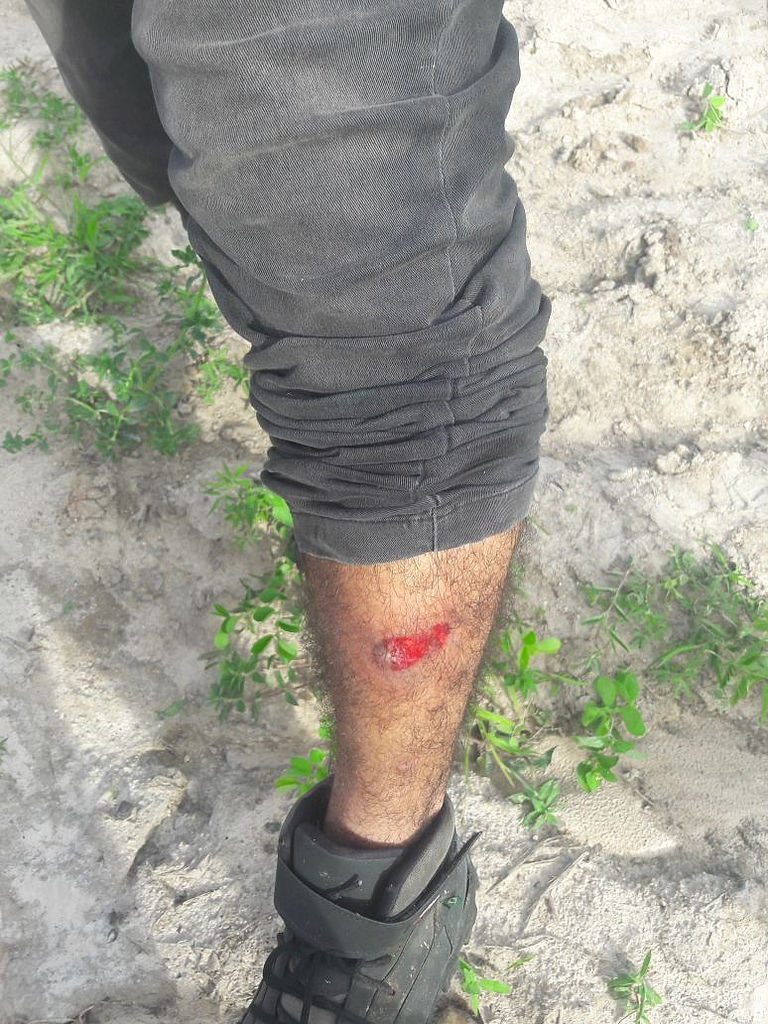 In Ceará, Landless suffered an attack by the Military Police during the blockade of the highway BR 122 (Estrada do Algodão) where the Antonio Conselheiro settlement is located, 07 people were injured. In the truculent action they threatened to invade the State School Francisca Pinto, that is located inside the settlement.

The Landless also blocked BR 020, in the municipality of Boa Viagem, in Madalena, they marched with families settled and encamped in the municipalities of Quixeramobim, Madalena and Canindé. Alongside other popular organizations have barricaded and the state highway that connects Caucaia to the district of Capuan.

In Tamboril, there was also a march through the center of the city, and in Crateús, the popular movements already begin the concentration in the place of the Lollipops, in front of the monument Prestes Comuna.

In Paraíba, Landless suffered an attempted murder by the right blockade of BR 101. A man not yet identified pierced the blockade and shot with gun against Lindinalva Pereira de Lima  Filha. The landless worker had to be sent to the hospital.

The BR 230, between João Pessoa and Campina Grande, was also closed and in Pedra do Fogo to PB 250. In all about 750 Landless were mobilized.

In Piauí, the BR 360 was locked. In Sergipe, the action took place in three points, one at BR 280 in Itaporanga, the other at Avenida Barão de Maruin, state capital, Aracaju, and finally, the bridge on the border between Sergipe and Alagoas. In Alagoas, besides locking BRs 316, in Atalaia, 101 in Teotônio Vilela and 104 in União dos Palmares, the Landless also blocked AL 220, in the Agreste.

The Brazil Popular Front and People Without Fear also blocked the access routes to TV Gazeta, an affiliate of Rede Globo in Alagoas, in the defense of Lula and democracy.

Following the fight in defense of Lula and democracy, in Rio Grande do Norte the MST locked the BR 406, which gives access to the International Airport Augusto Severo

In this broad process of mobilization, the northern region was mobilized in Pará with the locking of BR 155 in Marabá. In Santa Luzia do Pará, Sem Terra, trade unionists, teachers and students gather in front of the headquarters of the STTR (Rural Workers Union) and carry out a political and cultural act in support of former President Lula.

In Maranhão, in the capital of São Luís, there was an act that gathered around 1500 people and closed avenues and bridge the city. In the interior state BRs were closed in Igarapé do Meio to 222, in Acailandia to 010 and in Pindaré Mirim an act reunited encamped of the MST.