100 years of Florestan Fernandes, a theoretician who served the working class

The sociologist who took his class origins to the books and study, saw revolution as essential for the transformation of Brazil 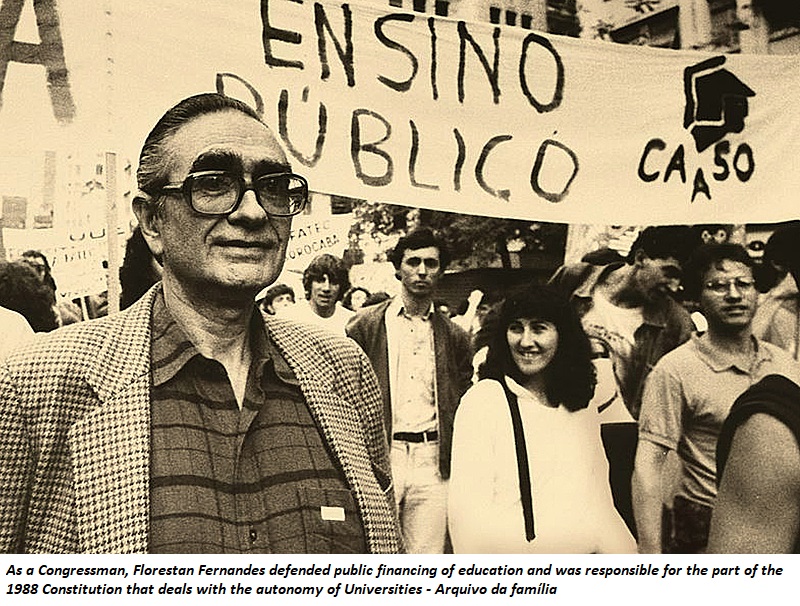 When he completed his Social Sciences degree at the University of São Paulo (USP), in 1944, Florestan Fernandes didn’t graduate as a sociologist shaped merely by books. Sociology actually first came to him through work, and only later through reflection. This is an idea of the sociologist himself, and what permeates the complexity and totality of his thoughts.

Florestan was the only child of Maria Fernandes, a young Portuguese woman who arrived in Brazil to work the fields at age 13. She gave birth to him on July 22 of 1920. Florestan first witnessed class conflicts while at the Bresser (a wealthy Brazilian family) estate, where his mother worked as a maid.

“He couldn’t use his own name,” says Florestan Fernandes Júnior, son of the journalist and sociologist. Florestan, the name of a character in Ludwig van Beethoven’s opera, Fidelio, wasn’t appropriate for the son of a domestic worker and thus, he was called Vicente, which was considered more fitting.

The last straw at the Bresser home – which in later years he considered as essential from a sociological point of view – occurred when the bosses asked Maria Fernandes to hand Florestan over to them. She replied to them, “only dogs are given away,” and packed up her things and went to live in a poor neighborhood.

Faced with this situation, at age six, Florestan started working as a shoe shiner to help his small family survive. It was only at the age of 17, after many different jobs, that Florestan took up studying again. He did a course to complete what is now known as high school and was accepted at the University of São Paulo.

For Miguel Yoshida, editor of Expressão Popular, understanding Florestan’s class origins is fundamental to understanding his theoretical development. According to Yoshida, the themes he theorized about are proof of this: they are largely issues related to class and race.

The dependent bourgeoisie and revolutionary practice

Florestan Fernandes thought that putting theory into practice was a political task, the objective being providing the working class with the necessary tools to transform its own reality.

The first step in the construction of this revolutionary practice was understanding the origins of social classes in Brazil since the times of slavery. The sociologist identifies a continuity in the patterns of class domination, through the cultivation of slave like inheritances reflected in the social dynamics of the country.

In Florestan’s perspective, the Brazilian bourgeoisie did not need a revolution to cement the capitalist means of production. Here, capitalism, imperialist and slave owner dynamics meshed together and gave rise to what he calls capitalism of dependence.

This dependence forces the Brazilian bourgeoisie to make concessions to the central capitalist structure abroad to maintain its status, understanding that these two are “not on equal footing.” This can be observed today with the dismantling of Brazilian industry and its condition as an exporter of commodities.

In this sense, the political aims of the Brazilian bourgeoisie will never lend support to the transformations required for the country to develop, such as land and education reform. On the contrary, while it is being submissive to the central capitalist structure, it submits the working class to violence, in the same manner slave owners did.

Education for workers’ self emancipation

Florestan was intensely concerned with the topic of education and defended high quality, free, secular education – not only for technical learning, but also as an instrument of social transformation.

In the last decade of his life, while he was a Congressman for the Workers Party (1987-1995), Florestan helped lay the foundation for the Maintenance and Development of Basic Education Fund (Fundeb), as well as the Constitutional principles surrounding Brazilian education in the National Congress.

His engagement in the process of social transformation meant that Florestan never really ever cast aside politics. Even within the universities he practiced a critical and militant type of sociology.

In 1969, during Brazil’s military dictatorship, he paid the price of being forcibly retired, with the enactment of the AI-5 law (an attack on all free thought). It was then, that Florestan decided to go into exile in the United States and Canada, where he taught at the University of Toronto.

Florestan returned to Brazil in 1972, but was only able to go back to teaching in 1978, when Dom Paulo Evaristo Arns, third Regent of the Pontifical Catholic University of São Paulo, reinstated him, even with pressure from the military for him not to do so. Some time later, he turned definitively to party politics within the Workers Party (PT).

Another mission the sociologist was determined to accomplish, was the creation of a unified democratic front by all Leftist parties that would stand up to authoritarianism. He used to say that a large section of progressives believed that they had defeated Nazism and fascism when Adolf Hitler and Benito Mussolini fell.

Florestan would claim that they were wrong. “Fascism never died. He used to say that fascism is the enforcement arm of capitalism. Whenever capitalism is under threat, it shows up. This is what we are seeing today in Brazil and many other countries,” explains Florestan Fernandes Júnior.

Currently, Florestan Fernandes remains alive through the Florestan Fernandes National School (ENFF), located in Guararema, São Paulo, founded by the Landless Workers Movement (MST). “A space built by the working class, brick by brick, to make political education possible for social movements from all over the world,” the organization tells us.