The continuity of the coup government of Michel Temer and of his parliamentarians in the Congress is one of the negatives points of this year. 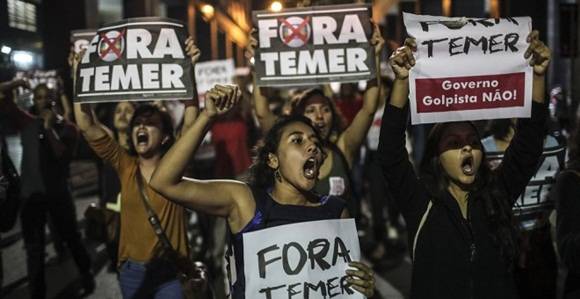 The question that prevails is: What to expect of 2018?

Every new year there is a balance of the advances and setbacks in the life of the people. But in this 2017, filled with memorable events, it is difficult to chose.

With this in mind, I suggest that you do a list of your own! Read mine, the order is completely random:

10 – Paralysis of  agrarian reform and of the public policies for family and peasant agriculture, with the closure of the Agrarian Development Ministry, the dismantling of the National Institute of Colonization and Agrarian Reform (INCRA), means there will be more transgenic and agrotoxic seeds that will poison our foods. To finish this point, the project aims to sell our lands to foreign capital.

9 – The non-application of sanctions to the companies Vale SA and BHP Billiton, for the Mariana (MG) crimes. These companies killed 21 people, razed a river of 700 kilometers, the Doce River, and harmed the lives of thousands of people in the states of Minas Gerais and Espírito Santo. Up until today, they still haven’t compensated or repaired the damage they did to the people, and they still want to expand mining activities in the region.

8 – The manipulations and heavy-handedness of Dallagnol and Sergio Moro, who have disgraced the Constitution and insist in the impossibility of Lula’s candidacy without having any evidence on the case. On the other hand, the fact that Aécio Neves, Senator Zeze Perella, José Serra, Ricardo Teixeira, Eike Batista and the banker Daniel Dantas remain free despite the clear evidence that proves their corruption.

7 – The delivery to the private and foreign capital of our natural resources, as the preá-sal [off-shore oil deposits], minerals, water; which should be used for the common good of the Brazilian people.

6 – The approval in Congress to limit the social investments in Health and Education. But at the same time, the increasing the interest spending to more than 400 billion reais of the national budget which will go to bankers.

5 – The manipulative practices of O’Globo, always deceiving and lying to the people. But now its evident agreement of support towards the coup government of Michel Temer has been exposed.

4 – The so called “labor reform,” which took historical rights from 140 millions Brazilian workers, while keeping 20 million unemployed and 22 million in precarious work and without any right to retirement.

3 – The partial and partisan behaviour of the members of the Supreme Court (STF), specially in the case of Mr. Gilmar Mendes, always acting in favour of the interests of the big bourgeoisie.

2 – The bigger picture of the social inequality that appeared in the revelation that only 6 capitalists earn more than 102 million Brazilians. And, that 25% of Brazilians don’t have any monthly income.

1- The continuity of the coup government of Michel Temer and of his parliamentarians in the Congress.

Now that we have had a glimpse of what happened in 2017, the question that prevails is: What to expect of 2018?

The mobilization of the people, which has to struggle and rise in the defense of its rights and of the interests of the whole nation. For us to have free, democratic elections with the participation of Luiz Inacio Lula da Silva.

I send you my most warm greetings, and we will meet there, “in the streets, in the country and in the constructions sites,” as poet Vinicius de Moraes used to say.