“Recognition for the MST comes at a historic moment”

Check out the speech by Marina dos Santos, from the Movement's National Directorate, who represented the MST in the international category of the "Acampa - Pola Paz e Dereito a Refuxio" Award 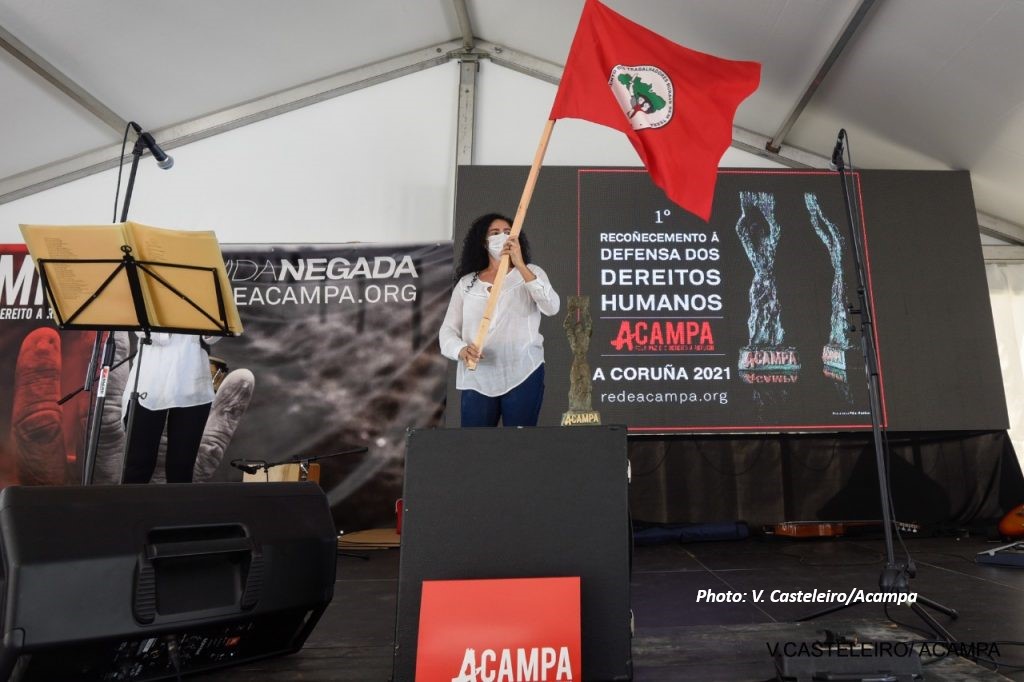 Last Saturday (11), the MST received in the province of Corunha, northwest Spain, the “Acampa – Pola Paz e Dereito a Refuxio” award. The movement was recognized by the popular jury in the international category of the prize for its work in defense of human rights.

This is recognition for the work in defense of the working class of the countryside and the city. Representing the MST in the international category, Marina dos Santos, from the Movement’s national leadership, spoke about the reflections that the Movement brings as an alternative and hope, fighting the development model adopted by the capitalist system.

Check out the full speech:

“This recognition of the MST comes at a very important historical moment for humanity.

In Brazil, and in many other places around the world, peoples are suffering from the consequences of the economic, social, political and ecological crisis. It is a time of increasing conservative thinking and setbacks in the rights of the working class, of the policy of Agrarian Reform.

The agro, hydro and mineral businesses are appropriating and plundering more and more the goods of nature, such as land, water, ores, forests, seeds, and biodiversity, to transform them only into profit.

Therefore, this international recognition of the defence of human rights granted to the MST moves us, magnifies us, and fills us with joy and hope!

This recognition goes to all the families who fought and struggle, who ensured active resistance, who acted in defense of life and to save the lives of workers from the countryside and the city; To the two million people who today are part of our base throughout Brazil.

This recognition goes to every woman, man, youth and child who, under black plastic tarpaulins or on the land conquered in their settlement, produce healthy food, free of pesticides; who adopt agroforestry and food sovereignty.

It goes to everyone in the Campaign to plant 100 million trees over the next 10 years in all regions of the country.

It goes out to all the people who build our relationships free of machismo, racism and homophobia.

This international recognition of the defense of human rights goes to all those who call themselves landless, friends who defend us from the chains of the judiciary, the jagunçagem, the police and all the violence caused by the current genocidal government.

It goes to all the indigenous peoples who are in struggle and resistance in Brazil – no to the Temporal Framework! as well as to all peasants, especially those organized by Via Campesina International.

It goes to all the people who build unity, resistance, solidarity and struggles for the rights of the working class of the countryside and the city.

Bishop Dom Pedro Casaldáliga, a Spaniard who dedicated his life to Agrarian Reform in São Félix do Araguaia, in the northern region of Brazil, used to say: “Damn all the fences that prevent men and women from living and loving.

For this reason, on behalf of the MST, I commit myself and call on you to continue organizing the people, to fight for land and for Popular Agrarian Reform, for all the rights of the working class, until nature and all people can live and love.