“Out, Bolsonaro!” and The Cry of the Excluded mobilize 200 cities against hunger

Food donations and repudiation of coup threats marked acts that brought together 300,000 people in Brazil 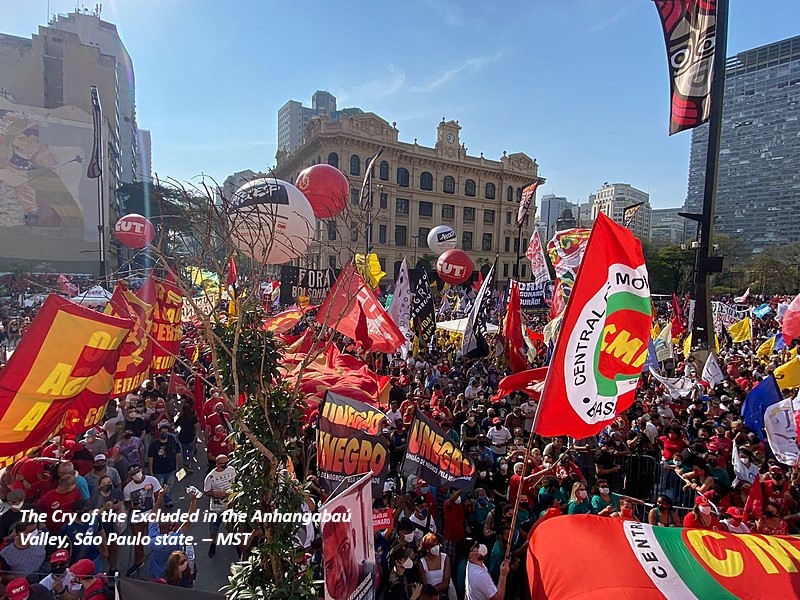 On September 7, protests against the government of Jair Bolsonaro (non-party) joined the well-known movement The Cry of the Excluded, which, for 27 years, has been a popular counterpoint to the official celebrations of Brazil’s Independence Day. This time, the motto was "Life in the First Place".

More than 300.000 people protested in about 200 cities in national and foreign territory, according to an estimate by the National Campaign Out, Bolsonaro, an association of more than 80 entities that have been calling for demonstrations since May this year.

"The streets are now divided between those who defend democracy and food and those who defend dictatorship and rifle. Our cry will continue defending the people," said Josué Rocha, coordinator of the Out, Bolsonaro Campaign.

In dozens of cities, the protests had also actions of solidarity, with the collection and donation of tons of food to the population most affected by hunger.

In addition to demanding immediate solutions for one of the worst moments of Brazil's economic and social crisis, the protesters repudiated the coup threats made by Bolsonaro, who has been calling for military intervention against the Judicial and Legislative powers.

“With no doubt, we had the biggest Cry of the Excluded in these 27 years of existence, but the important thing was to carry out this act facing every fascist discourse and every narrative of fear built by the coupists,” Rocha said.

In the capital city of São Paulo state, the act collected 15 tons of non-perishable food aimed at needy families.

Guilherme Boulos (PSOL Party), the coordinator of the People Without Fear Front and of the Homeless Workers Movement (MTST, in Portuguese) got on a car with sound system and spoke to around 50.000 people in the Anhangabaú Valley, downtown São Paulo. 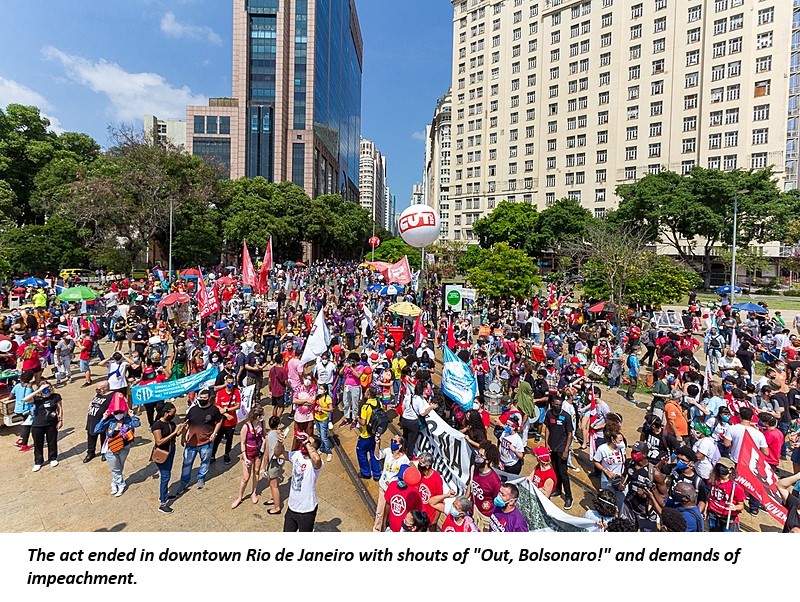 In Rio de Janeiro, the act brought together more than 30.000 people in the city’s downtown, according to an estimate by the Popular Brazil Front and the People Without Fear Front. Organizers say this is the largest number of participants in the history of the Cry of the Excluded in Rio.

"Youth are making up the 27th Cry of the Excluded because the Brazilian people can no longer stand this genocidal government that kills by bullets, hunger, and [covid-19] virus," said Maíra Marinho, national coordinator of "Levante Popular da Juventude (Brazil's Popular Youth Movement) in Rio.

The Movement of Small Farmers donated agro-ecological food to 28 families as part of the Joint Effort Against Hunger in Vila Projetada, Niterói.

The distribution of basic-need grocery packages had a moment of conversation about "What does Brazil need to be independent?". At the event, participants received a special edition of the newspaper Brasil de Fato approaching “Hunger, unemployment, corruption and more than 570.000 dead”. 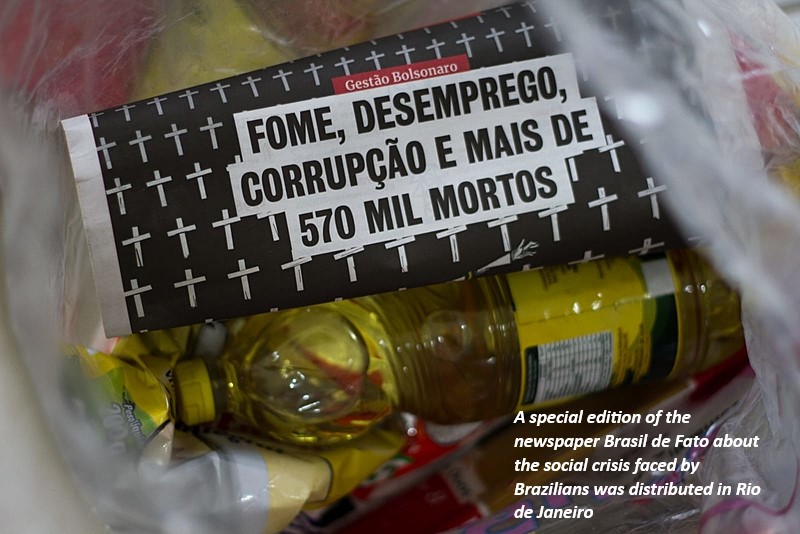 Curitiba and its surroundings

With the motto “In the struggle for popular participation, health, food, housing, work, and income, now!”, the Cry of the Excluded in Paraná took place in the Nova Esperança community, Campo Magro municipality, in the Curitiba metropolitan region.

The location chosen was symbolic. About 1.2 thousand families have been living in the occupation since May 2020. It is in a public area in Paraná state, which has been abandoned for over 12 years.

"Fighting for housing is symptomatic in a country that is so unequal in terms of land division, and that needs Agrarian and Urban Reform", highlighted councilor Renato Freitas (Workers' Party), who represents movements on Curitiba outskirts. 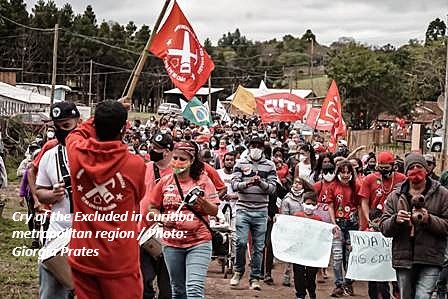 In Brazil's capital city, the protest gathered thousands of people in the TV Tower, downtown Brasília. According to the organizers, the act was attended by about 5.000 people. Distrito Federal’s Military Police does not estimate the public.

The act was marked by the diversity of social representations and workers, having public servants, family farmers, indigenous people, the LBGTQIA+ population, women's movement, the black movement, and students.

In the capital city of Minas Gerais state, the act to end the Bolsonaro government began at around 9 am in Afonso Arinos Square, downtown. Demanding "vaccine, bread, work and education", the protest went to Praça da Estação, where it was closed.

In Florianópolis (Santa Catarina state), the rain did not stop the demonstrators from showing up. The act started at Largo da Alfândega, downtown, which was full of people. Shouting "Out, Bolsonaro!", the march traveled through the central area of the city.

In Fortaleza (Ceará state), the meeting place was at Cruz Grande Square, in the Serrinha neighborhood. During the preparation, religious leaders performed an ecumenical act. According to the organizers, 10.000 people attended the demonstration.

The Ceará countryside the Cry of the Excluded demonstrations. Among the municipalities mobilized were Crato, Crateús, Canindé, Tamboril, Itapipoca, and Caiucaia, having representatives of social pastorals, popular movements, unions, and political parties.

In Recife, the organizers registered 15.000 people, including parliamentarians from the progressive political spectrum, in addition to the participation of unions and movement leaders.

In Petrolina, Pernambuco state hinterland, the keynote of the Cry of the Excluded were the acts of solidarity.

Instead of marching on downtown, the organizations and entities turned their strength to holding a breakfast and artistic and cultural activities in João de Deus, a peripheral neighborhood in the northern part of the city.

In the city of Picos, inner Piauí state, an ecumenical act marked the donation of more than 8.5 tons of food from peasant agriculture aimed at families in 16 of the city’s neighborhoods.

In Londrina, Paraná state, families from the Eli Vive Settlement donated more than 3 tons of food during the Cry of the Excluded.

In Santa Maria da Vitória (Bahia), a meeting of unions, social pastorals, student organizations, and social movements ended with the launching of a joint campaign against hunger, with food collection.

In Campo Magro, Curitiba metropolitan region, a community bakery was inaugurated in the occupation located at Nova Esperança community, which promises to strengthen food production and generate income for the population.

In Brasília, healthy food produced by the Agrarian Reform territories was donated.