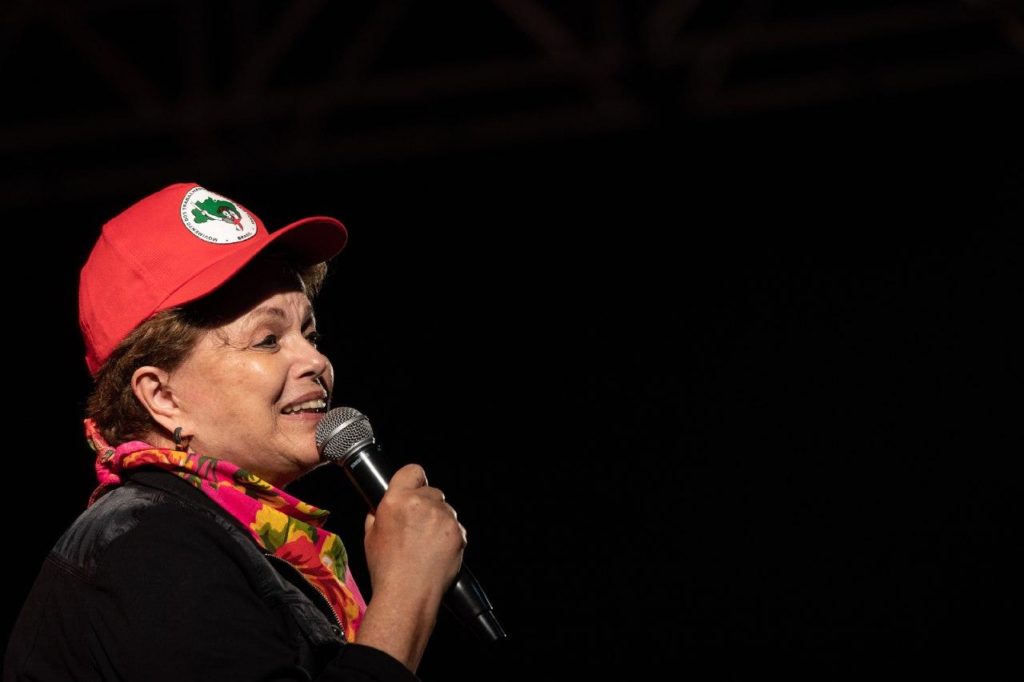 The former President participated in the political event of the First National Meeting of Landless Women in Brasília on March 7.

The First National Meeting of Landless Women held a Political and Cultural Evening attended by more than 40 national and international organizations, parties and social movements. In the audience of the Parque da Cidade Exhibition Center, in Brasília, more than 3,500 women from MST settlements and encampments, from 24 Brazilian states. On the stage, former president of the republic Dilma Rousseff, president of the Workers Party, Gleisi Hoffmann, attorney Deborah Duprat, member of the National Council of Christian Churches of Brazil (CONIC) Romi Bencke, and another ten guests.

Dilma Rousseff classified the current moment in the history of Brazil as very difficult, with a “neofascist authoritarian escalation”. The former president also stressed concern about the neoliberal aspect of the current government, which removes rights, attacks our large public companies and national sovereignty, criminalizes social movements, hands over the Amazon and moves forward to exploit its mineral resources.

“We have to be clear that neo-liberalism and neo-fascism are Siamese twins. This is the most perverse character of this authoritarianism that affects us all”, she said. Dilma emphasized the need for unity to face this situation. "If we do not unite and strengthen, we will not be able to contain the advance of fascism," she said.

For Dilma, the fascist character of the Bolsonaro government puts Brazil in a position of subordination to Donald Trump's interests. “We cannot let our country submit to imperialism, we are too big to be someone's backyard. We are too big and with people who are too strong to be submissive”.

The struggle in the streets is the necessary path for resistance, she stated. “We always have to start over again, there is no desperation in starting over again […]. We will realize that we only have one way out, which is to fight the monster of neo-fascism and neoliberalism together. We are women, let us fight as women have always fought, very hard”, concluded the ex-president.

Maria de Jesus, a member of the national leadership of the MST, drew applause by reaffirming the position of resistance of the landless women: “One of the first things we learned in the movement is not to bow your head, neither for machismo nor for patriarchy, nor for capital. We women will resist in all territories in the defense and construction of the unity of the working class, the countryside and the city”. For this leader, unity is the way out of all the setbacks that the country is going through.

The Workers Party president and federal deputy for Paraná, Gleisi Hoffmann, emphasized her gratitude to the MST for participating in the struggle for the freedom of former President Luiz Inácio Lula da Silva: “You were always there. You were firm and strong”.

The Workers Party reaffirmed its position in the struggle for equality. “The feminist struggle is not just a struggle for women, but for all those who are discriminated against in society. Feminists fight for the freedom of those who have no freedom”. For Hoffmann, Brazil is going through a perverse situation: "We have never needed social movements and left-wing parties so much," she said.

“I arrived wearing all black and I'm leaving in color,” joked Deborah Duprat, federal attorney for citizen's rights. “I am sure that the revolution will come from the hands of women. Now, what women are we? We are very many, we are diverse. I don’t know when this revolution is going to happen, I know that we are angry and we don't hide behind a cell phone sending hate messages, we get together and march," stated the lawyer.

“I see Dandara and Marielle in you. I also see on your faces the presence of Oxum, Iansã, Iemanjá and our ancestral mothers,” said Makota Celinha, general coordinator of the National Center for Africanness and Afro-Brazilian Resistance (CENARAB).

For the religious leader, Brazil is going through a period of extreme violence. “Like millions of Black mothers in this country, I don't sleep until my son gets home […]. Black life, for fascists, is worth nothing. We, Black women, are daily cut down without mercy ”.

The answer to this situation of oppression, for Makota Celinha, is resistance and confrontation: “Like you, I am also of the struggle, I am also of the war […]. Like you landless women, we carry resistance in our surname. Fascists are not going to kill us. We are single-minded and together we will make the revolution in this country. You, landless women, me, black woman, we will all continue to build a future with the possibility of a full and dignified life for all,” she concluded.

Lutheran pastor Romi Bencke, general secretary of the National Council of Christian Churches of Brazil (CONIC), estimates that the National Meeting of Landless Women goes beyond rural women. It is a meeting that brings together the entire journey of women who fight and fought for rights. “This is the meeting of the women's uprising in a context in which Brazil takes on, shamelessly, all its hatred of women, when we have a President of the Republic who is not ashamed of his misogyny. This meeting says that we women do not accept the fundamentalist patriarchy that steals the Christian faith to justify the oppression and exclusion of women”.