“I do not sleep without a gun,” says Secretary of Land Affairs

Responsible for land reform, Nabhan Garcia defends weapons in the field, promises to close MST schools and says he will not negotiate with the movement. 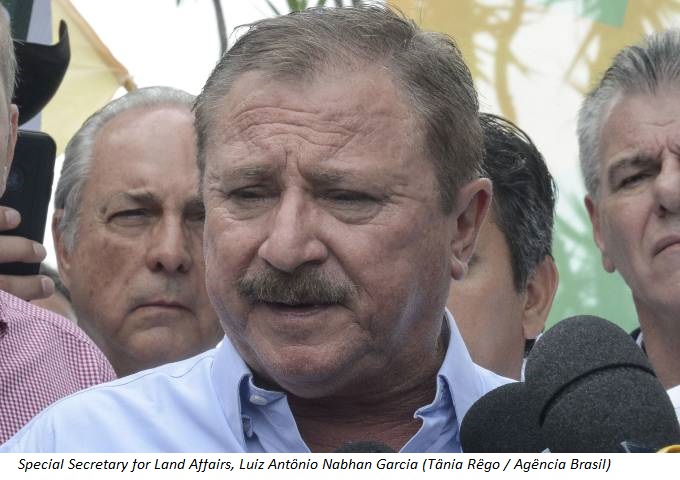 President of the Rural Democratic Union (UDR), Luiz Antônio Nabhan Garcia, 60 years old, hoped to be Minister of Agriculture, but was appointed by the president Jair Bolsonaro as Special Secretary for Land Affairs, a second rank. On Monday, January 14th, he received VEJA for an hour and a half in his office, in the Esplanada dos Ministérios, in Brasilia. In the conversation, he defended the new arms possession decree, said he would not agree to negotiate with the Landless Rural Workers Movement, which he called a criminal organization, and even promised to close the MST schools: "They are dictators' factories." Introducing himself as "minister Nabhan," he also said he intends to review the demarcation of the Raposa Serra do Sol indigenous reserve in Roraima. Here are the main excerpts from the interview:

Can the weapons decree increase violence in the countryside? On the contrary. Am I going to go into someone's house to commit a crime knowing that she is armed? Only if I'm stupid. In my house I do not sleep without a gun. From the moment the assailant is legally shot down in an act of legitimate defense, the other thugs will think twice before taking action.

How many guns do you have? I have the weapons that the law allows me to have. Do you think I'm naive enough to make public how many? Once, the Federal Police invaded my farm, used fifteen vehicles and found four, five guns inside. Then he returned everything to me, because they were all duly registered.

Do you hold the idea that the farmer will respond with bullets to land invasions? Every citizen knows what he has to do. The law called for immediate removal. It is my right to react when I am at home with my family and realize that my property and my own physical integrity are under threat.

Do not you, then, condemn the reactionary farmer? You reporters are mostly biased. You go there and say a sentence: 'The Minister of the Department of Land Affairs defends that the farmer walks armed and sends bullets.' This issue of defending property with immediate release is very personal. People need to be very careful not to become the target of a frame because they (the landless) are doctors on the subject.

What kind of frame? Sometimes the farmer, on the verge of being killed, seeing a murdered child or having his property burned, goes there and kills a landless. What happened the other day? The guy who died has become a martyr, and the one who shot became the villain, has become a defendant, took thirty years in prison. It's all reversed.

How do you intend to address the invasion of land? We must change the Penal Code and the Civil Code, so that the penalty is much greater. It is not possible for a man to invade a property, to do what he does, and not even to be arrested. It is necessary to aggravate the punishment for the so-called possession boon (the act of invading a land with violence or serious threat) and to punish with rigor the private imprisonment of owner, the destruction of property, fires, etc. I want to discuss this with Congress. I cannot get there and say, "I want twenty years in jail."

Over the past three decades, more than 350,000 families have settled. Will all these processes be reviewed? Of course they will be reviewed. The subject who is producing will have the deed of property, receive a serious financing policy, and rely on the government's hand in favor of it. Those who did not produce, did not report and maintain an idle farm will lose the lot. How much do you think a settlement costs from start to finish? A fortune.
The motto of the landless is to occupy, resist and produce. Resist is bullshit. It is Bolivarian thing. They're just fucking.

What is your opinion about the 2,000 MST schools? It is not possible for Brazil to admit, in the midst of the twenty-first century, dictatorships. You cannot admit schools of Marxists, Leninists, Bolivarians, who teach children to invade and commit crimes. Let's close schools and punish those responsible for indoctrination. Incidentally, this has to be qualified as a crime. Crime of homeland.

João Pedro Stédile, leader of the MST, called the Bolsonaro government a 'neo-fascist'. Stédile should be keeping Lula company in a prison. He was part of a government that was defeated in the most democratic way possible by the people. It is part of a government that has led Brazil to 14 million unemployed. A man who talks about making a red revolution, with an army of thugs, under the law, has no moral qualification to speak of anyone.

Are not you going to talk to the MST? This is the message I received from the President of the Republic: I will be in serious trouble if I receive the legacies of the MST law, which have no legal personality. The MST has no CNPJ [Ed. Cadastro Nacional da Pessoa Jurídica or National Registry of Legal Entities]. Where they took courses, in Cuba, in Nicaragua, with the FARC (Revolutionary Armed Forces of Colombia), they taught that the right thing is to stay in hiding. Have you ever seen a criminal organization in legitimacy? Does the PCC (First Command of the Capital – a drug gang) have CNPJ? Does the Red Command have CNPJ?

Are you not clinging to a formal aspect, the CNPJ, to turn your back on a movement combated by the UDR? The UDR has nothing to do with this story. The UDR is a legitimate entity, which has always advocated for the right to property, and has never been prosecuted for aggression. How can I dialogue with Zé Rainha, who is sentenced to 32 years in jail for countless crimes? How can I dialogue with Stédile, a guy who threatened to put his red army in the streets to defend Dilma, to defend Lula?

How will the secretariat treat indigenous and quilombola peoples? Technically, within the law. Nothing else will be done at the base of the cushion, the pressure, the threat. For example: these indigenous properties that are in the administrative sphere or even in the judicial sphere without res judicata will all be reviewed. You know that it is full of false anthropological report, that there are actions of NGOs with obscure interests, that there are clandestine economic activities in several indigenous areas.

Does the government intend to review the demarcation of the Raposa Serra do Sol indigenous reserve in Roraima? We are studying the possibility of reverting within legal parameters. On Thursday, I'm going to Roraima. The situation in the state is catastrophic: 46% of the territory is demarcated indigenous lands, 26% are national parks and 80% of the remaining areas are of environmental preservation. There is a modernity freeze in Roraima that is almost stationary, has no raw material, no ox.

Based on what law can the government revoke the demarcation of Raposa Serra do Sol? It is a situation that is being studied to see where there were failures, errors and procedures that deviate from the legal principles. If I pass a scripture for you and you discover fifty years from now that this writing was false, that the signature was false, that the award was false, that it is subject to revision. For this, we will have to make a serious survey. There are many situations in which ideological studies, tendentious studies have been done. The whole land process will be reviewed in a transparent, impartial and impartial manner.

Does the government intend to interfere in the link between sectors of the Church and movements fighting for agrarian reform? The government does not even have to get involved in this relationship. Now it cannot accept that an organization like the Pastoral Land Commission, linked to the Catholic Church, gives orders in a ministry, as it did before. If Pastoral Land Commission eventually promotes, encourages invasions, acts of encouragement and apology of crime, it will be held accountable. Do not doubt it. I do not believe the Church will allow this.

Is this also true for the Indigenous Missionary Council (CIMI)? CIMI has every right and prerogative to work with the indigenous community. Now, if it is proven that you participated in an invasion, which fomented criminal practices, you will also be held criminally liable. NGOs that play their part. NGOs, do not apologize for the crime. NGOs, do not divert public funds. NGOs, do not interfere with public administration. In this government, no one has a bill of impunity.

Are you in favor of Pronaf, a program that allocates more than 20 billion reais per year for the financing of family farming? Family farming is not my area, but I am against the program. Public money is not to be thrown in the trash can. Public money is not to be the object of corruption. A country with so many problems as ours, with deficiencies in health, education, people dying for lack of medicine, cannot destine money to fill the tail of politicians.

And money to refinance agribusiness debts? I do not think you have to have differential treatment for anyone, but there are situations where, for technical reasons, this is proven to be necessary. For example: when there is a crop frustration due to force majeure. There agribusiness needs the help of the government. Now the key to the safe is for those who work and produce, it is not for the king's friends.

What should change in agrarian reform legislation? In the issue of expropriation, there are requirements that are somewhat severe. Today, the owner of a rural property, to fulfill the so-called social function, has to achieve the GUT indices, which is the degree of land use, and the rates required by GHG, which is the degree of efficiency and exploitation. These numbers are set by a board and, in practice, there is a very high charge for ownership to be considered productive. There are adverse situations for producers.

In what cases can this flexible standard occur? When there is, for example, a fall in soybean production. There are places where the droughts are constant, in which summer they compromise the harvest, in which the ox does not become fat. How will you require a productivity index of 80% in the semi-arid? It takes an elasticity in that.