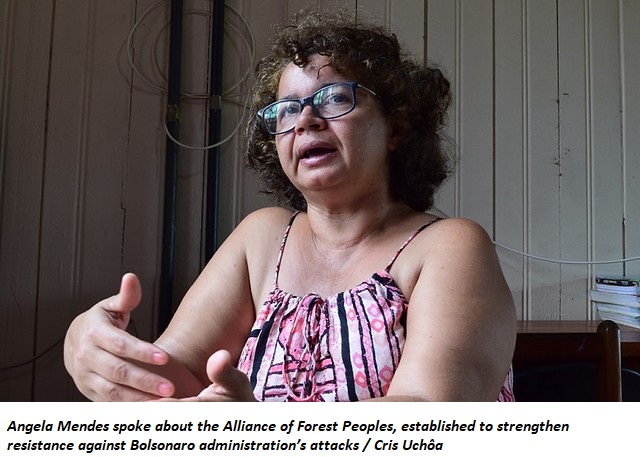 By the banks of the Xingu River, in the Brazilian state of Mato Grosso, a new front to defend the environment and forest peoples was born. Next to chief Raoni, Angela Mendes, the daughter of trade union leader and environmentalist Chico Mendes, and indigenous activist and politician Sonia Guajajara officially launched an alliance on Jan. 15 against the environmental and indigenous policies pushed by the far-right president of Brazil, Jair Bolsonaro.

The launch of the Alliance of Forest Peoples took place during a meeting that brought together hundreds of indigenous activists from different ethnic groups coming from several Brazilian states.

Angela Mendes, an environmentalist and coordinator of the Chico Mendes Committee, granted an exclusive interview to Brasil de Fato, in which she says that the goal with the alliance is to conceive strategies to resist the policies of a government that “declared forest peoples their enemies.”

“When the president says that he will demarcate no indigenous lands, and when he tries to eliminate the Environment Ministry and all agencies in charge of implementing public policies for the forests, that means that he is taking a major offensive against these communities. All of them,” the activist said.

Mendes told Brasil de Fato that the newly launched alliance is inspired by the alliances created by her father decades ago to advocate for the demarcation of territories for traditional communities, and was conceived last year during the Chico Mendes Week, an event held in Xapuri, Acre, in the Brazilian Amazon.

The alliance plans to focus on exerting political pressure and exposing cases to the international community.

“Today, agribusiness is calling the shots in the country. Agribusiness is deciding the paths both for the federal government and Congress. It’s agribusiness, with multinationals and big miners, that is behind all that,” she argued.

Mendes also exposed the Bolsonaro administration’s plans to hand over territories to foreign capital. “He spent a whole year [2019] demonstrating how he is going to do that. He did nothing without thinking it through. I’m positive that, in 2020, they will push wicked plans,” she said.