“To plant strategic seeds to change the country,” says Tereza Campello in a MST festival

To the former minister, food systems should guide a change in Brazil’s route and contribute to a progressive government 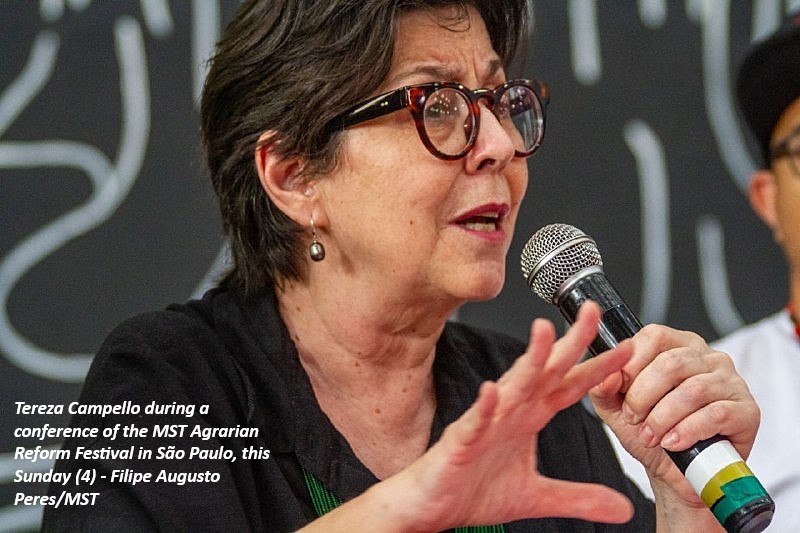 The mission of planting and guaranteeing the population’s access to real food should guide popular movements’ actions during the next Brazilian government, said Tereza Campello, former Minister of Social Development and Fight against Hunger and member of the transition work group of the future government of Luiz Inácio Lula da Silva (Workers’ Party). “The fight against hunger and for healthy food has to be together from the very beginning [January 2023]. It's not enough just to produce [healthy food]. It's necessary to define how it arrives at people's tables. That is fundamental.”

Campello was one of the speakers invited to a debate on healthy food and the fight against hunger that took place this Sunday (4), in the city of São Paulo, during the Agrarian Reform Festival organized by the Landless Workers Movement (MST, in Portuguese). She advocated for the immediate resumption of measures adopted by previous governments that took Brazil off the hunger map.

The former minister considers the transformation of food systems in Brazil to be a strategic initiative that can change the course of the country, creating sustainable jobs and increasing GDP while decreasing the reliance on agribusiness, in addition to setting a paradigm shift in environmental issues.

“We have to think of the food system as an organizer of the progressive field within this new government, articulating the environment agenda with the MDA [Ministry of Agrarian Development] and MDS [Ministry of Social Development]. Also, it has to come with strategic agendas to form a field and give a progressive face to this government, so that it is a truly transformative government”, argued Campello.

According to Campello, “it is necessary to dispute the concept: hunger is one of the manifestations of an economic development model that has to be changed” It is symbolic, according to her, that Brazil has worrying indicators of hunger, obesity, and overweight while at the same time reaching record levels of deforestation, soybean and corn production for export and the use of pesticides.

“The food systems agenda needs to be discussed. We need to produce in a healthy and sustainable way and expand production chains. But above all, we have to solve the issue of food access. Today, 85% of the Brazilian population lives in cities. We need to guarantee that people have access [to healthy food]. They have to be able to replace instant noodles and frankfurter sausage with real food.”

“Today, the industry, trades, and retail sector determine that healthy food doesn’t reach the poor urban areas. We need to guarantee regulation and a change in this logic. [we have to] Discuss healthy food in schools and in their surrounding areas. [We need to] Change the image people have about food through access to information and product labeling”, Campello added.

Edson Leite is a chef with a degree in social assistance and the founder of Gastronomia Periférica, a gastronomy school aimed at young people from São Paulo's poor urban areas.

He corroborates with the vision that “our people need to have access [to healthy food]”. To him, the urgency of tackling the hunger that has been plaguing the country prevents strategic actions and taking the debate on healthy food to the poor regions.

“To people suffering from hunger, frankfurter is good food. So are instant noodles. That’s what the mother of a hungry kid can afford,” he stated, highlighting the importance of nutrition education during childhood. “It is necessary to get out of emerging discussions, [and] educate our kids [by] taking the debate about healthy food to schools.” 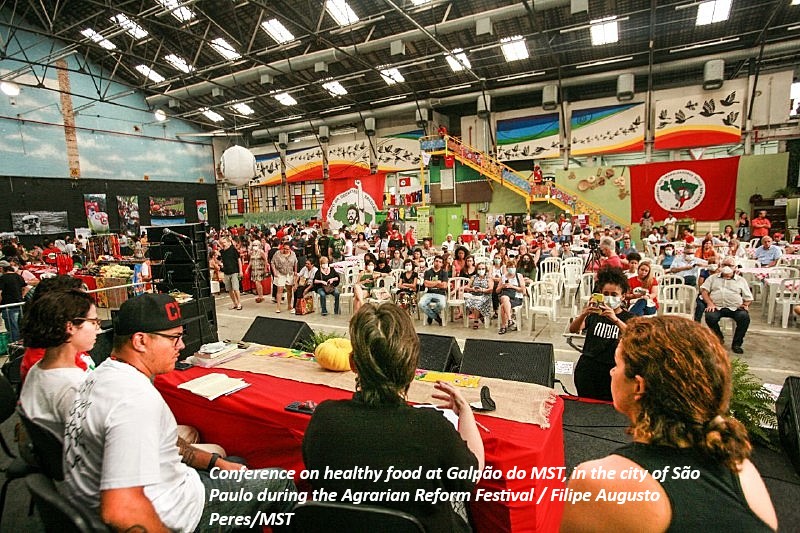 To dispute with the processed food industry and end agribusiness subsidies

Preto Zezé attended the event as Cufa’s representative (Central Única das Favelas, a NGO that supports favela’s residents). He recalled the importance of community kitchens as tools to mobilize people, but, mainly, to tackle hunger by providing real food, an effective alternative to processed food, which has a high rate of fat and low nutritional value.

He also highlighted the solidarity that popular movements showed through food distribution during the most serious moments of the pandemic. Zezé considers these experiences to be examples for the formulation of public policies. The donations raised by CUFA with the support of the MST helped 15 million people.

Historian Adriana Salay added proposals to guarantee healthy food in Brazil. To her, it is necessary to cancel subsidies and public incentives for the production of processed food and all public purchases of food should be based on the National School Feeding Program guidelines (PNAE in Portuguese), which prioritize fresh and organic food. “Imagine how fantastic it would be for the Army to eat healthy food produced by the MST.”

Salay, who created the Quebrada Alimentada project, which distributes lunch and basic-needs grocery packages in São Paulo, also argued that to really change things, it will be necessary to dismiss profit as a decisive factor in defining what is and what is not food. “Pesticides, hunger, and processed food are symptoms of this society. They cause things, make people sick and kill them, but they are symptoms of a system based on profit.”

On the same line, Ceres Hadich, a farmer settled in the north of Paraná and a member of MST’s National Directorate, denounced the capitalist contradiction of Brazil being a country rich in food, but with millions of people dealing with hunger. “This shows that agribusiness is a big lie.”

To Hadich, master in Agroecology and Sustainable Agriculture and one of those responsible for the Marmitas da Terra project, the idea of an agricultural vocation guided by an “oppressive, exploitative, patriarchal, racist and slave system” needs to be changed. “The system guided by private property and large estates needs to give way to family farming agroecology.”