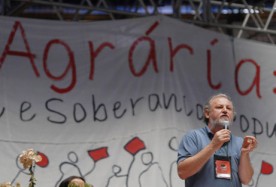 For more than 30 years in the struggle of landless rural workers, João Pedro Stédile, a gaucho of Italian descent, became known for the direct way he manifested his political opinions. In this exclusive interview with ABCD MAIOR, the coordinator of the MST (Movement of Landless Rural Workers) estimates that Brazil is going through an ebb in the popular movement. Stédile gives a grade of eight to President Dilma Rousseff and five for the entire government, which brings together sectors of the bourgeoisie and workers.

There is very little left formulation on the national situation. You fall into the management of the PT within the model of neo-developmentalism? Why?


The formulation that social movements made, including the MST, Via Campesina, is that the governments of Lula and Dilma are the result of a political front of classes of Brazilian society. Society participates from the big bourgeoisie to the poorest. And this gives stability and popularity to the government, but it keeps the government as a composition of classes with heterogeneous decisions and, sometimes, even contradictory, now benefiting the bourgeoisie, now the workers, now the poorest. On the economic front, the government itself is self-defined as neo-developmentalist. It is an important alternative to the toucan project [nickname for the PSDB - Partido da Social Democracia Brasileira (Brazilian Social Democracy Party)], and imperialism, neoliberalism. The neo-developmentalism seeks to develop policies that generate economic growth and income distribution. This is important, but insufficient. For the serious problems of Brazilian society, such as full employment, land for all landless, universal education, decent housing for all and access to culture, can only be solved with structural reforms. What are these reforms? Tax reforms, agrarian reform, educational reform, stopping the allocation of R$ 200 billion of budget for the payment of interest on domestic debt and prioritize education, health and national technology. These reforms will only be viable in Brazilian society, with the resumption of mass mobilization and if we have, within the government, a balance of power of parties more committed to the workers.

Was there an alternative for the Brazilian people, or is another model of development possible, considering the national and international conjuncture at the beginning of this century?

Politics is the art of seeking the impossible. Where should you look to put together forces leading to changes in favor of workers? Initially, the heterogeneous alliance was important to defeat the neoliberal bourgeoisie and subordinate to the interests of foreign capital. But over these past ten years, we have taken steps that could move society, to democratize the media and mobilize the people to a new development program. And our criticism, as a social movement, is that the federal government settled for popularity ratings, with the stability that the alliance with the conservatives has generated. And it did not have the courage to stimulate a debate in society on structural reforms.

What are the limits of the development project proposed by Lula and now Dilma Rousseff?

The structural limit is that you can have policies that create economic growth, and to distribute the income, but do not build a more egalitarian and just society. Instead, the capitalists continue gaining more and more. And it is the nature of capital, the ongoing process, independent of the government, of accumulation and concentration of wealth. The second limit, at the same time, is that current policies do not change the Brazilian economy's dependence on international capital,  the market, investors and technology.  So we can grow, distribute income and the economy remains increasingly dependent on international capitalism, which is a danger to our sovereignty and the future of our people. We need a project geared to the domestic market, for the development of our people and investing heavily in technology nationwide. The third limit of the neo-developmentalism: 30% of all taxes are meant to pay interest and amortization of internal debt to the bankers and their shareholders. According to Márcio Pochmann [Brazilian economist], this account for only 20 thousand families. This is a powerful instrument of income concentration and waste of public money. We need to get this R$ 200 billion and put it into productive investments, education, health and technology. Fourth, are the external attacks that come with the crisis, the de-industrialization of the economy, denationalization of our natural resources and currency speculation by the market. Then the crisis of capitalism that will come out, can compel the Government to bring to society a new development project.

Regarding land reform, what are the advances and retreats during these ten years?


Over the past decade, there has been progress in terms of land reform. Land reform is a public policy that will lead to the democratization of land ownership, as well, to the largest possible number of citizens. In the last ten years, the concentration of land ownership has increased. And even worse, concentrated in the hands of businesses outside of agriculture and of foreign capital. Dilma's government could not even solve the social problem of 150,000 families encamped, some for more than five years, along Brazilian roads. Therefore, the Dilma government abandoned agrarian reform, deluded by the success of agribusiness that produces, makes money, but concentrates wealth and land and increases poverty in the countryside.

Regarding the Dilma government, how do you assess the ideological point of view: from one to ten, what grade?


President Dilma has a good personal and ideological performance, give her an eight. The composition of her government, formed by the political forces that have control of the ministries, is far worse than under Lula. They are arrogant and unaware of the priorities of the people. They are still navigating with the social policies of the Lula government. Give them a five.

In your opinion, does the class struggle still exist? Does the unity of rural and urban workers remains a cause and a necessity?


Capitalism is a mode of production that generates social classes, not only different, between owners of capital goods, sellers of labor, peasants, as antagonistic classes. So if there is capitalism, there is class struggle. And to solve the problems of the rural and urban working classes it is necessary to build the unity of interests. This unity consolidates in proposed programs, in common collective actions, in political parties that give them ideological unity, and especially in mass mobilizations. This must be the constant effort of all leaders and organizations of the working class. Seek unity in many different ways, in order to have enough strength to face powerful enemies. The alliance of the working class sectors with sectors of the bourgeoisie, can even result in votes and stable governments. But they do not solve the structural problems of society and, sooner or later, they will explode. Just study a little history of our people.

Progressive municipal administrations, as São Bernardo [a city near São Paulo], can help strengthen organizations like the MST who defend family farming and economic solidarity?


We are devotees of Saint Antonio Gramsci[1], most interesting of the Italian saints, especially because he was wise and committed to the  workers. And he said that the class struggle occurs in all areas of modern society. Be it in electoral disputes, be it in many spaces of small powers, which he called the "extended state." Therefore, all spaces, a newspaper, a radio, a community television, a union, a city, a state government ... all are spaces that can accumulate forces for the  working class project or can accumulate forces for capitalists and exploiters. We believe and advocate that local governments can and should be spaces critical to develop public policies in favor of the needs of the people, democratic popular participation in municipal decisions, etc. In the specific case of peasants, local governments can do much, either in universal education, in guaranteeing the purchase of food products for schools, school lunches and other public demands of the municipality. At least pressure these governments in applying laws, for example, limiting the use of pesticides, which poison the population, environmental control laws, etc.

Are there vanguard parties and organizations concerned with this construction? What movements do you see as political actors in the immediate future and the medium-term?


Unfortunately, in the generic sense and including all rural and urban classes, we have had a period of ebb of the mass movement. And this political force withdrew from the class acting in disputes of the society. However, these periods are limited, at some point there will come a new process of ascent. Nobody knows when or how. And during times of reascension it is possible to rearticulate organizational forms and political-ideological forces. So we are now living an apathy, in terms of political organization, which leads only to contested elections. These are necessary, but insufficient for the working class project. So, in difficult times like this, we must invest in the training of militants, in stimulating social struggle, and the construction of alternative media ... until the tide changes..

The MST has long denounced the control of politics by the judiciary in Brazil. This offensive of the right around the political exploitation of the monthly allowance[2] as a tool to combat the PT [Worker’s Party], is this part of the same process of subordinating justice to political rights?


Sure. The Brazilian ruling class is very smart and experienced. Not for nothing that they have given the orders for 500 years. The ruling class knows it does not have hegemony in the federal government. Participates, but not able to mandate. So, to counteract the forces of the working class in the last ten years, the priority of the bourgeoisie, besides making money in the economy, has been using up the judiciary and the media to combat the ideas and programs of the working class. And the recent episode of the STF [Supremo Tribunal Federal – Federal Supreme Court] is just one chapter of this offensive and hegemonic control that the bourgeoisie has on the judiciary and use it against those who are clearly committed to the working class.

The MST has planned initiatives to denounce this kind of legalization of politics?


We are talking with other social movements and popular forces of the working class, with the CUT [Central Única dos Trabalhadores - Unified Workers' Central], unions etc. ... and immediately we are proposing that, in every state and region of the country, there will be plenaries, with the largest number of social activists, so that, at base, to discuss what to do to counter this offensive. And we will discuss all sorts of possible actions, the response in the media where we have control, in mass actions, and even in the legislatures. We cannot sit still and be quiet. Because the judiciary attempts to criminalize those who struggle, or that advocate structural changes.

What weight do you assign to the regulation of the media in building a democratic and socially just country? How can an independent media, able to confront mass information by the big media networks, be created?


The ruling class has the hegemonic control of the media, one of its main weapons to maintain control of the population, to trick it and make the class struggle against the people and workers. Therefore, it is essential we work in two directions:

a) fight for the democratization of the media. It is absurd that the control that O Globo[3] exercises over Brazilian society, and still funded with public money, for example.

b) build our own popular media, to make this contest of ideas in a democratic way, but with the same conditions.

[1] Ed. Note: Stedile is joking by labeling Gramsci a “saint.”  Gramsci was an Italian Marxist, founder of the Italian Communist Party and imprisoned for his opposition to Benito Mussolini and fascism.