Police arrested landless activist after he was attacked by Bolsonaro supporters; Amorim was released hours later 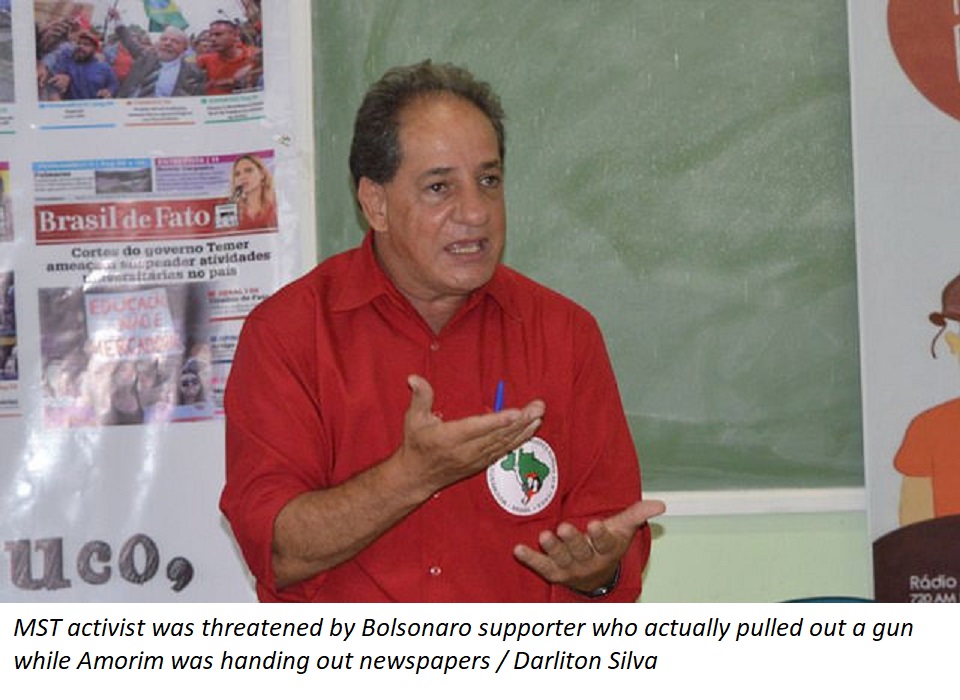 The member of the national board of the Landless Workers Movement (MST) Jaime Amorim was arrested by the military police in downtown Caruaru, Pernambuco, while he was handing out Brasil de Fato newspapers this morning, and was only released hours later, in the afternoon.

Witnesses say supporters of Brazil’s presidential candidate Jair Bolsonaro threatened and attacked the activists who were handing out copies of the BdF special edition on the elections.

Francisco Terto, from the Pernambuco state board of the MST, said a group of Bolsonaro’s supporters started the altercation. “It was a group supporting the ‘Thing’ [Jair Bolsonaro] in plainclothes, two military officers riding a motorcycle. One of our comrades was handing out the material. They [the officers] were not wearing badges and started to shout swear words. So we tried to talk to them about the risk our country is facing, and they became violent and got out of their bike,” Terto said.

After threats, one of Bolsonaro’s supporters identified as a police officer who was on his day off and pulled out a gun, aiming at the activists. Jaime Amorim was insulted and punched in the face. A 17-year-old who was handing out the newspaper was slightly injured. The altercation only stopped after the police came and Amorim and the police officer who attacked him were taken to the police station.

::: Map shows 133 attacks by Bolsonaro supporters in less than a month

The MST released a statement saying the police were trying to keep Amorim in custody claiming he was breaking the electoral law. However, lawyer Patrick Mariano argued there is nothing illegal about handing out newspapers on the eve of the election – even if it were campaign material, that would be legal.

“There is nothing illegal or breaking the electoral law. You can campaign until 10 pm tonight,” the lawyer explained.

After being arrested, Amorim reiterated how important it is for activists to keep working until the last minute. “The important thing is, we can’t miss one minute. We have to keep fighting for each and every vote,” he said. 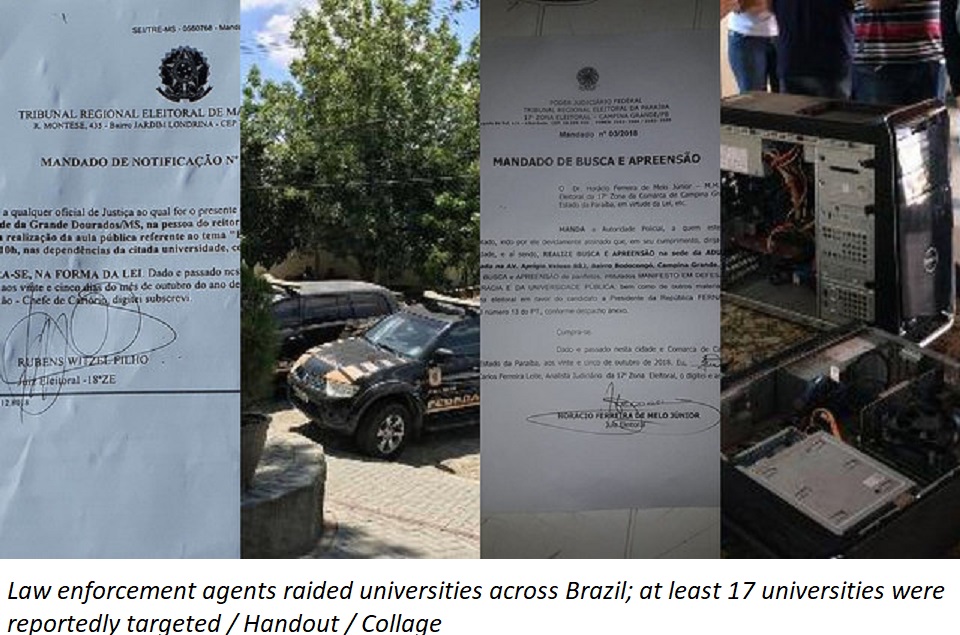 While the judges who issued the orders argue the materials seized were used to campaign for the Workers’ Party presidential candidate, Fernando Haddad, many of them did not mention any of the presidential hopefuls.

On Thursday morning, armed federal officers raided the Federal University of Campina Grande Faculty Association to execute a search and seizure warrant issued by electoral judge Horácio Ferreira de Melo Junior to seize the “Manifesto in Defense of Democracy and Public University,” signed by the union and endorsed by its faculty members. They also seized the hard drive of the computer of the union’s press office.

A psychology professor and the association’s director Tiago Neves argued that, while the manifesto does have political content, it does not endorse one candidate or the other, even though it ultimately collides with “a candidacy that somehow goes against this banner.”

In Paraíba state, men who claimed to be members of the Regional Electoral Court (TRE) questioned a professor at the State University of Paraíba on Wednesday.

The president of the university faculty association, Nelson Júnior, wrote that men wearing TRE gear, but who did not show any ID, stormed into a professor’s classroom after receiving a call reporting that she was campaigning for a candidate. “She obviously wasn’t. The professor was teaching a class based on a movie and they left,” Júnior wrote.

“We want professors to continue to teach what they teach. There is freedom of political debate in our society. They cannot ask for votes on university premises, but they can talk about politics and platforms. After all, we live in a democracy,” the president of the faculty association added.

Another episode happened on Tuesday, when police officers raided the Fluminense Federal University, in Niteroi, Rio de Janeiro, to take down an anti-fascist banner, even though it did not mention any specific candidate.

The São João Del Rei Federal University, in Minas Gerais state, also received a court order to take down a statement from its website in favor of democratic principles and against violence in the 2018 presidential elections, signed by the dean’s office. They have 48 hours to remove the content.

“Violence that affects minority groups today in our society – black people, indigenous people, quilombolas [resident of quilombos, settlements set up in Brazil’s rural areas, mostly by escaped enslaved people of African descent], LGBTI+ people, people with disabilities, women – is spreading to groups that oppose the doctrine of one of the candidates. Even the university, a necessarily democratic, plural environment of knowledge, art, and culture production, has been threatened in this context of violence and disrespect for democracy,” the university’s statement reads.

While teaching a social media class about fake news in the Pará State University (UEPA), professor Mário Brasil’s classroom was raided by military police agents, as reported by the UEPA Faculty Union.

A geographer and professor at UEPA, Daniel Sombra said the incident sets a clear precedent against university autonomy, plural thinking, and respect to social sciences traditions, and is an attack to freedom of thought.

Another attack on university autonomy happened when judge Rubens Witzel Filho issued on Thursday a warrant to stop the Greater Dourados University from holding the public lecture “Crushing Fascism,” which was scheduled to take place that same day.

At least 17 universities have been raided in the past few days, O Globo newspaper reported. 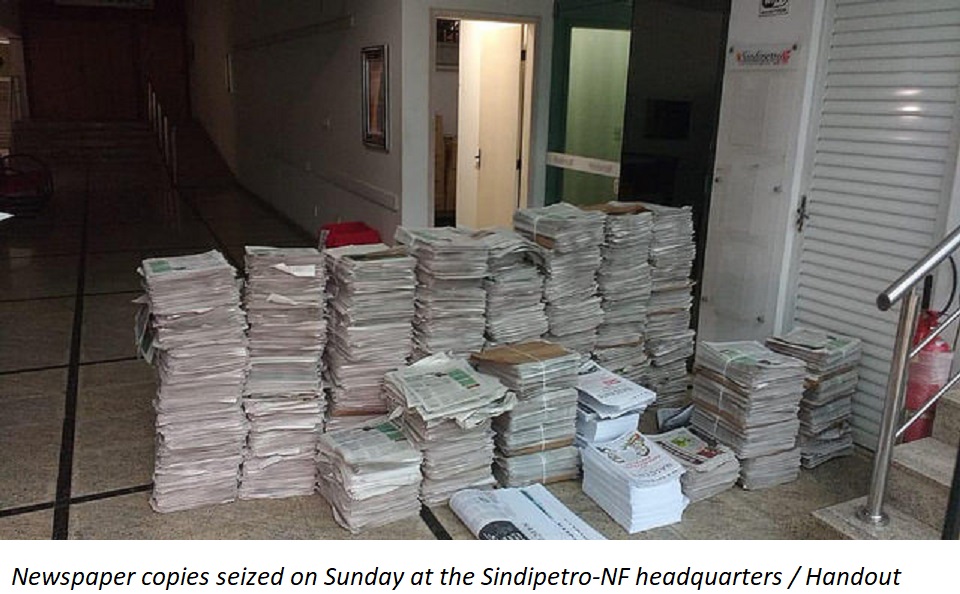 Law enforcement officers raided the headquarters of the Union of Oil Workers in Northern Rio de Janeiro (Sindipetro-NF) in the city of Macaé last Saturday, Oct. 20, and seized copies of the Brasil de Fato special compact edition on the elections, as well as copies of the Boletim Nascente, the union’s weekly outlet.

There are reports claiming the officers, working for the regional electoral court (TRE), tried to jump over the gates of the headquarters and threatened to shoot at the doorman if he didn’t open the door. As it was Saturday, there were no activities at the building. A union director had to go to the facilities and made sure the authorities had free access to it.

"Oil workers have always been in favor of an independent, alternative media. It is not a coincidence that we are constantly discussing how we should counter the mainstream media that attacked Petrobras for years without any concern for the company’s image. So, for this union, there is no wrongdoing in the entity’s practices, as it has a commitment, in its bylaws, to the members it represents and the people in the cities where it operates,” the Sindipetro-NF wrote in a statement.

Lawyer Patrick Mariano, a legal adviser for Brasil de Fato, pointed out this special edition compares the platforms of the presidential candidates in Brazil’s run-off election – far-right front-runner Jair Bolsonaro and left-wing Fernando Haddad –, and is “deeply relevant” to the people. “As citizens, we cannot understand this persecution, except for its selective nature. It’s an offense against and an assault on freedom of press, expression, and opinion. This arbitrary action will be publicly and legally challenged.”

He also says the newspaper has been around for more than 15 years and it has consolidated its position as a people’s outlet publishing critical reporting, gaining respect for its work.

“The TRE move shows arbitrariness. No one was served, there was only this out-of-the-ordinary search and seizure [operation]. While other newspapers exposed WhatsApp actions of unimaginable proportions and you don’t see anything to counter that, the TRE is persecuting people’s media efforts. We hope this material is returned,” he adds.

Brasil de Fato contacted the TRE, but its PR office did not immediately respond to requests for comment.

"Brasil de Fato publicly and firmly repudiates the warrant issued to search and seize thousands of copies of the special Elections 2018 edition of the compact newspaper ordered by the Regional Electoral Court (TRE) this Saturday (20) at the headquarters of the Union of Oil Workers of Northern Rio de Janeiro (Sindipetro-NF) in the city of Macaé (RJ).

The order, issued by judge Sandro de Araújo Lontra, signals a clear attempt to censor and coerce the alternative media. The newspaper’s content is entirely and strictly journalistic, and all information included in it was appropriately investigated and even reported by mainstream media outlets.

This attitude is absurd and strengthens Jair Bolsonaro’s campaign, which is based on spreading fake news and encouraging violence. Part of the mainstream media supports him every day without ever being coerced.

The decision is yet another proof of how partisanized sectors of the judicial system are, as they want to make sure the election results support the interests of the elite and international capital.

Unlike the traditional mainstream media, we have never hidden our editorial guidelines in our 15 years of operations, and we’ve always been committed to the truth and journalistic rigor. Therefore, the order becomes a clear example of the sensitive political moment the country is facing, with constant attacks on democracy and the intensification of a state of exception since the 2016 coup.

It is important to highlight that, in face of thousands of scandals where fake news are being distributed via WhatsApp and tearing the Brazilian electoral process, the court system has not taken the necessary measures to rein in and stop the dissemination of those kinds of materials. This was an order to censor free critical thinking.

We reiterate that attitudes like this will not intimidate us. They will actually only strengthen our commitment to the truth and the Brazilian people, and the need to fight to make the necessary changes for our country. We will take all possible legal measures against this abuse.

The Brasil de Fato newspaper reinforces its commitment to democracy, freedom of press, and a people’s viewpoint on Brazil and the world. We have overcome a dictatorship that silenced and censored the arts, thinking, journalism, and all of society. Torture is unacceptable and we will keep exposing candidates who support and encourage it. Just like we will keep opposing whoever wants to bring the gag back.