Movements on Brazil elections: let us not be overwhelmed, the struggle continues 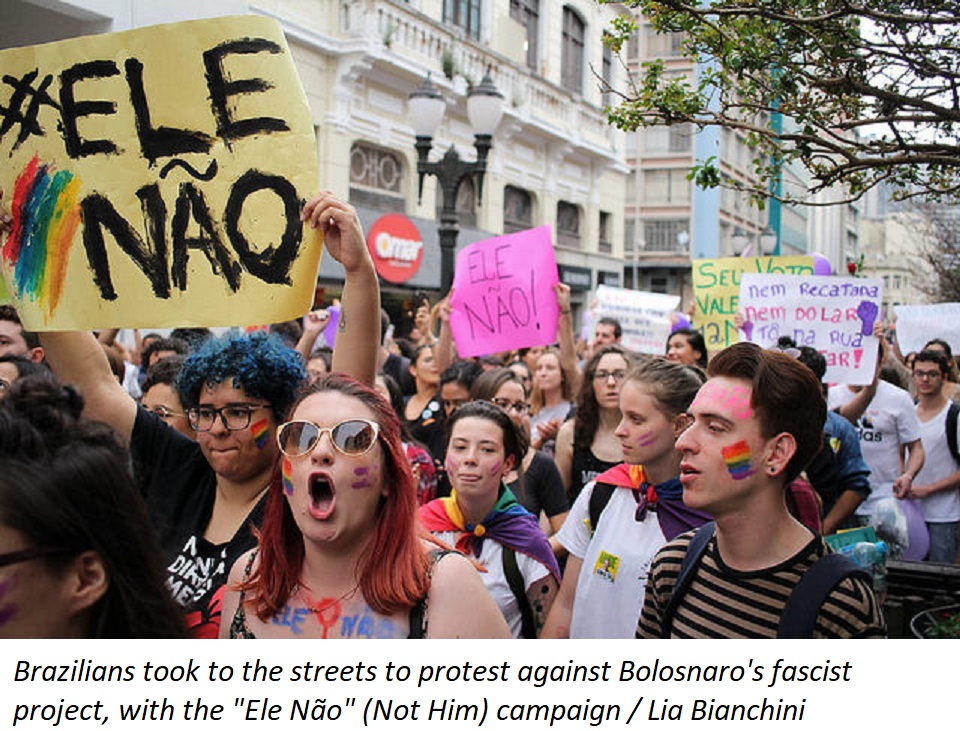 Two of Brazil's major people's movements released a statement about the country's elections. Read it below:

The election is over, but the fight is just beginning:

We hold our heads up resisting for Brazil!

We lived an entirely atypical electoral process. Since the end of the military period, we have not had the political imprisonment of a leader, such as Luiz Inácio Lula da Silva, who was unjustly convicted and whose candidacy was contested by the Superior Electoral Court. A process in which forces that had so far operated in the undergrounds, have emerged in the presidential dispute provoking a great wave of hatred and violence against the Brazilian people.

Our candidacy was a democratic response to arbitration that has contaminated the political scene since the parliamentary coup that overthrew President Dilma Rousseff in 2016. We faced abuses and scams practiced by networks committed to petty anti-popular, anti-democratic and anti-national interests.

The election of Bolsonaro represents a political rupture, whose signs are represented in the murder of Marielle, of Moa Katendê - black leader, capoeirista in Bahia, Charlione - a young man from Ceará who was taking part in an election parade in support to Haddad’s candidacy. They threaten our lives because we fight for an equal and just country.

Even under bullets, we have resisted defending national sovereignty, raped in so many ways in the last two years. Protected by sectors of the judicial system and the monopoly media, the candidate Mr Bolsonaro was left free to finance his lying machine with clandestine money, incite violence against his opponents, escape public debates and circumvent electoral rules.

These forces, through deception and truculence, with maneuvers still subject to investigations, arrived at the Presidency of the Republic.

Despite so many obstacles, our alliance organized a powerful resistance throughout the country, which led to the realization of the second round and a formidable movement in defense of civilization against barbarism, democracy against dictatorship, love against hate.

In this second round, which ended yesterday, men and women from all quarters have expressed their support for the constitutional pillars of our country. This journey would never have been possible, however, without the dedication and courage of the social movements and democratic sectors of society.

We will continue to defend the Constitution, social diversity, the rights of all, a Brazil for all and fight the danger of dictatorship, the elimination of social achievements, the sale of public assets, the delivery of national wealth, racism and misogyny, homophobia and the threat of institutionalized violence.

At the moment, it is essential to remain together and cohesive around democracy, national sovereignty and rights.

We must not let ourselves be overwhelmed by fear, for we have each other. Different from what they think, the Brazilian people will know how to resist.