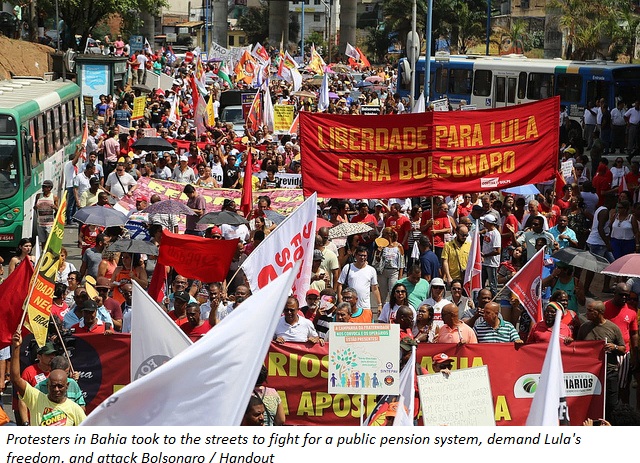 Brazilians are holding rallies and protests today in several cities in the country as part of the National Day of Struggle in Defense of the Pension System. Ten labor union centers, the People’s Brazil Front, and the People Without Fear Front are organizing the demonstrations. Protesters will take to the streets in at least 126 cities, according to the Unified Workers’ Central.

In February, the Jair Bolsonaro administration submitted to Congress a bill that represents the dismantling of the public pension system in Brazil, the end of retirement and social protection of older people, pensioners, and poor people with disabilities.

The proposed pension reform the government is calling ‘The New Pension’ also creates an individual capitalization system and a multi-billion fund that private banks would manage.

“They [want to] hand everything over to banks. Employees would have to pay [contributions] by themselves and employers and the government would not pitch in anymore. It would be all on workers’ shoulders,” said Ubiraci Dantas Oliveira, chair of the General Workers’ Center (CGTB). Not only that, companies will no longer have to pay contributions for retired workers they employ or pay the 40-percent penalty over the balance of the employee’s guarantee fund for length of service when the worker is laid off.

The proposed changes in pension rules give special, more lenient treatment to the military and makes no mentions about imposing a wealth tax or a tax on the profit of highly mechanized companies that employ few workers.

The bill also removes retirement rules from Brazil’s Constitution, which could lead to even more vulnerable conditions for workers in the future.

“If the bill is passed, any government will be able to push even worse rules without having to change the Constitution and pass it by a two-third majority in Congress,” said Edson Carneiro, the general secretary of Inter-union – Working Class Center.

The unions say this is the first major day of demonstrations against the dismantling of the Brazilian pension system this year. They believe it will galvanize a general strike over the next few months that can stop the proposed reform, like it happened in April 2017, when about 40 million workers walked out and defeated the pension reform bill proposed by the Michel Temer administration. The demonstrations were considered the largest in the country’s history.

See "On the end of the public retirement and rural workers" on how the proposed pension law will affect rural workers.