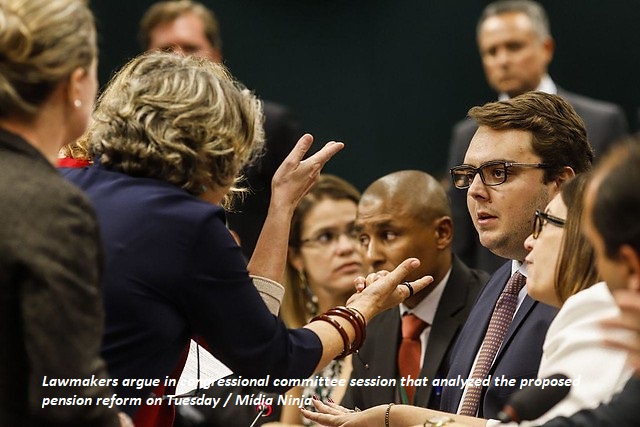 A Brazilian congressional committee approved late on Tuesday the constitutionality of the pension reform bill proposed by the Jair Bolsonaro administration by 48 votes to 18. Now the bill will proceed to a special commission before hitting the floor of the country's lower house.

The vote took place after rapporteur in the Constitution and Legal Affairs Committee (CCJ) presented changes to the bill based on negotiations between government allies and the swing votes among right-wing members of Congress.

The changes included removing part of the text that eliminated a penalty over the balance of the employee’s guarantee fund for length of service paid by the employer when a retired worker is laid off. A second change was made to keep federal courts’ jurisdiction in lawsuits against the Brazilian social security institution.

Another change was regarding the compulsory retirement age for public servants in Brazil, which, in the original draft, would be removed from the Constitution and require further legislation to pass in Congress. Finally, another tweak was to remove part of the text that gave the executive branch the exclusive power to propose changes to rules of the pension system.

“It’s a minor change,” said Ivan Valente, the leader of the leftist Socialism and Freedom Party (PSOL). “Actually, nothing very substantial was negotiated.”

Valente argued that the government promised positions and funds to convince right-wing members of congress to swing their vote and pass the bill.

These right-wing members of Congress had been criticizing aspects of the bill in recent weeks, but most of the critiques, regarding the effects of the reform to rural workers and a Benefit of Continued Social Assistance for older adults, were not considered in the negotiations.

The opposition tried to postpone the session in the committee during the afternoon as the government failed to present the technical data and reports to support the bill. Earlier this week, the government’s decision to ban the access to supporting research provoked a backlash and mobilized opposing members of Congress.

The government said on Tuesday that the supporting data will be presented in the next phase, as the bill will now be reviewed by a special commission.

Yesterday, 103 deputies from five parties – the Workers’ Party, the Communist Party of Brazil, the Democratic Labor Party, the Socialism and Freedom Party, and the Sustainability Network – signed the petition to postpone the session.

Their petition was based on two constitutional provisions. One requires that budget impact analyses must be presented to support measures that create or change mandatory spending or tax breaks.

The other provision establishes that the analysis of any bill could be postponed for up to 20 days if one fifth of the members of the house file a petition. In the country’s lower house, that means exactly 103 deputies.

The opposition claims that these provisions were used when the Congress passed a spending cap bill during the Michel Temer administration. “We are asking the same thing they [neoliberal lawmakers] created and used in the past, but that doesn’t count for this government,” said Maria do Rosário, a congresswoman and deputy leader of the Workers’ Party caucus. “It is like they didn’t have to present the numbers or be transparent.”

Allies of president Jair Bolsonaro opposed the petition, arguing that the bill had to be analyzed fast.

“It’s the bulldozer trying at all cost to attack the rights of the Brazilian people – in this case, specifically, by dismantling Brazil’s social security system, so that people don't have the chance to retire anymore,” Socialism and Freedom Party congressman Glauber Braga said.

The chairman of the committee, Felipe Francischini, rejected the petition presented by the opposition, claiming that ten of the 103 signatures were not notarized.