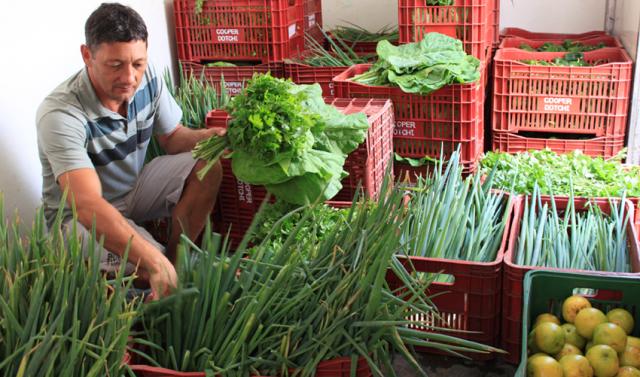 At the entrance of the settlement, the placard gives a welcome to the visitor: "The future is in organic production." Next to the phrase, the symbol of the Landless Workers Movement (MST) identifies the area of ​​51 hectares in Araquari in the northern region of Santa Catarina, 20 km from Joinville.

The place that houses ten families is one of 18 settlements for food producers Cooperdotchi, the MST cooperative that brings pesticide free fruits and vegetables to the table of public schools and social agencies in the region. Built in 2006, the entity involves 500 families and every year consolidated the ideals of solidarity and cooperation, countering the capitalist logic.

The cooperative not only ensures the subsistence of individuals, but make possible investments to expand the cooperative itself. The goals for this year are audacious: to increase production, which last year reached 600 tons in nature, and to break gradually from the industrialization of food in order to avoid waste. In all, the MST has ten cooperatives in Santa Catarina. 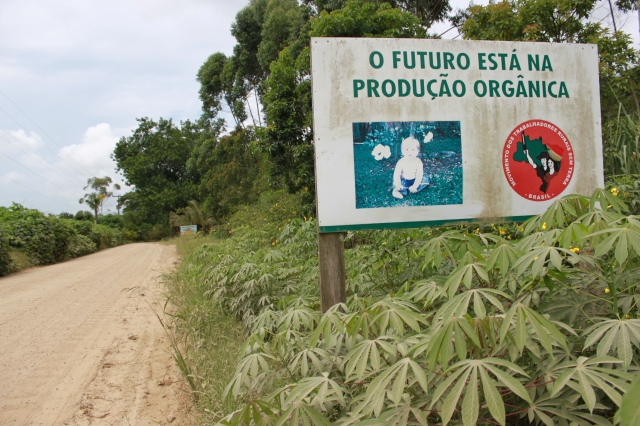 The main social movement fighting for land reform since the 1980s the MST has in the cooperatives a collective strategy of organizing production in the settlements.

One challenge of Cooperdotchi is the achievement of the certification seal in the agro-ecological line, shared method of participatory certification of Ecovida Network. In Araquari, one of the changes adopted to look for the certification is the planting of medicinal herbs by the dirt road leading to the settlement and production areas. The plant popularly known as the “Hand of God” creates a barrier between the road and planting, preventing dust from contaminating the food grown.

The settlement of Irineópolis already obtained certification. The goal is to secure the title for all settlements related to Cooperdotchi and thus facilitate the marketing of food harvested in the properties.

For this, the work has already begun, with the use of bio-fertilizers and organic fertilizers, mainly manufactured with animal waste, and ultimately produced in the properties of the settlers, besides the collective activities of training of farmers.

The coordination of the sector of the purchases and sale and the finances of the cooperative is headed João Guilherme Zeferino. For 12 years he lived under canvas1 with Delize and two children waiting for a piece of land. At age 48, he has no doubt of the value of the fight and is optimistic about the cooperative that he helped found.

“It's a guaranteed monthly income. Many farmers cannot survive having to pay water and electricity bills every month, with a harvest every six months. The cooperative movement has been shown to be the only outlet for small producers to remain in the field” he reflected.

Of the ten MST cooperatives in Santa Catarina, five of them, including Cooperdotchi, use the trademark “Terra Viva,” which can be found in major stores. The Cooperdotchi sells on average a variety of 25 products, including carrots, beets, cabbage, broccoli, lettuce, oranges, bananas, apples... . The goal for next year is to professionalize the farmers in a specific production area, to ensure the diversification of products throughout the year.

The national law of 2009 which mandates the purchase of 30% of school lunches to be provided by family farms strengthens the work of the cooperative. In some cities along the coast of Santa Catarina, the shortage of agricultural activity has hampered the enforcement of this law. The Cooperdotchi already has a contract with the cities of Rio Negrinho, Piçarras and São Bento do Sul. The latter is expected to increase the food from 30% to 40%. Negotiations are well advanced in Balneário Camboriú, Barra Velha, São João do Itaperiú, Joinville, Araquari e Garuva. 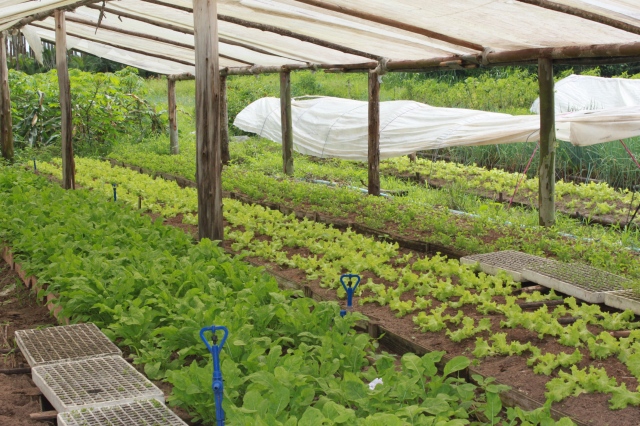 Besides the public schools, another client of the cooperative is the federal government, through the Food Acquisition Program (EAP) implemented by the National Supply Company (Conab), which provides food purchases for registered entities, usually assistance facilities, such  as hospitals and Apaes (Brazilian Association of Parents and Friends of the Disabled).

Reaching out to traditional supermarkets as outlets, is also the cooperative strategy, but with caveats. In the assessment of members, the process can make farmers hostage to the production systems, which force the production and sale in large scale according to the "law of supply and demand” of large quantities of products for small prices, thus "enslaving" them .

“We do not want to produce on an industrial scale. Or else, the farmer will become a factory worker, enslaved the predetermined hours. The intention is to keep them in the field with quality of life,” argues Zeferino.

Located in privileged area, with the advantage of a mild climate, capable of production throughout the year, Cooperdotchi, unlike the other MST cooperatives in the state benefits from the installation close to major urban centers, with easy of disposal of products.

The cooperative takes the name as homage to comrade Dolcimar Luiza Brunet, known as Dotchi, who died in an accident during the delivery of vegetables to the cooperative. The structure is simple, office, separate unit of food and two trucks and a car pick-up used in the distribution of food. The Distribution Center of the Cooperative is in São Bento do Sul. A shed where a furniture factory operated, is now adapted for receiving and handling of food. The workers - all MST settlers - separate and organize food for distribution in schools and institutions.

“With the cooperative, has improved enough for us. A while ago, we produced only to eat, now have the certainty of income,” celebrates Isaías Ribeiro, 25, a partner at the cooperative, in an MST settlement for 11 years. 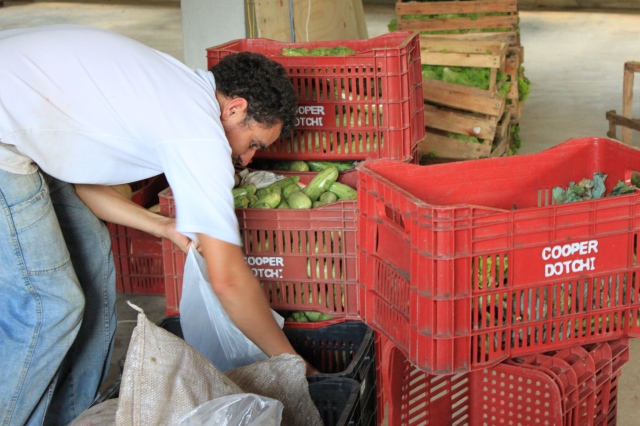 Families living in the settlement in Araquari were camped in Garuva. Among them, the farmer Verildo Zucco, 52. Born in Rio Grande do Sul, he lives with his wife and two children on the property.

“I worked for much of my life as a tenant individually. I only saw the money every six months. With the cooperative it has improved 100%.” 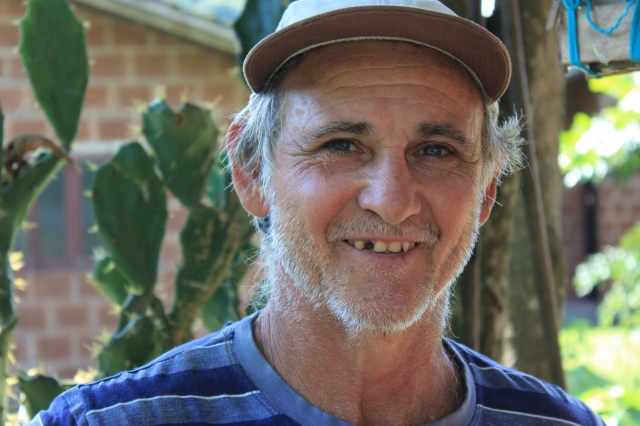 The Cooperdotchi appeared to facilitate distribution and marketing of food. The first two years of bureaucracy were to leave the house in order, with all the necessary legal requirements. In subsequent years, the increase was inevitable, today the cooperative brings together 96 cooperative members. Among the intentions of coordination is increasing the number of members. But the work is done in parallel with capacity building and awareness of farmers. All this is to not lose the collective identity that makes the MST known worldwide as the main thrust of the land struggle and social justice. 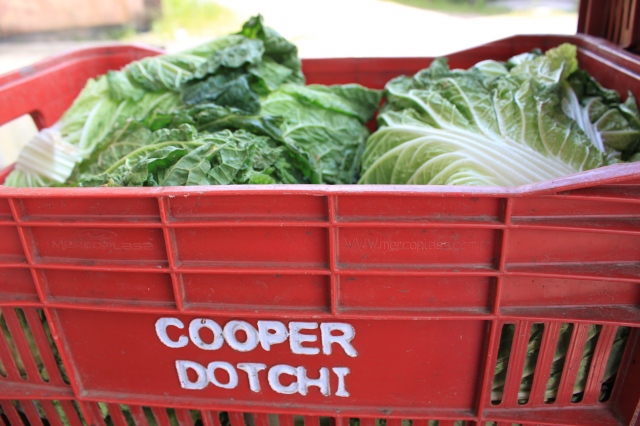 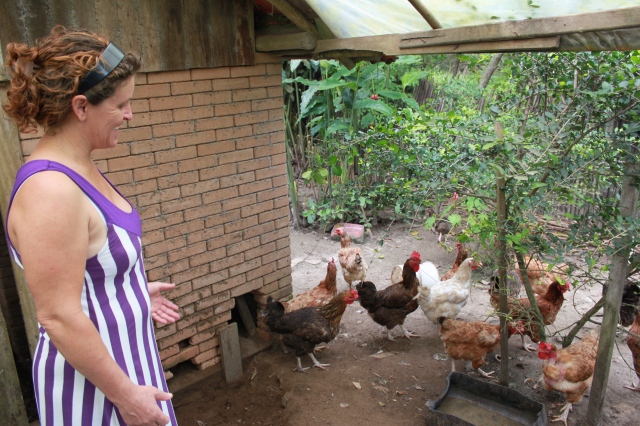 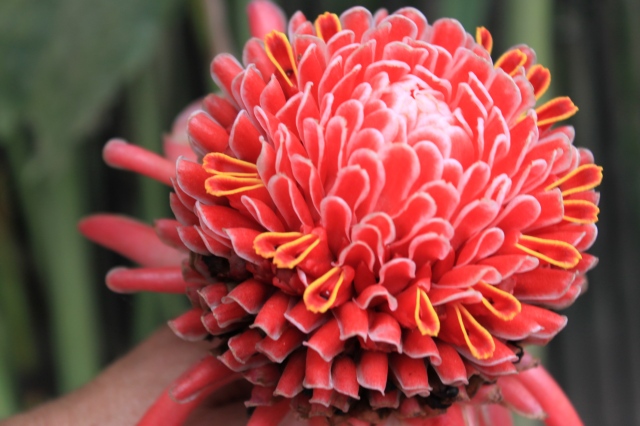 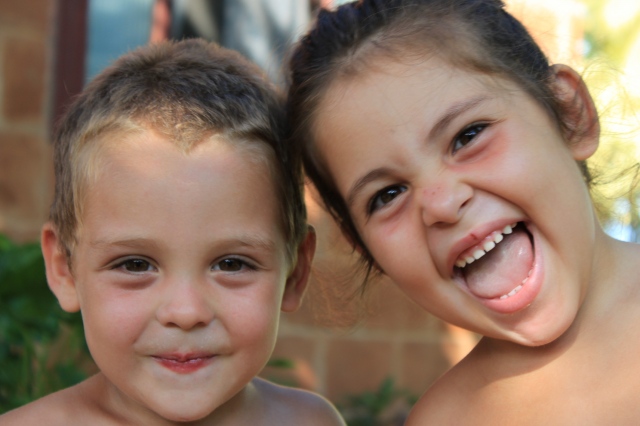