A large-scale farmer is accused of ordering the crime; motive remains unclear 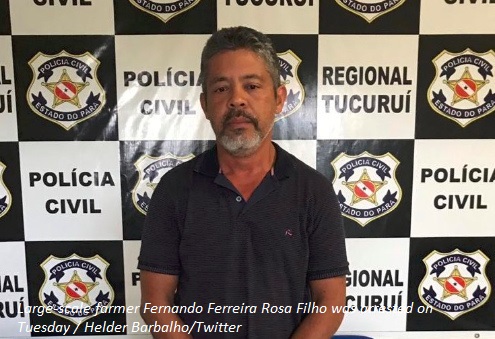 The police arrested on Tuesday in Pará state a farmer suspected of ordering the assassination of Dilma Ferreira Silva, 48, a regional coordinator of the Movement of People Affected by Dams, in the Tucuruí area last week.

Fernando Ferreira Rosa Filho, known as Fernando Shalom, a landowner and large-scale farmer, was detained over the murder of Silva, her husband Claudionor Costa da Silva, 42, and Hilton Lopes, 38, a friend of the couple. The victims were tied up and executed with a bladed weapon.

:: What’s known about the murder of a social leader in northern Brazil ::

The police are still investigating the motive behind the crime. Investigators increased their searches after three carbonized bodies were found 20 kilometers (12 miles) away from the triple homicide scene, raising questions about whether the crimes could be about “witness elimination.”

The police also disclosed the names of the alleged executors. They are four brothers: Marlos Alves, Cosme Francisco Alves, Alan Alves, and Glaucimar Francisco Alves – they are all at large.

The Tucuruí hydro power plant was built during the military dictatorship (1964-1985) and is one of the country’s biggest plants. It is located 310 kilometers (roughly 200 miles) from the capital of Pará state, Belém. Approximately 32,000 people were displaced to build the dam and they have been fighting for more than 30 years to have their rights respected.

In 2011, Silva took part in a public forum with the then president of Brazil Dilma Rousseff and handed her a document calling for a national policy to ensure rights for people affected by dams, especially women.