With the motto, “Women in the Struggle: Sowing Resistance”, over 3,500 women have been occupying Brasilia, between the 5th and 9th of march, during the 1st National Landless Women’s Meeting. 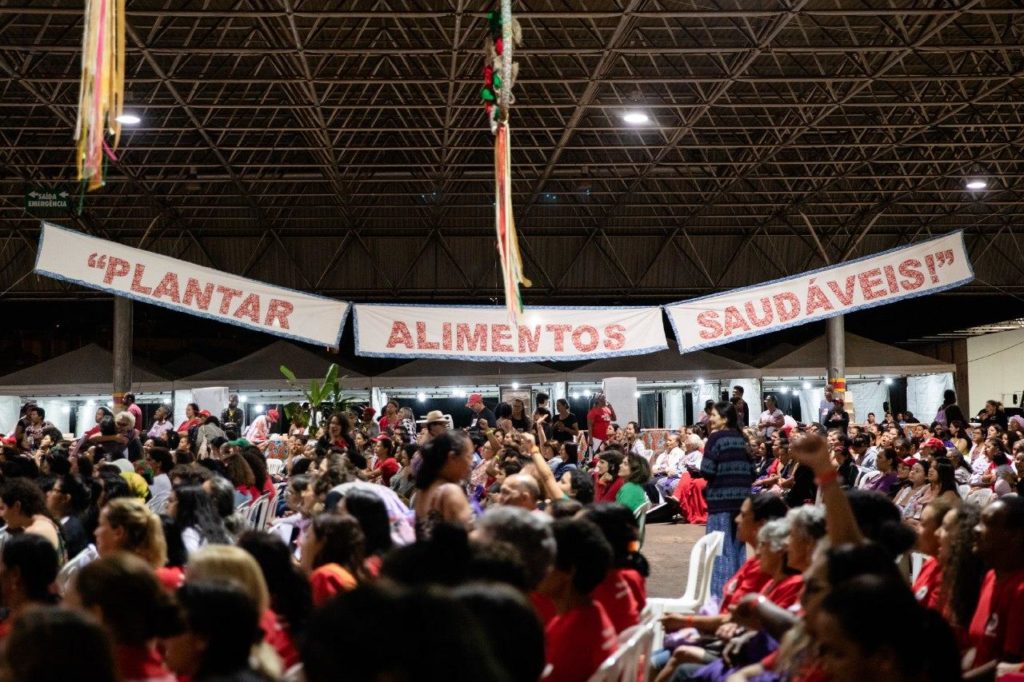 This is the first time in the history of the Landless Workers Movement (MST) that a meeting is spearheaded exclusively by rural women. The meeting will take place at the Parque da Cidade, one of the biggest urban parks in the world and the biggest in Latin America.

“From the Amazon to the south of the country, we have our experiences of resistance and for sure, on this day we’ll make an important diagnosis, but more than that, an idea of how women do and will continue to participate in the struggle more and more,” says Kelli Mafort, part of the national directorate of the MST movement, also explaining that the gathering will serve as a guiding principle for social movements on the question of gender.

MST grass roots have been mobilizing for two years in order to make the event happen. Landless women from settlements and camps from 24 states will take part in debates and workshops on various topics, like agricultural production, the cultivation of healthy foods, combating violence, economic autonomy for women and territorial resistance.

Mafort highlights the fact that the meeting is strategically positioned at the crossroads of attacks by the Bolsonaro government against land reform and women’s issues, and that one of their goals is to outline the medium term vision for the political struggle in the country. “The current situation requires radical action so we can stand up to and defeat those in power. This radicalized struggle, comes from those fighting for land, for rights, but also fighting for life, and when we speak of women’s struggles, we speak of the struggle some are facing to stay alive. So we are talking about extreme occurrences of violence, of femicide, violence that is even worse for rural and black women”, Mafort points out.

The people under pressure

One of the main points the meeting will focus on is legislation (MP 910) that seeks to legalize, until 2022, around 600 thousand rural homes. Public lands that will be appropriated by “grileiros” (those forging documents to obtain land rights) and big rural landowners, according to MST.

“Public land belongs to the people, it cannot be negotiated, sold, it needs to be passed on for land reform in accordance with the Brazilian Constitution, and this legislation is rewarding the criminal “grileiros”, which will certainly increase deforestation, and pressure on the people living in our country”, explains Mafort.

Another topic of discussion of the gathering, showcased by the Movement’s leader, is the February of 2020 decree 10.252, which ends the National Educational Land Reform Program (Pronera). Over 20 years, Pronera guaranteed the schooling of 192 thousand youth, from basic to post graduate education.

Pronera is a matter of social justice, because we know that in the fields is where we have the most social inequality, and it is with rural people that we see the lowest levels of education. Ending this program is the same policy this government has adopted with other ones, that’s why we are seeing long lines at the social security and educational income offices”, denounces Mafort.

In the event schedule, there will also be debates about capitalism, patriarchy, racism and violence, as well as workshops, cultural and artistic activities. This will all culminate in a huge march on March 8th, that will unite the rural and the urban in the country’s capital.

“Over the course of the next couple of days, we will witness the beauty of the landless fight, of women’s fights, and more than surely, we will come out strengthened in our resolve to resist and face whatever battles necessary”, affirms the director.