Saturday, April 17, 2021
MST Occupations and Demonstrations
Oppression of MST and Social Movements
Info Source:
From the MST Page | Translated by Friends of the MST (US) | Original URL: https://mst.org.br/2021/04/17/mst-bloqueia-estradas-e-realiza-ato-internacional-em-memoria-dos-25-anos-de-eldorado-do-carajas/

After 25 years of the emblematic episode, more than 200 thousand peasant families live under the black canvas 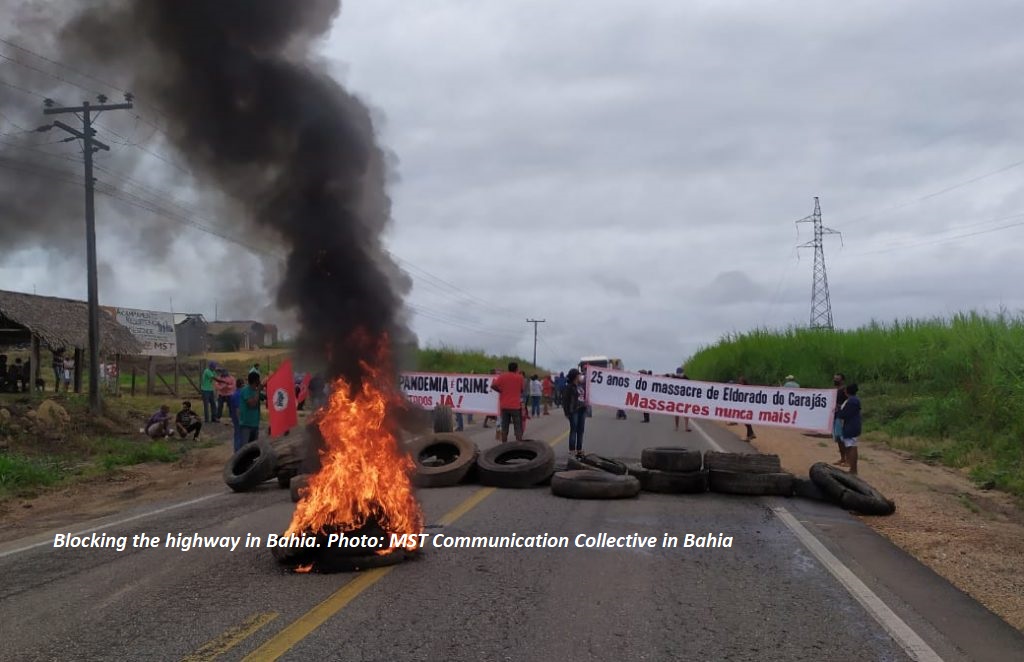 On this April 17th, International and National Day of Struggle for Agrarian Reform (Law No. 10,469 / 2002), the MST carried out more than 50 blockades on state and federal highways. There are 21 minute stops in memory of the 21 dead of the Eldorado do Carajás Massacre, which, on this date, commemorates its 25th anniversary. After two and a half decades, the Agrarian Reform agenda remains a challenge for the Brazilian State, which needs to settle more than 200 thousand families.

After the symbolic mobilization on the roads following the care for life relevant to the time of the pandemic, the Movement makes, at 10 am, the Political-Cultural Act in Memory of the 25 Years of the Eldorado do Carajás Massacre, with online transmission through social networks . Since the last day 9/04, Juventude Sem Terra [Landless Youth] has mobilized the Youth Pedagogical Camp Oziel Alves (in virtual mode).

The “S” curve, in Eldorado do Carajás, was the scene of the biggest massacre against struggling peasants in the country's recent history. When marching to the capital of Pará, thousands of Sem Terra were prevented from following their mobilization and, on April 17, 1996, the police detachment opened fire on the march and brutally murdered 21 rural workers. The episode gained international repercussion and the date was declared by Via Campesina as a milestone in the struggle for land worldwide.

The Political-Cultural Act will be coordinated from Pará and São Paulo, with wide participation of international representations and simultaneous translation into English, Spanish and French. “Every year we do a political, cultural and religious act on the S curve, but, due to the pandemic, our act this year will be a virtual act, as has been the case in various activities celebrating the lives of those who continue to fight for agrarian reform, for justice, dignity, land, healthy work and food,” points out Ayala Ferreira, of the National Directorate of the MST.

On Sunday (4/18), solidarity actions across the country underscore the importance of healthy food production, especially in this pandemic, continuing the MST's food donation campaign for those living in vulnerable situations. In this context, the National Day of Struggle for Agrarian Reform inaugurates the “Parada pela Vida,” [Stop for Life] a popular lockdown articulated by the MST and with the support of other popular movements and organizations to save lives.