The Federal Court of Carazinho (RS) [Ed. the southern Brazilian state of Rio Grande do Sul] acquitted in first instance MST militants Antonio Isaias Vedovatto Silvio Luciano dos Santos, Edemir Fransisco Valsoler, Moroso Ivan de Oliveira, Vladimir Maier and supporters of the Movement, Arno Maier and Jandir Celso eight years after the opening of a case, which was based on an illegal file, done at the request of then Colonel Military Police of Rio Grande do Sul, Waldir João Cerutti Reis.

The document, entitled "Situation of the MST in northern RS" also brought investigations against the National Institute of Colonization and Agrarian Reform (INCRA), the National Supply Company (Conab), the Movement of People Affected by Dams (MAB), Movement of Small Farmers (MPA) and Via Campesina.

The accusations range from the MST links with First Command of the Capital (PCC) [Ed. a large urban gang] to the presence of foreigners camped next to offer military training in rural guerrilla warfare, "with the goal of creating a zone of control, control through the territorial domain, where MST would replace the state."

The Staff of the Military Police of Rio Grande do Sul, at the request of the then Deputy Commander General of the Military Brigade Cel. Paulo Roberto Mendes Rodrigues, authorized to conduct investigations based on various actions taken by the MST in time.

To Giane Alvares, a lawyer from the MST, the existence of this process is part of the context of criminalization of the movement in the state of Rio Grande do Sul. 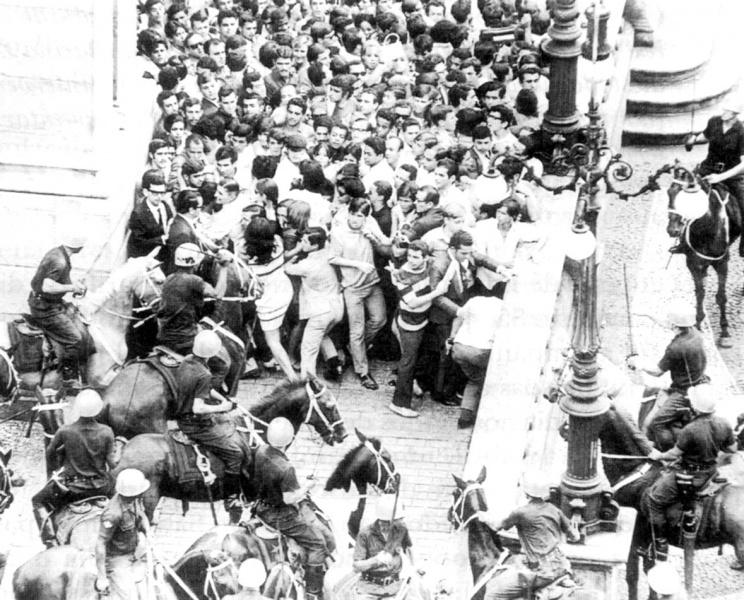 "This is a fairly typical case regarding the forms of criminality that the MST suffers throughout its existence. These workers were charged based on the National Security Act, a law widely criticized by various jurists of all hues, who consider it one of the legacies of the military dictatorship. The workers were accused of endangering the democratic rule of law, which is an authoritative and mistaken view, linked to the decisions in the “anos de chumbo” [Ed. literally, the “years of lead,” refers to the most repressive period of the military dictatorship, 1968-74] in Brazil," says Giane.

Although the process that has been going on since 2006, generated, without individualized proof, warrants for preventive arrests of those involved, Giane believes that this was an important victory for the Movement and democracy.

"This was a file containing the arguments for the existence of the theory of the Domain of Fact, that is, as there was no evidence, some leaders were charged with the responsibility for practice of some crimes that prosecutors claimed had occurred," she explains.

In the sentence, recognizing the innocence of the accused, the judge declared that the National Security Act - widely used in the criminalization of social movements in Brazil - is incompatible with the current Federal Constitution.

The lawyer also cited the importance of social mobilization in the fight against injustice and against the act of making the people's struggle a crime.

"This was a process that involved the activities of lawyers of the National Network of People's Lawyers (Renap) and jurist Nilo Batista, but much more needs to be done so that such illegalities not happen again," she concludes.