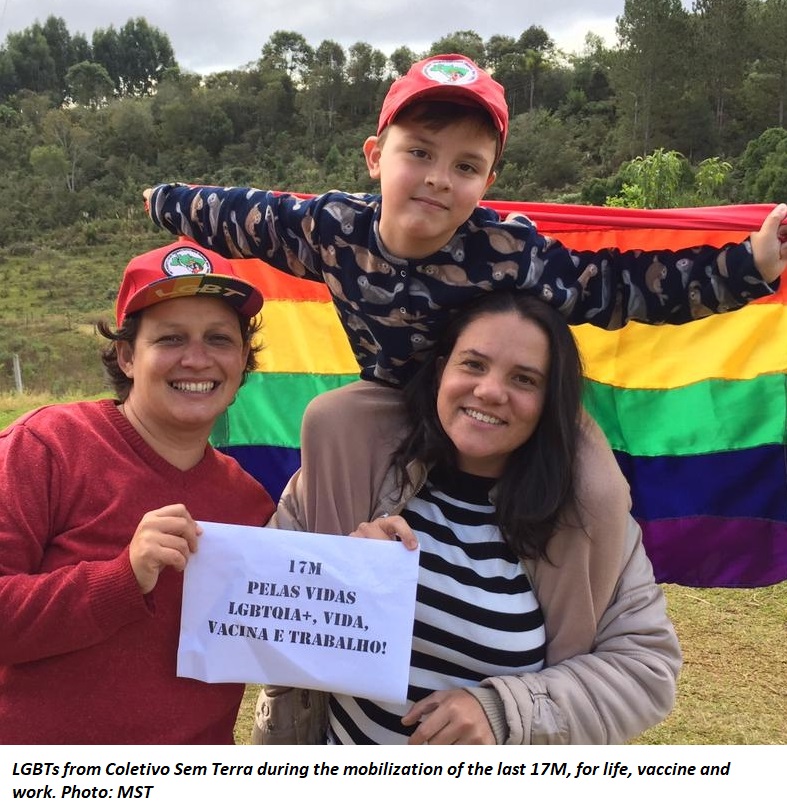 June is Pride Month for lesbians, gays, bisexuals, transvestites, transsexuals, queer and intersex and others (LGBTQI +), but in today's Brazil there is not much that celebrates these data regarding the rights and guarantee of life for this public, due to the federal government's death policy that has promoted a dismantling of public policies for this social group. In addition, the President of the Republic of Brazil himself constantly attacks the LGBTQI + community, symbolically in his speeches, by disseminating and reinforcing prejudices and encouraging physical violence against LGBTQI + people.

Given this, a fact acquires even greater importance for the LGBTQI + community in the struggle to guarantee life and basic rights, such as the right to social name recognition, health care, among others. This also makes the unity of popular movements and associations around common agendas on the rights of these populations urgent and fundamental.

LGBTQI + Pride Month was created to celebrate diversity and give visibility to demands for rights. The date is marked by the episode known as the Stonewall Revolt. The event occurred on June 28, 1969, when US police invaded the Stonewall bar in New York to repress the LGBT public, who used the place as a meeting point for the LGBT population. That day, people in the bar resisted the police force, lighting the fuse for an uprising in favor of community rights and turning the month of June into a historic landmark. 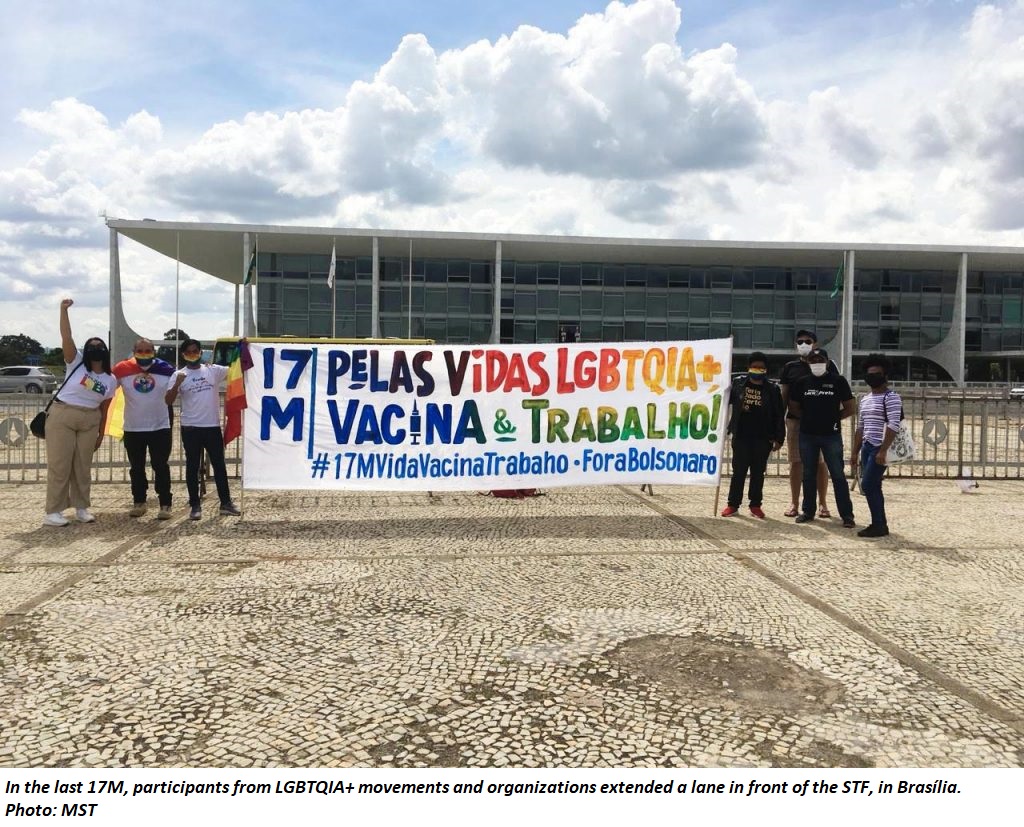 Over the years, the MST has been holding debates on sexual and gender diversity, in addition to creating the Collective LGBT Sem Terra, which seeks to involve the entire social base in the debate and overcoming prejudices that still persist in society, and to advance in participation and fights for the rights of LGBT people.

The state leader of the Landless LGBT Collective in Ceará, the Landless LGBT Irineuda Monte Lopes, explains that in the current scenario in the country, with a misogynist and homophobic government, which attacks the LGBTQI+ community in various ways, the date of the month of June is symbolic for Landless LGBT people.

“Although we, as a collective, have only been in existence for six years, the date is symbolic in terms of visibility and construction within the MST. Today we are LGBT Landless, and this has a sense not only of symbol, but beyond the Landless identity. We are also LGBT, our closets were opened and today we do not need to hide our identity to act in the struggle for land and for Agrarian Reform,” she points out. 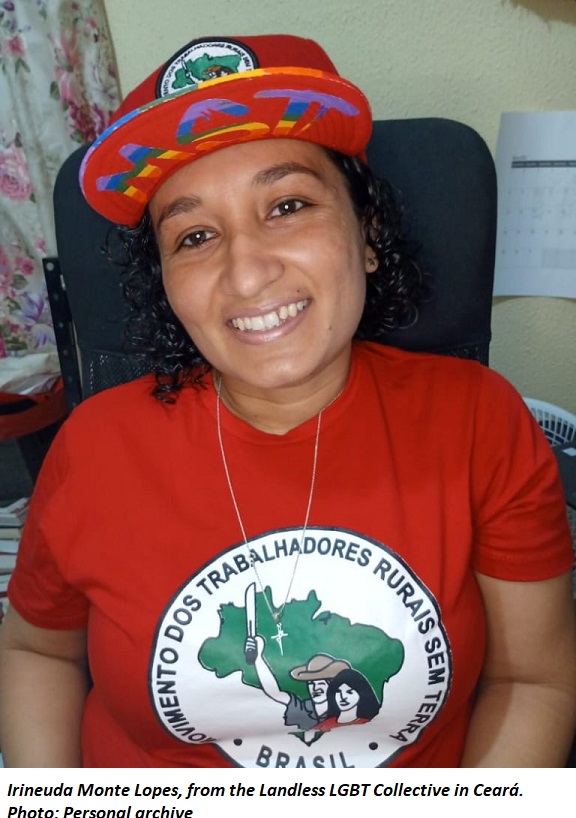 Irineuda is 36 years old and lives in Fortaleza/CE. She has participated in the MST since she was a child, when she was four years old and her family went to participate in the first MST occupation in the state. The occupation took place in 1989, on the Reunidas de São Joaquim farm in the municipality of Madalena, which today houses the 25 de Maio settlement.

Fight for the right to exist

According to Irineuda, on this date, the Collective LGBT Sem Terra commemorates its construction, as it is part of the organizational structure of the MST, becoming an important instance of debate on sexual and gender diversity that has added many fruits to the Popular Agrarian Reform program. However, it is necessary to continue fighting in society for the right to exist.

“Among our main demands, the first is to exist, since we are talking about the country that kills the most LGBT people; along with this agenda of existence and resistance, we ask for justice and that the murderers who take the lives of so many LGBTs be punished,” she defends.

Data from the National Association of Transvestites and Transsexuals (ANTRA) from last year show that the new Coronavirus pandemic has drastically impacted the lives of LGBTI people. Preliminary figures reveal that 94.8% of the transsexual population claims to have suffered some type of violence motivated by discrimination due to their gender identity. When asked about their main needs, the right to employment and income appears with 87.3%, followed by access to health, education, security and housing. In addition, 58.6% declared to belong to the risk group for Covid-19.

In this context, the LGBT Sem Terra Thaisson Rodriguês de Campos, who participates in the state coordination of the Collective LGBT Sem Terra in Paraná and is coordinator of the base nucleus, points out that in addition to the general guidelines of the Collective LGBT Sem Terra and the various visibility actions of the LGBTQIA+ community, held throughout the country throughout the month of June, this is also a time to pay tribute and demand justice for the murder of LGBT Landless Lindolfo Kosmaski, which took place on May 1st this year in Paraná.

“The demands that mark this date for us at the Collective LGBT Sem Terra, in addition to the general agendas, recall the memory of Lindolfo, who was a militant, gay, teacher, and was brutally murdered. On the 28th, actions will take place throughout Brazil to plant trees in memory of Lindolfo and also in memory of other LGBTs, who were also murdered by the violence of the capital and the large estates”, he denounces. 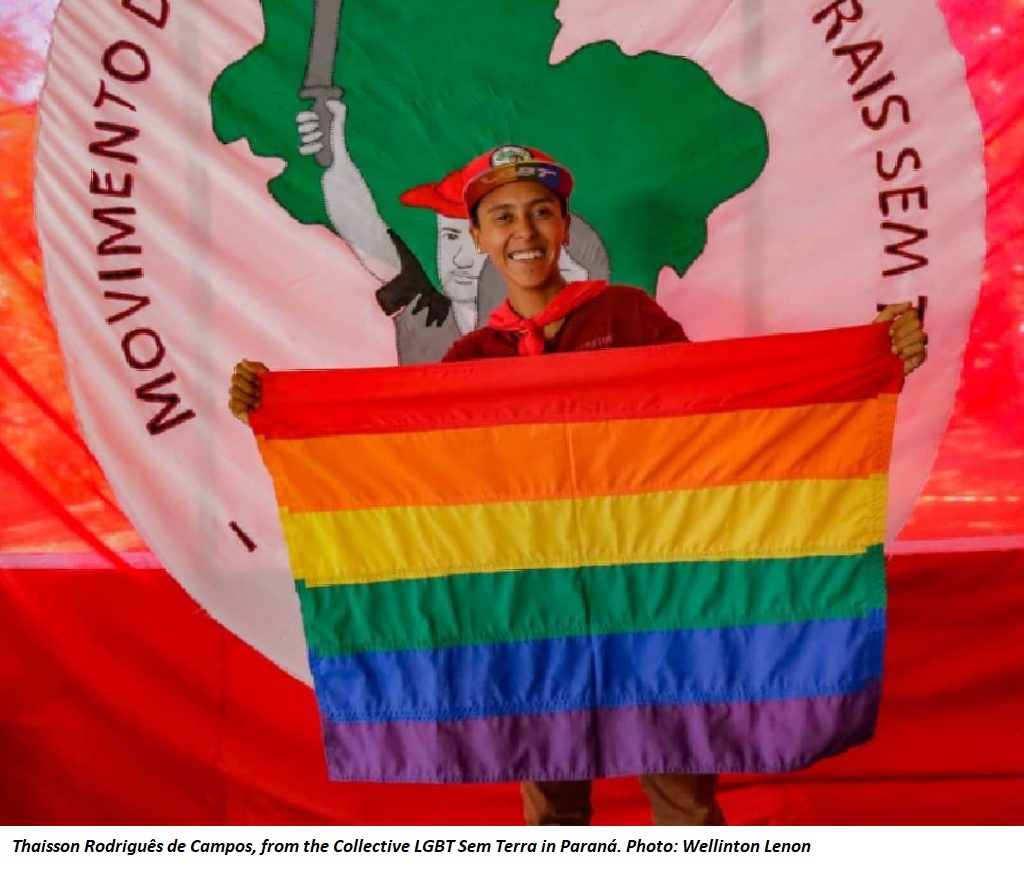 Thaisson is 24 years old and lives at the Maila Sabrina Camp, in the city of Ortigueira/PR, where he participates in the coordination of one of the camp's base nuclei. He recognizes himself as a transsexual, black and is an undergraduate student in social and human sciences at the Federal University of Fronteira Sul (UFFS). He started his militancy in the MST eight years ago, in 2013, when he arrived at the Maila Sabrina Camp and joined the camp's production sector, participated in the MST training sector and now also integrates the Youth Collective, in addition to the LGBT Collective Landless in the state.

Advances of the Landless LGBT Collective

Regarding the debates and actions of the Collective LGBT Sem Terra in the MST, Irineuda points out some advances in the construction of the collective, by reaffirming the diversity present in the countryside and enabling training for a more qualified performance.

“Over these years we have had some advances, the construction of the national LGBT Collective and also in the states, and in the state directions there is always at least one LGBT member. Another advance is the training courses for LGBTs, which enable our training and performance in a more qualified way inside and outside the MST. We still have the construction of the Via Campesina Brasil LGBT Collective as an advance,” she reports.

For Thaisson, it is important to emphasize that reflections on the LGBT issue in the MST are under construction, as they make it possible to combine the struggle for Agrarian Reform with a look at the integrality of the human being, considering sexual, gender and affective diversity. “This is already a step forward, giving visibility to the life of the Landless LGBT within the MST. Reception and advancement is also formative of the movement as a whole when it takes on this debate. It is an agenda that also concerns the Popular Agrarian Reform, because it concerns the relations of a territory, human relations, the projection of a new society, free from oppression and discrimination.”

Thaisson points out that the debate on LGBT subjects in the MST has also been important to advance the fight against women against patriarchy, which also refers to LGBT subjects, reinforcing the unification of these subjects in the fight against patriarchy and LGBTphobia. In addition to establishing new relationships with other LGBT movements and organizations in the progressive camp.

Thaisson also says that for him it has been important to participate in the Collective LGBT Sem Terra due to his personal evolution and empowerment as a transsexual subject. "We are advancing more and more, understanding ourselves and with its particularities, I identify myself as a transsexual subject of struggle, building our visibility, facing prejudice, transphobia, LGBTphobia and racism."

He reports that he still faces difficulties regarding his gender identity, but continues to fight for recognition and the right to exercise his chosen identity, to position himself as a subject in society. "There have been difficult moments in relation to my gender identity, but over time we face this prejudice, this violence that patriarchy itself brings us, understanding that every day is a day of struggle and we want to be happy, we want to laugh and cry, we love without borders, we are human and resistance strengthens us,” argues the LGBT.

LGBT Sem Terra Irineuda also emphasizes that it has already suffered prejudice due to its lesbian identity, but that today it considers itself a person under permanent construction, and points out the importance of the spaces of the Collective LGBT Sem Terra to advance the debate on diversity and seek solutions for challenges and violence, which still remain in society.

“Our challenges are to build a culture of respect for all forms of love, which is why training in our territories is necessary. Another permanent challenge is in our spaces not to accept and punish any form of violence against LGBTs,” concludes the LGBT from Ceará.