Inform, educate and organize the people’s struggle in Brazil 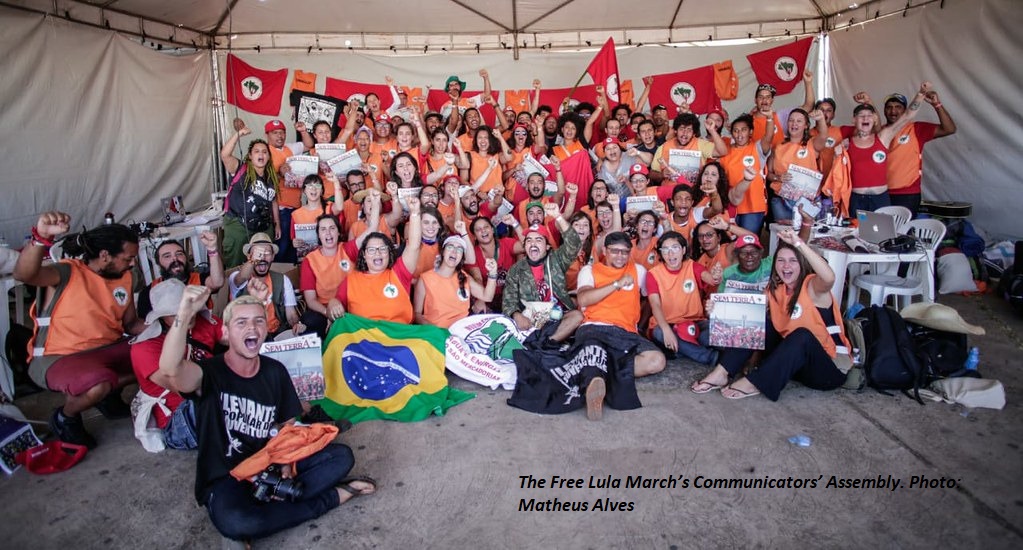 When we speak of the media at the MST, we are talking about a struggle, the people’s resistance, organizing, educating, raising awareness, as well as democracy. What may seem like a “cliche” materializes through experience and the historical challenges the Movement has faced over its 36 year existence. Among them, defending the democratization of the means of communication, as a necessary condition for enacting true social transformation.

Upon completing 20 years of participation in the Movement, the MST’s Communications Sector, comprised of and organized by landless rural workers, is a political instrument stemming from past causes. At first we are reminded of the creation of the Landless Bulletin, in 1981, which later on in 1984, became the Landless Newspaper, which turns 39 this year.

Secondly, the memory of the first radio initiatives in encampments and the construction of our own space within Radio Aparecida between 87 and 88. The radio station is headquartered in Aparecida, in the state of São Paulo, and belongs to the Aparecida Communications Network, which also sponsors POP FM and TV. At that time, occupying this space was an important achievement, giving voice to the struggle for land reform and projecting ways in which to have a dialogue with society.

Following the creation of the MST, the Landless Communication wing constructs other outlets and organizes efforts in different areas, like the Landless Magazine, the first public relations campaigns, an online presence through the MST Website (www.mst.org.br), social media accounts, organized audiovisual production through the creation of the Eduardo Coutinho Audiovisual Brigade (BAEC), and more recently, in the elaboration and planning of debates surrounding technology and information security.

Understanding this historical process,  which presented us with significant achievements in the construction of the Landless Communication System, based on the media of the masses, helps us understand the process of organizing the fight for the democratization of the means of communication.

A little bit of history

The democratization of the media is necessary and urgent. Five families control half of the 50 highest rated media vehicles in Brazil. This is the conclusion reached by the Media Ownership Monitor (MOM) study, financed by the German government, in conjunction with the Brazilian NGO Intervozes (https://intervozes.org.br/), and Reporters Without Borders (RSF) (https://rsf.org/pt), based in France.
Control of these media conglomerates in Brazil rests with the ruling class, which uses them to advance their own political and economic interests.

Different social movements such as the MST, seeking to build up alternative media, is not a recent phenomenon. Twenty to thirty years ago, groups that resisted the military dictatorship installed in the country in 1964, were fighting for the democratization of the media, media education and community media, all part of the same political uprising that created the MST and the first peasants’ struggles.

The hegemonic media had a central role in the military coup of 1964. With direct support from the United States, the bourgeois media fomented a climate of fear of the “communist threat” during the João Goulart government. With the coup d’etat consummated, this media remained relevant, and was used by the military to forge the nation’s conservative ideals. The Globo network is born during this period with two very clear objectives: keeping the military in power, and making sure Brazil was subservient to the United States.

In that same era, faced with a military coup, the first struggles for the democratization of the media begin, stemming from unionized journalism, and gaining force in Brazilian politics, with the objective of mobilizing the working class that sought change and acknowledgment from the public sphere. These forces, would make evident the connection between the necessity for a plurality of voices while formulating effective political resistance to a dictatorship, and the indispensable basis upon which to ponder Brazilian democracy.

More recently, a series of conferences that sought to discuss the democratization of the means of communication, through the demands and postulations of social movements, were successful during the Lula government (2003-2010). This administration, in theory, was open to dialogue with these social movements. Brazil has had more than one hundred conferences of this kind, seventy of them during the Lula years.

The steps forward taken starting in 2003 were cut short with the coup against Dilma Rousseff in 2016. In that moment, the most conservative sectors of the Brazilian elite, counted on the fundamental support from the bourgeois media to construct and consolidate the power grab, just as it was in 1964. A consequence of this process, the Bolsonaro government, beyond constantly attacking press freedom, utilizes public instruments, established via prolonged social struggle (like the EBC – The Brazilian Communications Company), as propaganda tools for his far-right world view.

By representing and affront to democracy, Bolsonaro also represents a danger to press freedom, freedom of expression and the possibility of free, open, mass media.

At the “1st National Communications Seminary: the MST and the battle for ideas”, which took place in February 2019, at the Florestan Fernandes National School (ENFF), the MST highlighted, as the summary of their communications strategy, three main objectives: inform, educate and organize.

Such outline is a rekindling of the legacy of the Russian Revolution. Nadeja Krupskaia, a Bolshevik revolutionary of the time, affirmed that socialist pedagogy had exactly, these three objectives in mind. Lenin, another Bolshevik revolutionary, pointed to propaganda and agitation as a weapon to reeducate the masses, mobilizing.

Landless Communication, by drawing from these sources and taking on the role of an educational tool, as well as one of agitation and propaganda, positions itself as an instrument of information, education and organization.

This Communication strategy, built upon the struggle against large agricultural estates, also takes upon itself the responsibility of constructing mass Land Reform, for it understands that the enemy articulates itself from the countryside, the same entities controlling the means of communication.