How 800 Families Could Be Pushed Out by a Bolsonaro-U.S. Base Deal in Brazil 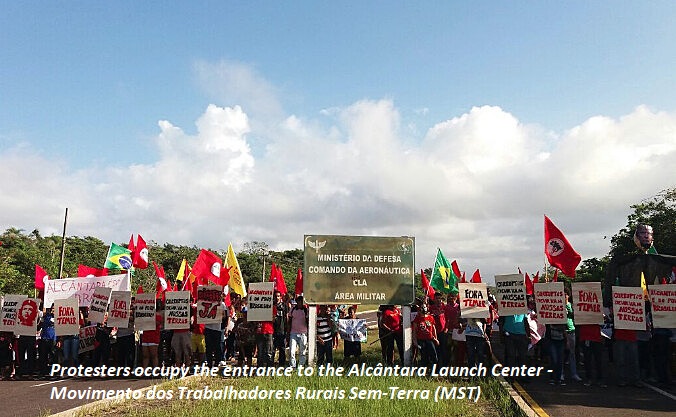 Antonio Marcos Diniz was only 13 years old when his family was forced to leave their home near Brazil’s Atlantic coast in 1983. Along with 311 other families, they had to move 60 kilometers west to Agrovila Peru so that the government could build the Alcântara Launch Center (CLA), in Maranhão, in northeastern Brazil. Today, at the age of 50, Diniz’s life may again be turned upside down by the expansion of the same launch center.

The Movement of People Affected by the Launch Base (MABE) estimates that about 800 quilombola families, such as that of Diniz, will be expelled if the expansion of the base takes place. (The term quilombola refers to descendants of African and Afro-Brazilian people who escaped from slave plantations.)

The Alcântara base has one of the most strategic locations in the world for launching satellites. It was built in 1983 in the state of Maranhão, which has the second-worst Municipal Human Development Index in the country. One of the reasons for choosing the location is the proximity to the equator, which allows savings of up to 30 percent in fuel.

In March 2019, an agreement between the governments of Brazil and the United States provided for the expansion of the base and authorized U.S. “launches from a Brazilian spaceport” while opening doors for further “aerospace cooperation between the two nations,” according to SpaceNews.

The U.S.-Brazil Technology Safeguards Agreement limits foreign use of the base “for peaceful purposes.” However, according to an article written in Brasil de Fato by Brazilian diplomat Samuel Pinheiro Guimarães, Alcântara’s location is “ideal for the United States from the angle of its political-military operations in South America and Africa and of its global strategy, in confrontation with Russia and China.”

The United States intends to use the CLA—operated by the Brazilian Air Force—by 2021. Guimarães further states that the U.S. has sufficient rocket launch bases, so the main objective of the agreement for the United States is to “exercise their sovereignty, outside the scope of the laws and surveillance of Brazilian authorities.”

Before Brazil abolished slavery in 1888, slave ships brought enslaved people from Africa to Brazil’s sugar and coffee plantations. Those who escaped these plantations formed secret and independent communities, which led to the establishment of the quilombo settlements. Such settlements are currently being uprooted to build and expand the CLA. The quilombolas, who are the residents of these settlements, are not migrants: they are refugees in their own land.

Agrovila Peru, where Diniz now works as a peasant farmer, is not part of the initial plan for expanding the base. If this plan is allowed to be implemented, the entire makeup of the region will be affected. The fish he eats, for example, comes from neighboring quilombola communities on the edge of the Atlantic Ocean, which are the target of imminent removal. The cassava he plants, likewise, is sold to the quilombolas who occupy the coast on the other side of the base.

One of these neighboring communities is Canelatiua, which is home to Neta Serejo. She was one of the founders of MABE in 1999.

“We cannot trust the United States. We know what happens when they decide to enter another country,” says Serejo. Brazil was one of six countries in South America that had military dictatorships supported by the United States in the second half of the 20th century.

The foreign policy of Brazilian President Jair Bolsonaro has been criticized for its submission to and alignment with Donald Trump and the U.S. government. In an interview with Brasil de Fato, former Foreign Minister Celso Amorim says that the armed forces are more subordinate to the United States and the government today than during the military dictatorship (1964-1985). Meanwhile, the Technology Safeguards Agreement has also found support with the Alcântara municipal government and the Maranhão state government. The argument used by both is that the agreement will add to the prospect of economic development in the region. However, MABE asserts that the quilombolas never had access to research or official documents that prove the expansion of the base or its use by the United States will generate income for the current residents.

The removal of quilombolas from Alcântara, for now, has been suspended by an injunction since May 2020. But Danilo Serejo, MABE’s legal adviser, says the decision can be reversed at any time—even if the 1988 Constitution guarantees quilombola communities the right to own their land.

The two arguments for suspending evictions were the coronavirus pandemic and the need for a “prior, free and informed consultation process of the affected communities.” Such consultation is provided for in the International Labour Organization Convention 169.

Danilo Serejo adds that this prerogative has already been violated: “Prior consent means it should be guaranteed before the agreement with the United States, and not afterward.”

Residents around the Alcântara base describe the struggle to stay in the territory as “a battle between David and Goliath.” Quilombola families depend on agriculture and fishing for subsistence, and most of them receive social security benefits, which are their main source of income. Their houses are simple, improvised, and could be destroyed in a single day. On the other side is the largest economic power on the planet, with a carte blanche from the Brazilian government.

“It is not only Alcântara that is at risk, but the whole country’s sovereignty,” says Diniz.

The market for satellites and rockets generates $550 million per year. About 80 percent of space equipment has some component produced in North America.

The threat to sovereignty lies precisely in the lack of transparency about the agreement and the expansion project. Diniz considers this gap to be revealing: if quilombolas were seen by both governments as people of rights, they would be “deserving” of this information, he says. It does not seem to be the case. According to Diniz, they haven’t been offered the chance to give input on the project, and yet they are expected to accept whatever has been decided on the “top floor,” with no say on decisions that significantly affect their lives—the same condition their ancestors were subjected to for 300 years.

Danilo Serejo adds that the Brazilian government is racist and has no respect for descendants of slaves. In 2017, Bolsonaro declared that he visited a quilombo and “they do nothing,” adding that he didn’t think they were any “better for breeding.”

The governments of Brazil and the United States have never commented on the possibility of removing the quilombolas families as a result of the expansion of the Alcântara base. Neta Serejo says MABE will keep the struggle alive “in all possible instances” to ensure the quilombolas continue to live in their territory.

This article was produced by Globetrotter. Daniel Giovanaz is a journalist and has a master’s in history from the Federal University of Santa Catarina (UFSC). He covered the 2019 Bolivian elections and is a Globetrotter/Peoples Dispatch fellow.