On April 17, members of the Friends of the MST (FMST) and Family Farm Defenders (FFD), a ​ 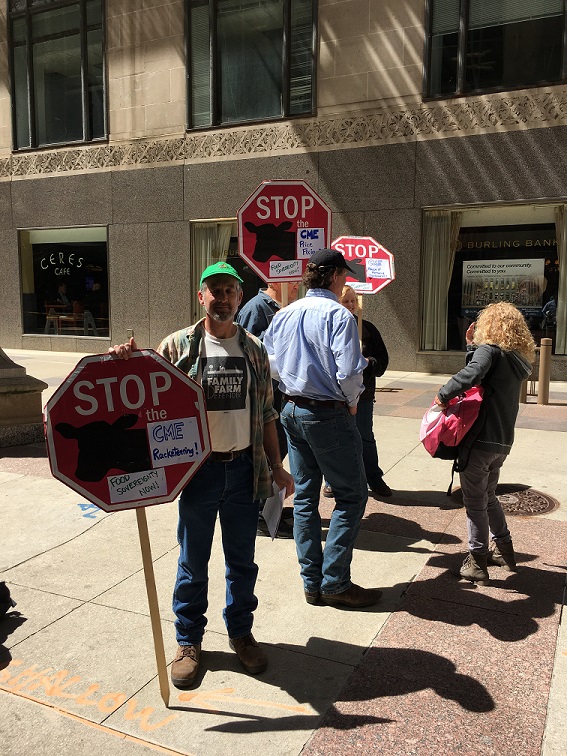 Wisconsin based organization, commemorated the International Day of Peasant Struggle by holding two protests in Chicago: the first protest was at the Chicago Mercantile Exchange (CME) where the price fixing of agricultural products is centered. As the dominant commodity trading platform, the CME determines farmgate prices that ultimately dictate the fate of people across the planet.  Without effective government oversight, this “thin market” is easily manipulated by agribusiness giants, which is why FFD will be holding a speak out against the CME’s complicity in bankrupting family farmers and price gouging consumers.

The second protest shined a spotlight on another little known perpetrator of injustice in our food/farm system – namely TIAA, one of the world’s largest pension fund managers.  Given their vast investment clout, TIAA is now the second largest landowner in the U.S. and is pursuing other speculative landgrabbing from Brazil to Australia.  This callous “profit over people” strategy, however, is causing massive deforestation, aggravating climate change, and driving small farmers off their land.   On Thurs. April 20th a coalition of environmental, human rights, labor, and farm organizations delivered over 100,000 signatures to the head office of TIAA in New York City, calling on them to adopt a more responsible investment policy that does not entail destroying forests and evicting farmers. Click here for a related article on Amazon speculation on this website.

The International Day of Peasant Struggle commemorates the Massacre of Eldorado dos Carajús, where in 1996 in the state of Pará, 21 landless workers were killed by gunfire from military police during a march on the state capital. Now, 21 years later, no one has served any prison time for these crimes.