Fighting Poverty Through Agrarian Reform and Developing the Settlements 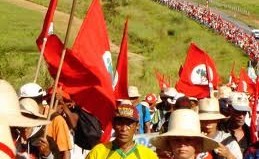 An additional survey from the National Household Sample Survey (PNAD) suggests that food insecurity is higher in rural than in urban areas.

While 6.2% and 4.6% of households in urban areas had moderate or severe levels of food insecurity, respectively, in rural areas the figures were 8.6% and 7%.

The survey was released last week by the IBGE (Brazilian Institute of Geography and Statistics).
After the election, the president-elect Dilma Rousseff (PT) made it a central goal of her government to end poverty in Brazil.

How can the government fight poverty Dilma? For José Batista de Oliveira of the MST National Coordination, the answer is the realization of a massive process of agrarian reform.

"If there's a political decision to resolve social problems, land reform has to be one of them, directly or indirectly, settling families and developing small scale agribusiness, technical assistance and credits for families who want to work the land," advocates Batista

In this interview with Pagina do MST, Batista takes stock of the Lula government and presents a set of measures to be implemented by the President-elect to advance land reform to combat poverty in the country.

How do you analyze the experiences of agrarian reform?

The Lula government did not have a program, a structured project of Agrarian Reform. There was, early in his administration, a proposal, a plan, a draft implementation of agrarian reform. This plan was not fulfilled, lost in the middle of the road. The government assumed goals, which were not fulfilled. As there was much dialogue with the Movement and that government and open discussion, we were penalized at various times. In the second term, even as he had a plan, we had a discussion with the government on some important actions. Some were commitments that the government had taken with respect to our march for agrarian reform in 2005.

The majority of the settlements publicized were in the Amazon. But most occupations occurred in the South and Northeast. Why did this happen?

This is already a consequence of not having a structured plan with respect to land reform. Not having a plan, goals and numbers to meet, we used the old way. We are not opposed to land tenure, but this is not a realization of agrarian reform. And not even the second commitment, which was the settlement of families camped out, has been fulfilled. Now, of the families in encampments, most are in Northeast Brazil, other parts of the Southeast, South and Midwest. When making land use regularization - or settlement, as they call it - only in the Amazon region, were they neither

in compliance with the guidance of a strategy or plan for land reform or settling all the families in the encampments. The government has the name and address and are in all states where the movement is organized and concentrated, mostly in the Northeast. The statistical concentration in the Amazon is the consequence of not fulfilling their commitments by the government.

How do you evaluate the process of Land Registration and Regularization in the Amazon?

It does not help in carrying out agrarian reform. That is, solely land registration and regularization is an action that does not generate a settlement for the families who are camped. It is a government action to justify a solution to the problem of Agrarian Reform. This is a discussion that the companions of the Amazon are doing, but we run the risk of legalizing the illegal occupation, especially after it was created by decree of settlement of up to a specified size.

What the government could have done to expropriate more land?

It was enough to respect the Constitution and, for example, upgrade the productivity indexes. These mechanisms are available. Another mechanism, according to the Federal Constitution provides that all areas that do not fulfill their social function are inappropriate. For example, areas that have slave labor, areas that do not comply with environmental laws. In this case, is the majority of properties in Brazil, which should be allocated for the implementation of land reform. Furthermore, there should be at least the allocation of public lands, which exist in all states of Brazil. There are public lands belonging to the Union [an independent division of the federal government] or to federal or state governments, which must also be aimed at land reform. Creating a mechanism for allocation of such land for land reform is a necessity. That would be a measure of land to raise families camped to solve this problem.

What role INCRA has played in the last period?

INCRA is an important organ in the implementation of land reform and for which it exists. Now, it is unable to even conform to these requirements, INCRA failed to fulfill the very role that would have assumed the promises of the government or the state and streamline the process of agrarian reform. INCRA, for example, continues with little verification of the units of unused land, for allocation to the settlements. It continues to be limited by lack of budget. That is, today we have many areas, that INCRA itself says are ready to be assigned for settlement and it has no budget allocated for those areas of encampments. So, INCRA remains limited.

What have the government and social movements put forward for the expansion of agribusiness?

It was combated alleviated by the movement. For the government, agribusiness was  appreciated. They had a program based on large investments and federal government resources for agribusiness. From the standpoint of budget, there was an incentive, including the agricultural industry of big business, to solve the problems of monoculture production, financed by the Bank of Brazil and BNDES [Brazilian Development Bank] and public banks in other states.

Agribusiness had no budget problem, had no problem financing and had no problem with the state bureaucracy, namely the Ministry of Agriculture. The banks have ensured its funding. Thus, agribusiness released the highest production numbers, millions of agribusiness products being that, almost 100 billion is public funding or loans of public money. They annually renegotiate their accumulated debts.

The Brazilian state and the Brazilian government have many ways to subsidize and guarantee credit for developing the agribusiness projects.

What is the solution to resolve the agrarian problems?

There is a need to maintain a political decision to resolve social problems, that is the case with the current government, which placed its priority on resolving social problems in Brazil. The new government is putting a priority to remove the people from poverty and land reform has to come in as one of the main actions.

If you have a political decision to resolve social problems, land reform has to be one of them, directly or indirectly, building families and developing small scale agribusiness, technical assistance and credit for families who want to work the land, that are committed, which is the case of settlement families today, to preserve the environment, to resolve today’s global and worldwide structural problem.

Food production that today, of the few programs that this government has created or fostered, programs such as BNDES and Conab, makes products produced by family farmers and settlements that reach the needy and the general population.

What current policies would you highlight as important and should be strengthened?

In the case, today we are taking the opportunity to supply 30% of school lunches. Public policies that already exist as our struggle for housing, implementing a program specific to housing in the countryside and to look after all the settlement families too, now and in the future. Those social programs to guarantee purchase of products and the distribution of those products to the needy, the church.

And with the provision of school lunches, we would be advancing a structural proposal for the Brazilian countryside, including solving the problems that exist there today of land concentration, the concentration of income in rural areas by generating jobs and more, and the production of products with poisons. We have only advanced in this last period the amount of poison consumed by Brazilian agriculture, more than one billion liters.

Given the goal of the new government to solve social problems, land reform necessarily is included, needs to have measures like a structured program, structured proposals to solve the social problems of the encamped families and the people who will be benefited by Agrarian Reform. For that there needs to be the political will and concrete action.

The government must create the conditions, either for INCRA or bodies responsible for land reform, to advance and have no budget problem, no credit problem.

We must solve problem of household debt. There has to be a structuring of INCRA and the Ministries responsible for land reform, which must fulfill the commitments that the government took over. You need political will and measure structured so you can make land reform.

Because the occupation numbers fell during the second term?

In the first Lula administration, there was a lot of families camped out, because it created expectations that the government would make agrarian reform. Because, historically, this was a promise. In the second administration, there was a decline because many people have given up the encampments. There are people who have been in the encampments out since the beginning of the Lula government.

Have the compensatory policies helped that demobilization?

No, because you have policies - say compensation - as an emergency measure, as well as encampment families receiving the food baskets. In addition, families also analyze the situation. The main problem is that there wasn’t a program to solve the structural problems of these families. It would be nice if all the families had been settled, which is not reality.

We recognize that in some fields we can go ahead and puncture a few blocks. For example, we did not have a government oriented to not to talk with the movements. We have no problem with dialogue. What were not advanced were concrete commitments, which were not consolidated. There was no repression directed by the federal government, although repression occurred.