Brazil: swift and robust response to the insurrection highlights the strength of democracy

Despite the chaos promoted by Bolsonarists, the Brazilian response was given by the demonstrations and institutions 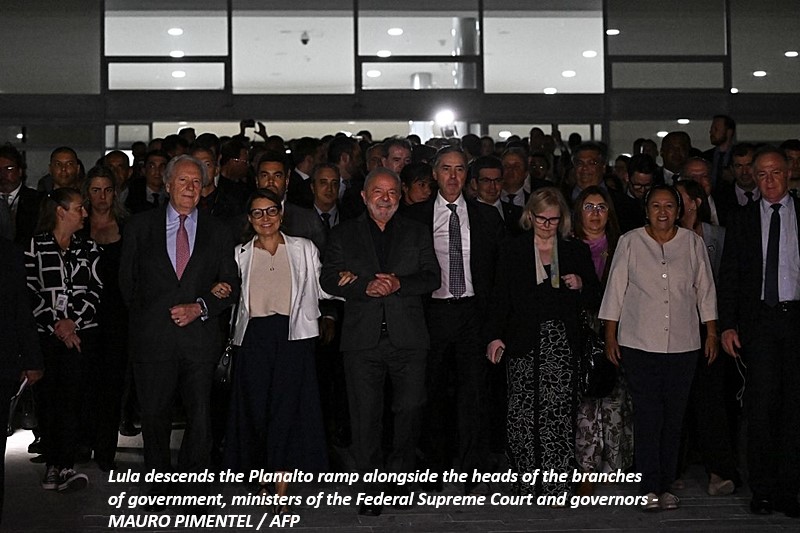 Brazil’s state institutions, including the recently installed government of Luiz Inácio “Lula” da Silva, have reacted swiftly in the wake of the riots in Brasilia last weekend. Hundreds of rioters have already been arrested and the state governor of the federal district has been suspended for his sluggish and ineffective response.

Thousands of supporters of the ousted right-wing former president, Jair Bolsonaro, invaded the the Plaza of the Three Powers – the heart of government in the country’s capital – on Sunday January 8. They swarmed into the presidential Planalto palace as well as the national congress and federal supreme court buildings.

Policemen and journalists covering the riot were injured and weapons were stolen from the presidential security office. The bill for damage to public buildings, works of art and colonial-era furniture is likely to run into millions of reals.

While shocking, the riot was not unforeseen like the storming of the US capitol in 2021. Academics, judges, journalists and politicians had all warned about its possibility. Much of Bolsonaro’s support base had not accepted the result of last October’s election and were openly discussing an attempt to seize back power. The US Capitol attack was repeatedly held up as a cautionary tale.

The riots had varying degrees of support from various sections of Brazil’s political right. This included from businessmen, landowners, some of the media and – in the most striking difference to the US – members of the armed forces and police.

Sections of the army appear to have been complicit. For months, anti-democratic groups have been allowed to set up camps around army barracks, which, on some occasions, have even defended the protesters against the intervention of state and municipal security forces.

The army should also have been responsible for protecting the presidential palace, but were not deployed on Sunday until the rioters had already invaded the complex.

Similarly, the military police, who are responsible for patrolling assigned areas, also appear to have been supportive of the rioters. Police officers were seen taking pictures with rioters and there were reports that the military police even escorted some of them to the Plaza of the Three Powers.

Some media organisations, journalists and commentators have been accused encouraged of defending the anti-democratic riot, notoriously the right-wing Jovem Pan and some of its contributors. But most journalists have been steadfast in their support for democracy and the rule of law.

Foreign governments expressed outrage at the violence, and members of the US congress demanded the extradition of Bolsonaro, who is currently in Florida, to Brazil. Meanwhile Brazilian and international commentators have argued that this could be the beginning of the end of Bolsonarismo, because the episode will strengthen Lula’s legitimacy and allow him to use emergency measures to shore up his position.

State institutions were swift to respond. The president issued a decree mandating federal intervention in public security in Brasilia. The number two in the justice ministry, Ricardo Cappelli, has been given responsibility for overseeing the state security.

Justice minister, Flávio Dino, told a press conference that the riot involved “acts of terror”. He said the ministry would take necessary measures to ensure the maintenance of order in the capital and said Cappelli would be given all assistance to ensure this.

Supreme court judge Alexandre de Moraes suspended the governor of Brasilia for 90 days on the grounds of “gross misconduct” during the crisis. Moraes is responsible for leading the investigation into anti-democratic acts. He also ordered the dismantling of the pro-Bolsonaro camps and roadblocks within 24 hours. Moraes argued that:

Every single responsible person will be held accountable for acts that threaten democracy, the rule of law and institutions, including wilful connivance – by action or omission.

Lula and the presidents of congress and the supreme court met early yesterday morning to discuss further measures. After the meeting, they published a note condemning the acts and stating that the three branches of government are “united so that institutional measures are taken, according to the law”.

Later, on Monday, 9, Lula assembled the presidents of the three powers and all 27 Brazilian states, including Bolsonarista-governors of DF, SP, RJ and MG. During the meeting and while visiting the sites of the attacks on the previous day, attendees advocated for the defence of democracy and the country’s institutions.

In parallel, demonstrations in favour of democracy and the rule of law and against the acts of terror of January 8 were held in several Brazilian cities and by Brazilians living abroad. Demonstrations united individuals from diverse sides of the political spectrum, and even rival associations of football fans came together in defence of the country’s young democracy.

January 8 has, if nothing else, highlighted the anti-democratic nature of Bolsonarismo. But it is possible to take a positive view of the swift and robust nature in which Brazil’s institutions reacted to this direct attack on Brazil’s constitutional order. A reaction echoed by the large majority of the Brazilian civil society.

* This article was originally published at The Conversation and was updated by the author after the demonstrations that took place in Brazil and abroad on January 9, 2023.