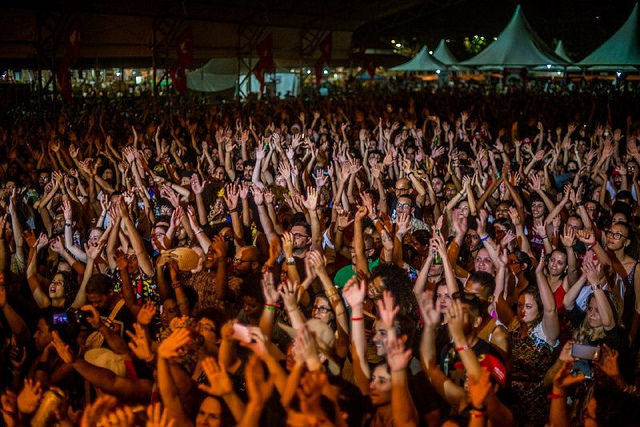 The Landless Workers’ Movement (Movimento dos Trabalhadores Rurais Sem Terra – MST) has released a report on the outcomes of the 3rd National Agrarian Reform Fair, which took place from Thursday (3) to Sunday (6) last week at the Água Branca Park, in São Paulo, Brazil.

During the four-day event, around 260,000 people visited the fair – nearly 100,000 more than the attendance of last year’s event. Producers sold 420 tons of products, including 1,530 items. At the food court dedicated to typical foods from all states of Brazil, visitors could buy 75 different types of dishes.

Bárbara Loureiro, from the MST Production Sector, said that, in addition to 1,215 farmers, a huge team was necessary to make a big event like this happen.

“Not only are farmers selling their products, but the fair is also conceived, set up, and organized by us. Around 300 people organized in many different work teams are necessary to make the fair happen. We have work teams dedicated to infrastructure, park security, cleaning, decoration – which is really pretty –, the Ciranda Infantil – a child care facility –, health facilities to care for those who are working here, including our farmers. So there is this whole separation of duties to make sure things run smoothly during the four days of event.”

Milton Fornazieri, also from the MST Production Sector, pointed out that the event achieved the goals established by the movement when it was first conceived.

“We’re entering the home stretch of our fair and we believe it has really fulfilled its purpose, with the goal we have set. We hoped the fair would be a place of conversation with São Paulo’s population and working class, and we’re really making it happen with every area of it, at the food court, the fair itself, where products are sold, and the cultural spaces throughout these four days.”

Fornazieri also said that the food products that were not sold at the fair will be donated to organizations in São Paulo.

MST national coordinator João Paulo Rodrigues said that the fair was a way for the MST to show accountability to society for its more than three decades of struggle for the right to land and healthy eating.

“More than just the numbers, the most important thing is the whole accountability process for the 34 years of struggle and achievements for the MST. We have been building these spaces of production, organization of agricultural production, cooperation. São Paulo’s response to that was beautiful. The MST people will leave very happy, because more than 260,000 people visited the fair in the last few days. That alone shows how committed São Paulo locals are to healthy eating and the defense of agrarian reform,” he said.

Rodrigues also mentioned the so-called Agrishow, an agribusiness trade fair that took place in the same week as the Agrarian Reform Fair.

“This is our answer to the Agrishow fair, taking place in [the city of] Ribeirão Preto [São Paulo state]. They've set up a trade show where there’s nothing but poison and machinery, while we've set up a fair that has production, food, and people. This allows us to make a comparison between the two models, reflecting the challenge that will take place over the following years in society.”