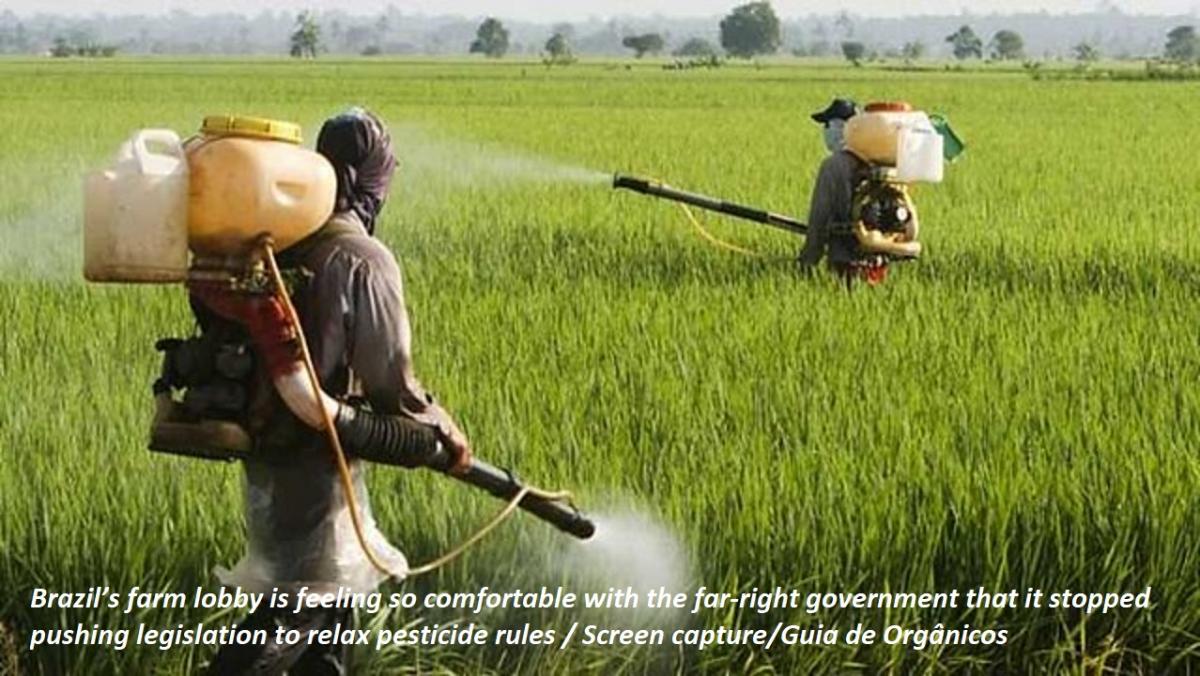 In 200 days, the Jair Bolsonaro administration has approved more new pesticides in Brazil than the European Union did in eight years.

Since January 2019, Brazil has sanctioned 239 new agrochemicals, while the EU has approved 229 since 2011, the ex-president of the Brazilian Association for Agrarian Reform (ABRA), Gerson Teixeira, wrote.

In his article “Rural elite landowners and agrochemicals – A counternarrative,” Teixeira argues that today’s scenario is so positive for the agribusiness sector that the influential farm lobby has stopped pushing the so-called Poison Bill in the country’s Congress, submitted by former senator and “soy king” Blairo Maggi.

The Poison Bill plans to make it easier to approve and market pesticides in Brazil and is pending in Congress since Jun. 2018, when a special committee voted to pass it into law. But the rural caucus stopped pressuring lawmakers to vote ever since.

“They realized that, now that they have the government in their hands, they don’t have to pass the bill. So much so that pesticides have never been approved in such a frenetic pace as now,” Teixeira said.

The slew of agrochemicals approved is about making the market more affordable for farmers, the former head of the ABRA said. “Their strategy is to offer a huge number of poisonous products and therefore lower prices, regardless of whether that will lead to more contamination of the environment or the food.”

Agrochemicals are substances produced to exterminate life – of plants, bugs, and other unwanted natural agents. This is why they are called “biocides” and can cause illnesses, researcher Cleber Folgado recently told Brasil de Fato.

Folgado, who was a member of a dedicated group to draft a national plan to reduce pesticide use in Brazil (Pronara) for the National Committee for Agroecology and Organic Production, points out that the two main forms of poisoning are acute and chronic.

Acute poisoning is when there is exposure to high levels of toxicity, with almost immediate effects: nausea, vomiting, diarrhea, allergic reactions, headaches, and dizziness. Chronic poisoning, on the other hand, is the result of long-term exposure to small amounts of pesticides that accumulate in the system over the years and can cause respiratory diseases, allergies, infertility, erectile dysfunction, miscarriages, Alzheirmer’s disease, autism, cancer, chronic kidney disease, liver damage, thyroid disease, multiple sclerosis, and Parkinson’s disease, for example.

In six months, the Bolsonaro administration has approved more pesticides than any of the years of Dilma Rousseff’s terms. During the Michel Temer government, pesticide approvals increased by more than twofold – 450 between Jan. 1 to Dec. 31, 2018. But the rates recorded under the far-right head of state reached an all-time record high.

Teixeira underscores that initiatives to stop new pesticides from being approved by the government do exist – the Workers’ Party (PT) has been trying to push legislation in that sense, for example – but the political scenario looks grim. “We know some groups in the Public Prosecutor’s Office are concerned about this, trying to do something about it, but to no avail,” he adds

The congressional farm lobby, which has been working hand in hand with the government, represents Brazil’s powerful agribusiness sector and has 257 members of parliament, including 32 senators and 225 deputies. Tereza Cristina, Bolsonaro’s Agriculture minister and spearhead of the massive pesticide approvals, was the chair of the congressional rural caucus between 2017 and 2019.