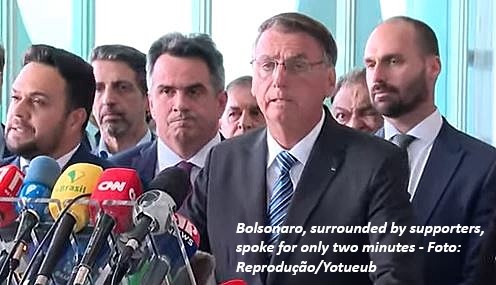 45 hours after Brazilian presidential candidate Luiz Inácio Lula da Silva (Workers' Party) declared victory in the October 30 elections, his defeated opponent, Jair Bolsonaro came out of isolation at the Planalto Palace (official workplace of the president of Brazil) to address the nation. In a two-minute speech, the defeated candidate sent mixed signals about the roadblocks carried out by his supporters and expressed gratitude for the votes he received, but did not mention Lula.

“The current popular movements are the fruit of indignation and feeling of injustice, regarding how the electoral process took place,” he said, without explaining what injustices he was referring to in the speech.

He then signaled a call for protesters to clear the roads. “Peaceful demonstrations will always be welcome, but our methods cannot be those of the left, which have always harmed the population, such as invading property and curtailing the right to come and go,” said Bolsonaro.

With a historic delay of 45 hours, the current occupant of the Planalto Palace mentioned those who voted for him. “I want to begin by thanking the 58 million Brazilians who voted for me last October 30.”

Bolsonaro pledged, even if in a coded way, to transition power to Lula. “Even facing the whole system, we overcame a pandemic and a war. I have always been labeled as undemocratic, but unlike my accusers, I have always played within the four lines of the Constitution. I have never spoken of censoring media or social networks. As President of the Republic and as a citizen, I will continue to comply with all the commandments of our Constitution.”

Finally, he repeated again the integralist motto, which characterized his administration and made him a reference for fascists around the world. “The right has truly emerged in our country. Our robust representation in Congress shows the strength of our values: God, homeland, family and freedom.”

“We have formed several leaders throughout Brazil, our dreams are more alive than ever, we are for order and progress,” Bolsonaro said, referencing the motto on Brazil's flag.

After the pronouncement, Bolsonaro fled in a hurry and without discretion.

The Minister of the Civil House, Ciro Nogueira (PP-PI), was instead the one in charge of giving information about the government transition process. “President Jair Bolsonaro authorized me to do so. When I am provoked, based on the law, we will start the transition process,” he said.