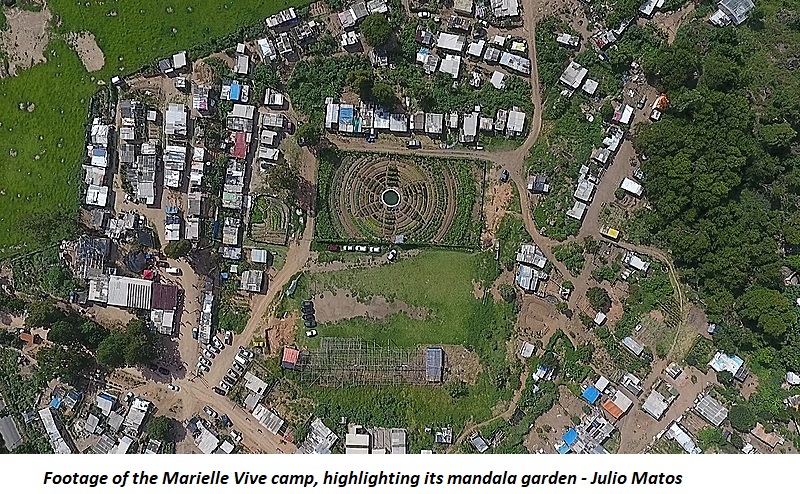 For more than two years, around 700 families from the Landless Rural Workers Movement(MST) have been transforming the idle setting of the old Eldorado Ranch, in the Valinhos municipality of the state of São Paulo, into land producing healthy, agro-ecological foods. The Marielle Vive camp was created in April 14th, 2018, a month after the murder of Rio de Janeiro city councilwoman Marielle Franco, and her driver Anderson Gomes.

Marielle Vive was also founded to exalt the life of one of its residents, bricklayer Luís Ferreira da Costa. He was brutally murdered on July 18th, 2019, while participating in a peaceful protest demanding access to water. The crime is part of a larger context of violence reported by the families in the camp, which is surrounded by luxury condominiums. The murderer of Seu Luís, Leo Luiz Ribeiro, awaits trial a free man, living near the crime scene.

From mourning, to struggling to survive, Marielle Vive faces even more challenges to maintain its existence. The 130-hectare plot of land, which today is being revived through agro-ecological principles, is in danger of being taken over by real estate speculators. Starting next year, a court order may force the eviction of the families residing there.

On the other hand, the encampment demonstrates, day by day, the strength of its project to become a legal settlement and guarantee the peoples’ right to land, as well as aid in environmental preservation and the reduction of social and economic inequalities in the region. An example is the collective mandala garden, which has 1000 square meters, as explained by Tassi Barreto, a member of the MST.

“It [the mandala garden] is fundamental for our internal organizational processes, and also for demonstrating what we want with this land through the establishment of a settlement. It contributes from the point of view of internal training, both in the aspect of agroecology, but also in the process of collective work experience, of cooperative work. And it is also a demonstration of what can be produced in this area of the ranch, which sits abandoned and at the mercy of speculative real estate capital”, analyzes Tassi.

In addition to the mandala garden, the collective kitchen provides all meals from the camp’s very first day. The garden's own production supplies the produce that is prepared daily. The work of less than three years has already recovered springs and implemented new food alternatives among the camped families. In addition to this, surplus production is donated to other families and hospitals in the region.

The feeling of belonging in the camp feeds the dreams and proposals that will enbale conquests beyond the approximately 700 families already ther. Suely Moreira, better known as Suely da Produção, is a resident of Marielle Vive. She mentions that the territory functions as a great school of agro-ecological knowledge, in partnership with organizations such as educational institutions and social movements. The defense of life is one of their political banners, and also practiced daily between people.

“Preserving the environment, learning to look at nature as our source of energy and healthy food for our little ones. This is what we are practicing here at the camp. We are learning a lot, and this is our way, I see no other way. Agroecology is a life principle”, explains Suely.

On November 2nd, 2019, the Luís Ferreira Popular School was inaugurated on site. In addition, various activities are carried out to reaffirm the union between the struggle for agrarian reform and agroecology within the camp.

Families intend to take another step towards further exercising their rights on the territory. The project to build a shed next to the community garden is in progress. The work will be done following the principles of bio-construction, an ancient technical technique, practiced by several peoples, utilizing easily accessible materials that are harmonious with nature. Furthermore, the technique follows a philosophy of environmental responsibility.

For all this to happen, Marielle Vive needs financial resources and has opened a crowdfunding campaign. The online drive intends to raise funds for the construction of a new shed, and for educational efforts into bio-construction techniques. The fundraiser and the bamboo bio-construction course are being organized by the MST, with the help of biologist and activist for causes that directly affect traditionalist peoples - Bianca Almeida - and permaculturist, bio-constructor and educator - Adriano Barbosa.