After 60 hours of resistance, MST encampment is violently evicted 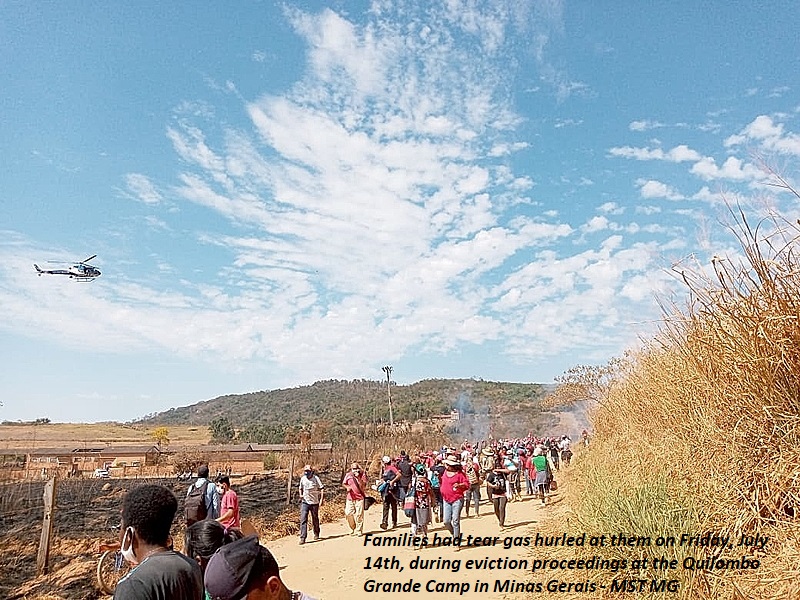 The land repossession of the Quilombo Campo Grande encampment in Minas Gerais was carried out this Friday August 14, after the Military Police committed violent actions against the families that resisted the eviction for almost 60 hours.

In the early afternoon, police shot tear gas against the members of the encampment. According to the Landless Rural Workers’ Movement (MST), the houses and crops were destroyed several hours later. The Eduardo Galeano Popular School, where children, youth and adults study, was also destroyed the day before.

The eviction was only completed three days after the process began, because of the determined resistance of the landless families who have been occupying the area for the last 22 years. Around 450 families lived in the area of the bankrupt sugar mill Ariadnópolis, which closed down activities in 1996.

After the occupation and revitalization of the land in 1998, the families had to deal with constant disputes with the owners of the bankrupt company that demanded possession of the territory.

In the two decades of living and working at Quilombo Campo Grande, the 450 families have built up substantial agroecological production. They produce the renowned Café Guaíi and are also responsible for other crops, such as corn, beans, honey, vegetables, hens, livestock, and milk. According to the MST, only in the last year, the families produced 8.5 sacks of coffee and 1,100 hectares of crops, with more than 150 kinds grown without the use of agrotoxins.

The members of the encampment said that the riot police launched tear gas and attacked the 450 families on Friday August 14, the third day of police's attempts to carry out the repossession of land order. “There is so much despair. So many people are crying, falling to the ground. They are running over us. A lot of people are injured. Children are missing,” said one of the camp’s residents.

The eviction generated widespread rejection both within Brazil and abroad, and social media campaigns were organized to pressure Minas Gerais Governor Romeu Zema to suspend the eviction. The hashtags “Zema the Coward,” “Criminal Zema” and “Save the Quilombo” were used on social media to support the families living in the Quilombo Campo Grande Camp and denounce the actions of the Military Police and the state government.

On the first day of the repossession, Zema tweeted that the action had been suspended. However, the police remained on the scene. The government affirmed that the Secretary of Social Development of the state forwarded the suspension request to the Campos Gerais Judiciary, where the encampment is located, and a local judge rejected the request.

Workers’ Party state deputy, Beatriz Cerqueira, harshly criticized the governor’s stance, stating that talks have been ongoing with Zema and military police since July to stop the eviction from taking place.

“The governor has made a political choice by letting this happen. He could have suspended it. It’s a political choice because it’s ideological. He says he is merely following police orders. That is a lie. We are in an exceptional situation and he could have taken the responsibility upon himself, or at least mediated a solution that would halt the expulsion during the pandemic, at the very least,” criticized the parliamentarian.

The campaign Zero Evictions, organized by the MST along with the Homeless Workers’ Movement (MTST) and dozens of other people’s movements, denounced the eviction to the United Nations on Thursday August 13.

The report sent by the UN special rapporteur on the right to adequate housing, Balakrishnan Rajagopal, denounced the destruction of the Eduardo Galeano Popular School and the eviction of six families on the first day of the eviction. The movements solicited the immediate suspension of the land repossession order.

The members of the Quilombo Grande encampment, who would be impacted by the eviction, live on the land of the failed sugar plantation Ariadnópolis, which stopped its activities in 1996. Once the company went under, the owners, the Azevedo Brothers Agricultural Company, decided to completely abandon their unpaid labor debts as well as the refinery and the land it sat on.

Businessman Jovane de Souza Moreira requested the eviction because is trying to restart the failed refinery and fulfill a commercial agreement with Jodil Agricultural Holdings Ltd. The owner of the aforementioned company is João Faria da Silva, one of the largest coffee producers in the country.