Social movements and organizations of rural, water and forest people launch a campaign against violence

Letter summons "the whole of society to an ongoing campaign against violence in the countryside, in defense of territories and life" 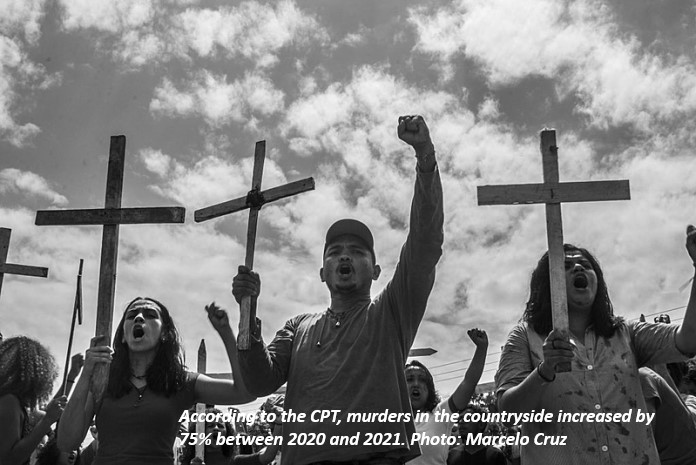 Gathered at a Seminar in Brasília between April 18 and 19, 2022, several popular organizations, social movements and entities of rural, water, forest and urban peoples discussed the organization of a unified action front against the violence that plagues these populations and launched a letter of denunciation and summons to society to join the ongoing campaign against violence in the countryside, in defense of territories and life.

In all, 33 organizations signed the letter denouncing the increase in violence in the countryside, which has become appalling during the Bolsonaro government. Data from the Pastoral Land Commission (CPT) point out that “the murders jumped from a total of 20 in 2020 to 35 in 2021, representing an increase of 75%. Among these, leaders who work in defense of Human Rights and nature stand out”, says the document.

The letter also condemns the fact that the populations most affected by violence in the countryside were the people linked to the struggle for land and water and forests: “indigenous peoples, quilombolas, riverside dwellers, squatters and landless peasants. It is important to emphasize that both the increase in violence and the number of murders took place in the Legal Amazon region, evidence of the violence inherent in the process of capital expansion”, they report.

Check out the letter in full:

CAMPAIGN AGAINST VIOLENCE IN THE COUNTRYSIDE

In defense of the peoples of the countryside, waters and forests

On April 18 and 19, 2022, several organizations of people from the countryside, water, forests and urban territories met in Brasilia to discuss a unified front of action against the violence that plagues these populations.

Between 2011 and 2015, 6737 conflicts were recorded in the countryside, involving more than 3.5 million people. In the following period, from 2016 to 2021, these numbers rose to 10,384 conflicts affecting 5.5 million people, especially children, youth and women, confirming that the impeachment of President Dilma was a coup put together by sectors of the State and capital, of the hegemonic media and in particular linked to agribusiness. Murders jumped from a total of 20 in 2020 to 35 in 2021, representing a 75% increase. Among these, leaders who work in defense of Human Rights and nature stand out. Regarding slave labor, there was an increase of 113% in the number of people rescued. It is worth remembering that these data, recorded by the CPT, are only those that were made visible in official data or the media. This means that the reality is even much harsher. These situations intensify as public and inspection policies are dismantled.

Based on CPT data, the populations that suffered the most violence in the countryside were indigenous peoples, people in quilombolas, riverside dwellers, squatters and landless peasants. It is important to emphasize that both the increase in violence and the number of murders took place in the Legal Amazon region, evidence of the violence inherent in the process of capital expansion. Land and nature, natural resources, converted into merchandise and subjected to private property and speculation, are at the origin of various forms of violence. These forms of violence are historically structured in class division, racism, and patriarchy.

This is evident when we see that businessmen, land grabbers, prospectors, ranchers, miners and loggers and the State itself are the main causes of violence, according to CPT data. It is important to point out that violence advances over territories, but also over the culture and spirituality of rural, water and forest peoples, through the advancement of fundamentalist sectors and churches that use practices of religious racism. The violence intensifies with the impunity and connivance of the State, generating an increase in militias and gunfire.

Even with the pandemic and violence, there was an increase in resistance actions. In the last period there were several land occupations, retaking of territories, mobilizations against evictions, demonstrations in large capitals and large mobilizations and campaigns against hunger and in defense of food sovereignty, in a strategy of solidarity between rural and urban peoples. We also highlight the great indigenous mobilizations across the country against setbacks.

In support of this process of struggle of peoples, confronting and overcoming violence in the countryside and defending life is a goal for the various fronts of resistance.

To this end, the entities gathered here call on the whole of society for an ongoing campaign against violence in the countryside, in defense of territories and life.

From the MST web site | Edited by Solange Engelmann | https://mst.org.br/2022/07/21/social-movements-and-organizations-of-rura...