Murders of quilombolas up by 350% in one year in Brazil

The number of quilombolas killed in Brazil skyrocketed by 350 percent in 2017 over 2016, according to a report, released on Tuesday, based on a new survey. 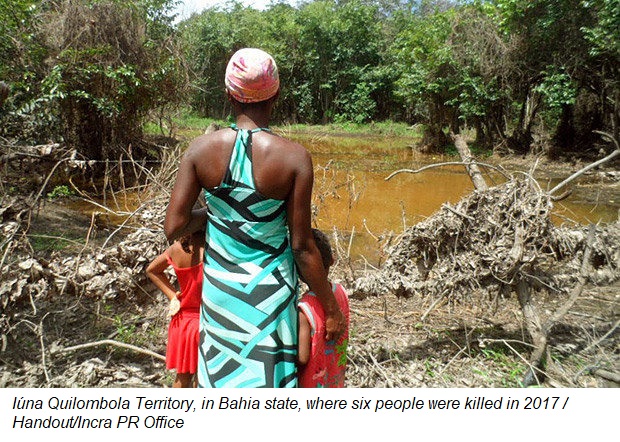 Quilombolas are residents of settlements set up in Brazil’s rural areas, mostly by escaped enslaved people of African descent. Today, they struggle to be recognized and have their identity and territories respected.

The report shows 18 quilombolas were killed in 2017, against 4 in the previous year.

A member of the survey coordination team who works for the NGO Terra de Direitos, which co-produced the report, Élida Lauris pointed out the data expose the rampant racism quilombola people experience in Brazil today. Not only that, land conflicts with big farmers and other actors with economic power who attack the communities play an important role in keeping these communities at risk.

“There are development projects that make these communities more vulnerable and are related to environmental racism, economic racism, and the lack of protection, as these communities are denied land rights,” the researcher said.

According to Brazil’s National Confederation of Rural Black Quilombola Communities (CONAQ), which also co-produced the report, there are approximately 3,200 quilombola communities officially recognized by the Brazilian state, but because of a political impasse, less than 300 of them actually have the title of the land where they live.

The survey also investigated the number of murders in previous years. Between 2008 and 2017, 32 quilombola men and 6 women were killed, 29 of which (76.3 percent) in the Northeast. The region has a long history of people’s resistance and uprising, specially in the countryside.

Regarding 2017 data, the report shows 68.4 percent of the murders reported were a result of gun violence, while 13.2 percent of the victims were killed with cold weapons.

Activist Divânia Silva, from the CONAQ coordination, says the effects of violence are devastating, because, among other things, they pose great risk to the way of life and the livelihood of the quilombola people in Brazil.

She also says the communities are concerned and apprehensive because the authorities, such as the judicial system, are not taking effective actions to tackle the problem.

“[The communities] are feeling pressured and unsafe, because the judicial system has not even been able to investigate these murders to punish the culprits. More and more, they are trying to pour oil on troubled waters or even cover up certain crimes,” Silva argues.

Gender is an issue that stands out when it comes to crime against the quilombola people. Remarkably, the survey shows women are victims of especially brutal crimes, as they are killed with knifes, fire, LP gas cylinders, and other objects.

In 66 percent of the cases reported to the authorities, women victims were killed with cold weapons or experienced some kind of torture. The rate is lower among men – 21 percent.

The researcher points out that usually the women who are murdered are political leaders, and there is a strong patriarchal element to the way they are killed.

“This level of cruelty is about perpetrating violence against their bodies, which means that all this conversation we have about making sure people have land rights so that they can have security and overcome violence is not enough when it comes to women,” she said.

The researcher added that it is necessary to formulate policies to protect women taking into account the specific reality of quilombola women.

For this purpose, and also to meet other demands regarding crime against quilombolas that the report pointed out, the organizers of the research are planning to submit the survey to different government agencies to turn it into a document to carry on the political struggle.

“This reality is exposed so we can produce effective, integral policies for the quilombola communities,” she added.

The report was also co-produced by the Association of Rural Workers of Bahia and the Legal Aid Collective Joãozinho de Mangal.