Lula criticizes Bolsonaro about basic income: “It got there quickly for bankers”

In an interview to journalists, the former head of state pointed out mistakes and paths forward for the Bolsonaro goverment 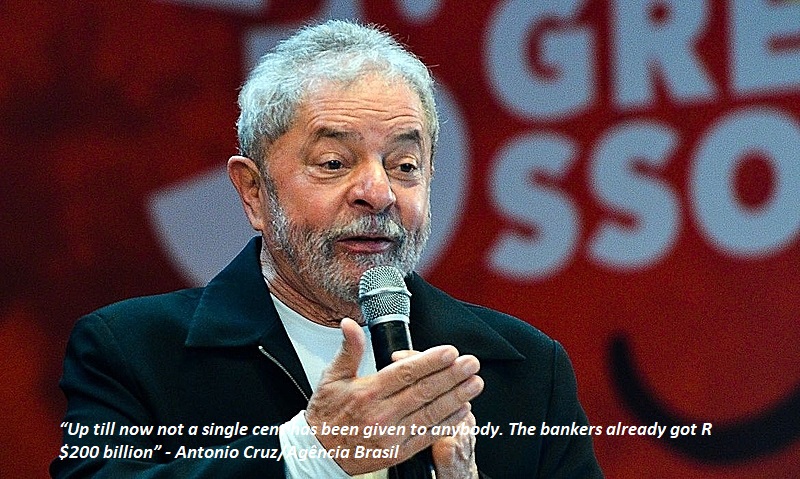 Former president Luiz Inácio Lula da Silva hardened his tone against president Jair Bolsonaro and the government’s responses to the pandemic caused by the novel coronavirus, as well as demanding solutions for the worsening crisis in a public interview, given to alternative media outlets on Wednesday, April 1st.

The need for an emergency basic income package to rescue the most vulnerable of workers, was one of the main points highlighted by Lula. “The money never arrives. The only money that got somewhere quickly was the one meant to help Brazilian Bankers. This is the dilema. You have a government that doesn’t want to govern,” affirmed da Silva.

Last Monday (March 30th), the Senate approved a proposal for the creation of an emergency basic income, in the face of the worsening coronavirus crisis affecting the country. Bolsonaro refused to sign into law.

“Up till now not a single cent has been given to anybody. The bankers already got R$200 billiion,” stated the former president. In the face of this, Lula recommended that the Chamber of Congress create committees to oversee the dispensing of funds, and that they, alongside the Senate, be more protagonists in combating the coronavirus crisis.

Measures to slow the spread

Luiz Inácio emphasized that social isolation is the best way to avoid the transmission of covid-19. However, since the start of the outbreak, the current president has been defending that the best practice is vertical isolation, that keeps only those most at risk isolated.

“It’s difficult to see this crisis ending with all this uncertainty. The first thing is to convince people that isolation is the best way to avoid transmission, but Bolsonaro still doubts that and continues to sow that doubt in society,” asserted the former head of state.

“There are people who can go two months without a salary, some can get by for a month, but some can’t even go 15 days. It’s already been more than 15 days. On one side, prioritize isolation; on another, free up resources so people may continue to have food to eat,” he pointed out, noting that president Bolsonaro is incapable of accomplishing either of those tasks.

“Up until now we have problems with face masks in Brazil, and an even more elemental problem which is testing. We haven’t even done these basic things. They are burying people without ever knowing if it’s a case of coronavirus or not. So the first thing that needs doing, is organizing people, getting resources for healthcare, to cover the costs of living for workers, free this money up so it can get to people. None of this has been done,” adds da Silva.

For Lula, the daily demonstrations that have been taking place since the start of the crisis caused by the pandemic, show that society is dissatisfied with Bolsonaro’s response. When asked about a potential impeachment, the former president said that it is first necessary to prove that indeed a crime was committed, so the “same thing that happened to Dilma” doesn’t occur.

“I don’t want to be irresponsible like they were with Dilma, without crimes being committed. If we prove he committed a crime, we must first ascertain exactly what crime was done, since not everything I think is a crime is seen in the same way by the judiciary.” Lula says he is “convinced” that Bolsonaro must change his behavior, or he cannot go on governing.