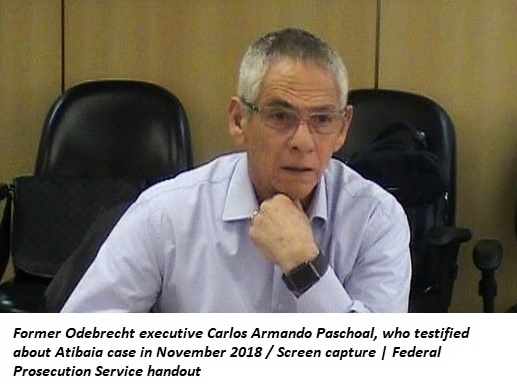 A plea-bargaining executive who testified against former president Luiz Inácio Lula da Silva in 2018 told a São Paulo court earlier this month that he was “virtually coerced” by Car Wash prosecutors to “produce an account” to incriminate the Workers’ Party leader.

Carlos Armando Paschoal, a former managing director of the construction company Odebrecht, was testifying for another case on July 6 when he was asked about what motivates someone to turn state’s evidence. The executive replied they should “ask the Car Wash prosecutors.”

Mentioning the case against ex-president Lula that resulted in a 12-year prison sentence for graft and money laundering – in which the popular leader was accused of benefiting from bribes through the renovation of a rural property in the city of Atibaia, São Paulo state – Paschoal said he had “absolutely nothing” on it. “I was virtually coerced to provide an account of what had happened. And actually, in that case, I identified the engineer to carry out the renovation in the property. I had to produce an account.”

Paschoal said he was forced to say “this and this and this happened, and I appointed the engineer to do the work.” The executive did not provide more information about the case.

The account Paschoal mentioned is a testimony he gave in November 2018 to the courts in Paraná where the then judge Sergio Moro sat – Moro was later appointed as Justice Minister by the Bolsonaro administration and has recently been exposed for colluding with Car Wash prosecutors to convict Lula without evidence.

In the account he now claims to have “produced,” Paschoal said he was asked by Odebrecht upper management to “help renovate a house in Atibaia that, as he told me, would be conveniently used by the then president.”

The former Odebrecht managing officer told judge Gabriela Hardt, Sergio Moro’s substitute on the bench, that the company’s involvement in the renovation could not be revealed. He also testified that another Odebrecht executive, Alexandrino Alencar, had asked him to support the renovation works. “That kind of request comes from way higher ranks, you can’t question them,” he said at the time.

Paschoal was convicted for money laundering in the case and has to serve a 2-year prison sentence under open conditions, on a curfew.